Wow, just a little bit of everything today. A very eventful day on tour.

Up at the crack of dawn this morning. Phil made black coffee and I added some Pop-Tarts for calories. We made our way out onto the streets about 6AM just as the sun peeked over some nearby trees.

Eastward on NM12 and immediately into climbing mode. The route is especially pretty in the morning, cut deeply through a few rock walls. The long morning shadows in shades of orange were a sight. 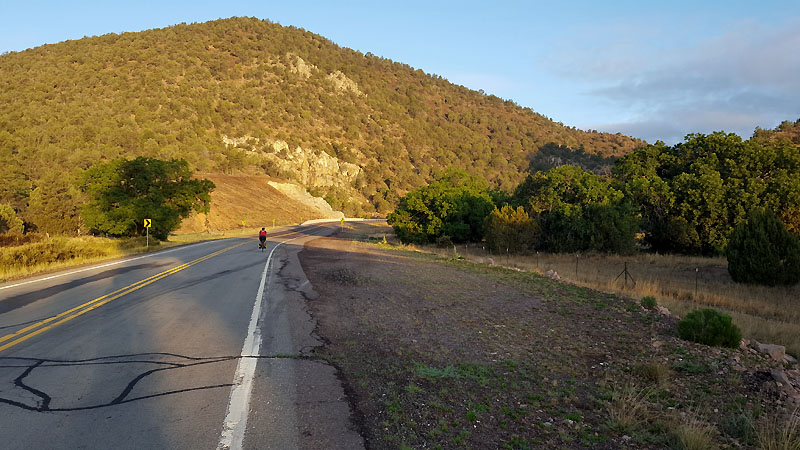 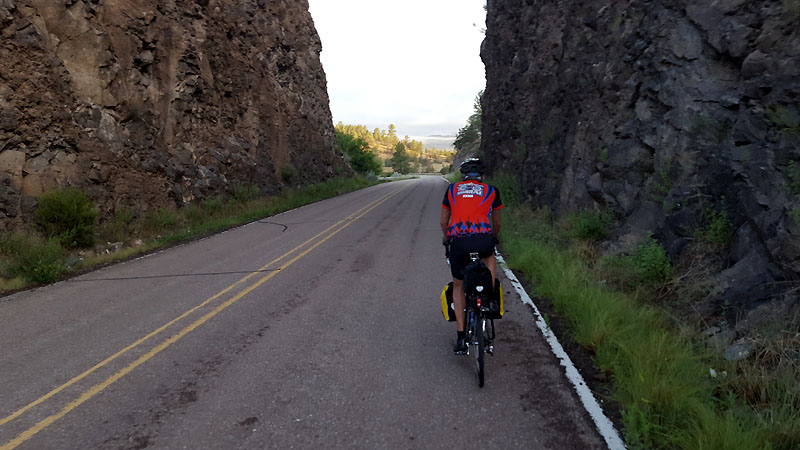 This first climb is a real doozy, about 2200’ in 12 miles. I stopped first at the 7 mile mark where NM12 hits US180. During the regroup wait, I checked out a slew of cattle in a nearby forest corral, who were not too happy to have me sitting there. The alpha-male finally started bellowing and trotting, and every other cow in site followed him away. For the whole duration I sat, the bull never stopped its calls far into the woods. 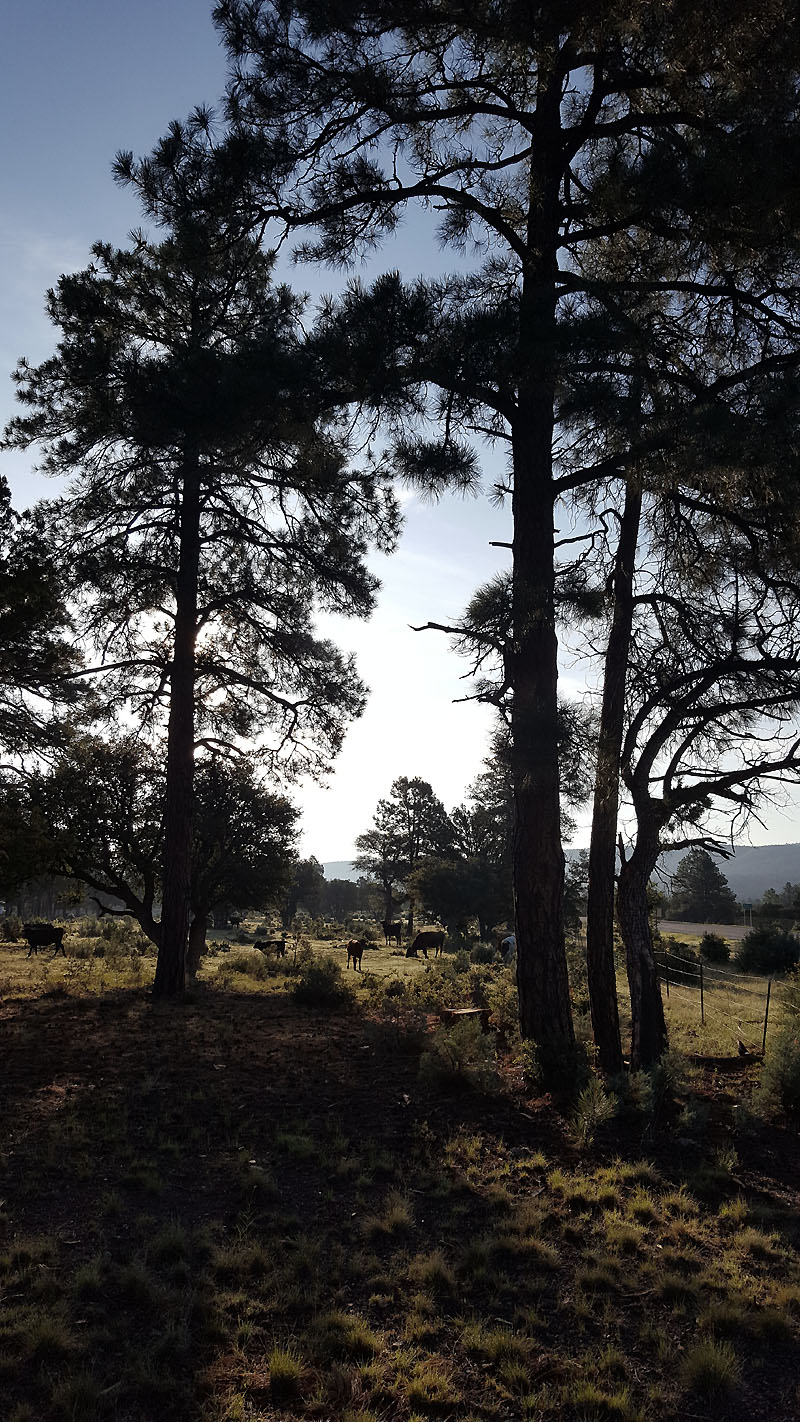 Three more granny miles, and I stopped again to regroup. The wait turned into 20 minutes, but the solitude and serene silence around me was enchanting. When I finally spied Phil I understood – he’d decided to walk part of it. 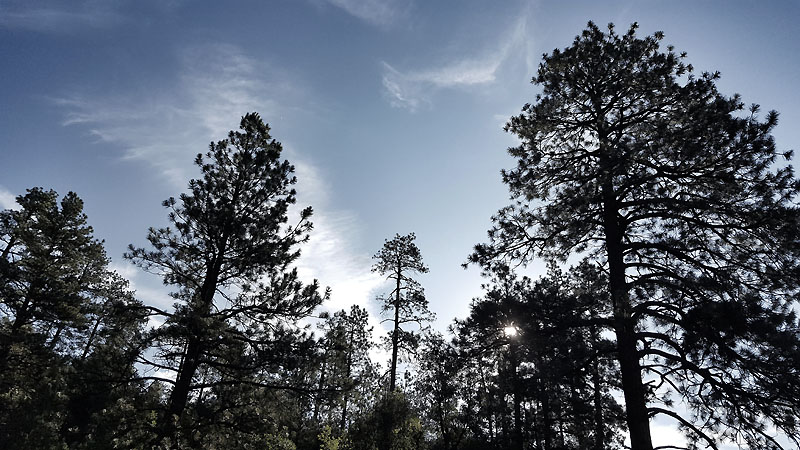 Another three miles took me to the top and a scenic overlook, where I waited another ½ hour for Phil, who again walked a fraction of the ascent. That’s OK – ya gotta ride your own ride. We have a long way to go today and there is a need to save something in reserve.

A ripping descent, for at least a few hundred feet. The turns prevent one from completely letting go (well, Jack might have anyway), but it sure was fun. The descent flattens but continues through beautiful scenic country all the way to the tiny berg called Luna, where we again regrouped.

A sign declared 14 miles to Alpine and Google Maps declared a 1000’ climb directly ahead. I knew Alpine was in Arizona so the state sign would fall somewhere in there. Another good climb it was, requiring granny gears for at least 2/3 of it. The Arizona state line falls almost exactly at the summit, where the terrain then turns into an alpine meadow and the shoulder gets nice and wide. Once again, way to go Arizona. 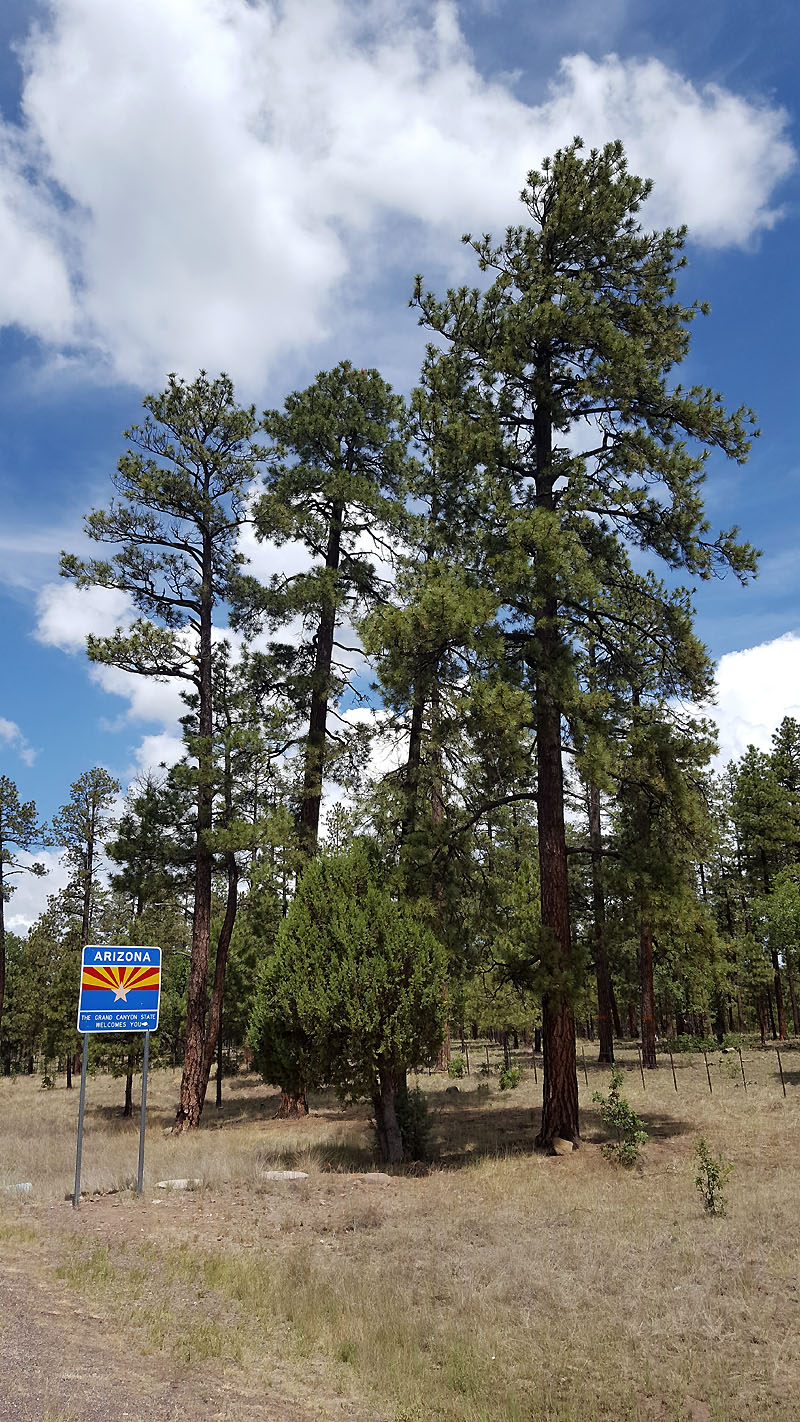 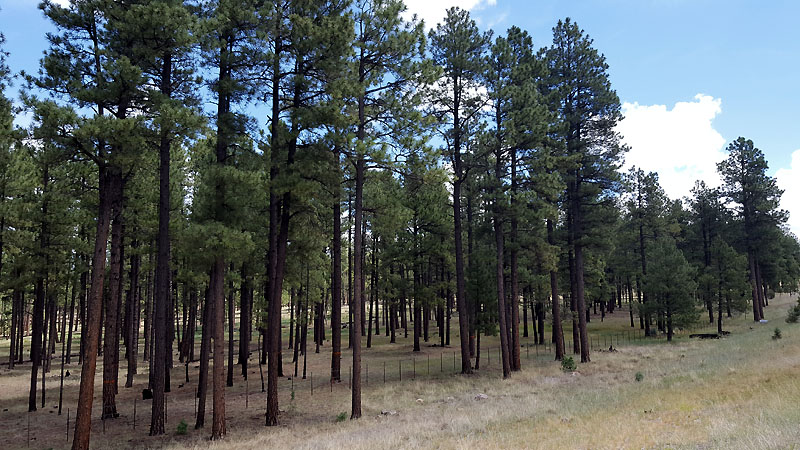 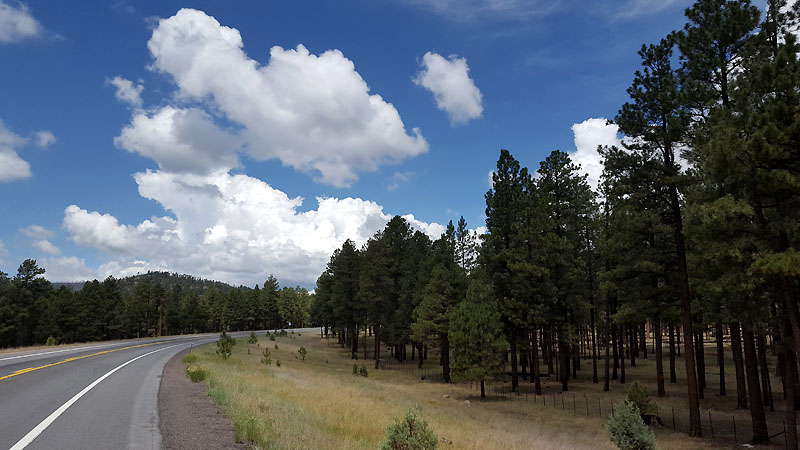 From there it is a wonderful mild 7 miles into Alpine. I found the Alpine Grill & Still about 11:30AM, then texted Phil where I was. What I got back was, “I’m not going to make it.” Not sure what that meant, I asked him his position, and he declared Mile Marker 0 (at the AZ line). Great I thought – all the hard work is done – so I texted back that I’d wait here at the grill.

Good burger, 4 giant lemonades, with golf and Diamondbacks on the tubes. Nice stop. About a quarter til 1, I decided that I’d better get rolling towards Springerville. I knew that Phil would want to eat and recover for a while, but from his message I didn’t know if he would continue. So I texted him to meet me in Springerville, or suggest another good place to meet on the route.

Emerging, the skies north of me were very dark, so I made preparations to get wet, donning seat cover and getting my rain clothes out. As I did so, Phil rolled in with a grin, looking happy to get to lunch and off the road. We agreed that he would eat and rest and then text me where to meet, possibly further up the route.

It’s a 500’ climb directly out of Alpine. A tenth of the way up, I stopped to put on my rain jacket, in the nick of time as the drops started in earnest. Cars rolled by in the opposite direction with Samaritans calling out, “Hey, you’re gonna get wet!” Yeah no shit. One guy yelled out, “Turn around – it’s bad up there.” Aw c’mon how bad could it be?

The rains got heavy and then heavier still, as I trundled upwards in full granny gearing. Gusts of wind occasionally slammed in, followed by strange pockets of calm, while the rains raged. It was one of those situations where you just smile inside and think – I can do this. Thunder boomed and lightening flashed, but never too closely together. My shoes filled up with water and my helmet brim dripped. Sunglasses completely fogged over and were eventually tucked away.

Another guy slowed beside me, “Want a lift?” Me <grinning>: “Thanks a lot, man, but, I’m loving this.” And I really was, although it’s nice to see such kindness on display.

Just when I thought things might be getting better, I saw one of the raindrops bounce on the road. Nah, must be my imagination. Then it started in, a full blown squall of hail. This was little stuff, the size of barley, the stuff that stings. Soon the shoulder was white with it and I started wondering if traction would be an issue.

And then, in only minutes…it got better. Supremely better. The ice and rains and winds died away. The clouds became a dark swirl with blue beneath. I continued laboring up the hill with an even bigger smile on my face. (I knew it would get better.)

Better still, past Alpine Divide, the next 22 miles to Springerville involve a drop of over 1700’, with only one 300’ hill in the way. The storms behind me created a tailwind that added to the fun. Think 20 mph for free on a big wide shoulder, and even more if you push a little.

New big black storm clouds were threatening to dump again as I approached Springerville, but I kept sizing them up and decided I could make probably it. 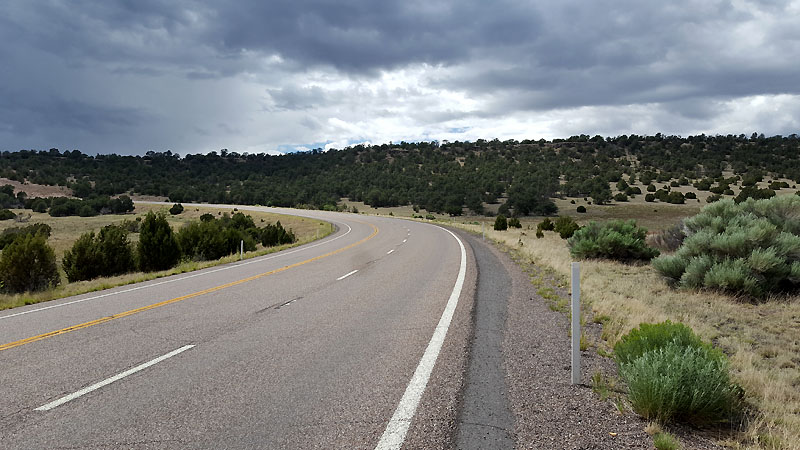 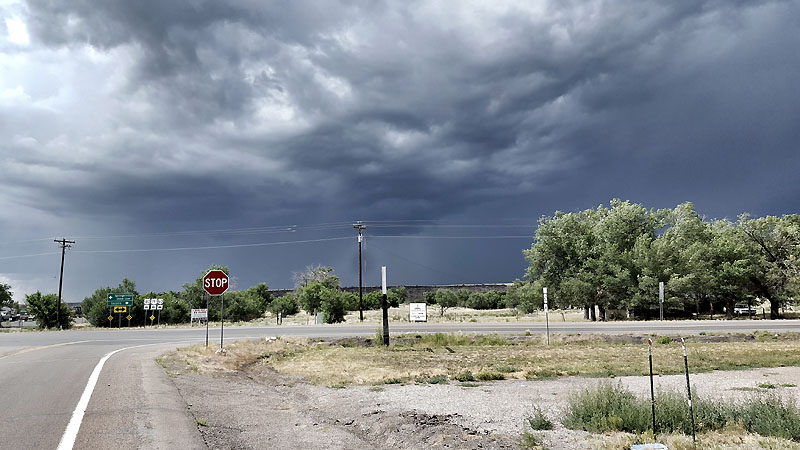 At the SUV, with the bike unloaded and mounted, I then texted Phil. He was still at the grill in Alpine. I felt a little bad that he’d had to wait so long – it had taken me almost 3 hours to get motoring, but then I guess we both knew what it would take.

Quick stop for iced coffee, then a quick drive back to Alpine. Phil had had 3.5 hours to kill, so I half expected he’d be on his 5th beer at one of the local taverns (I would’ve.) He wasn’t, although he said he considered it.

Tour Takeaways: This has got to be one of my favorite routes in Arizona. Lots of variation, scenic beauty, a fairly challenging profile (distance plus wind or climbing or both), and some interesting places to stay. I love the remoteness of these roads, riding practically all day long passing no businesses, which challenges one’s self sufficiency. I’d do this ride again for sure.

There are some places to tent around as well – which is a possibility for the future.

It was fantastic training for our upcoming tour. Compared to 2008 and 2010, riding a loaded rig was more difficult, especially the climbs. That not only means good conditioning for the body, but for me, it provides an exercise in execution and patience, a re-discovery how best to use the bicycle and limited physical abilities to accomplish a goal, however slowly.

Phil really enjoyed the ride too. He’d never ridden in New Mexico before and never at this high an elevation. He said the route was more difficult than he’d imagined,  the most challenging he’s ridden in fact.