Record heat in Phoenix today. Here in July that’s saying something, as the thermometer topped out at 118F (48C).

Instead of fighting it, Phil and I jumped into the SUV and took off for Flagstaff to get in a training ride. In searching for bicycle routes online, I stumbled across a map from Absolute Bikes describing a Lake Mary and Mormon Lake Roads route as “the classic Flagstaff road bike ride.” Our quest for the day was thus set.

We breakfasted and staged at the IHOP near the intersection of I-40 and I-17, and were soon on our way southeast on the superbly wide bike lane of Lake Mary Road.   Light headwinds and a few modest hills greeted us, but the scenery was beautiful, with blue skies, heavy white clouds, and tall Ponderosa pines. Getting out of Phoenix’s heat was a real blessing, even though it was still a warm 88F here.

The route rolls by Lower Lake Mary first, then around a long crescent of Upper Lake Mary. I’d half expected to find these lakes dry this time of year, but there was plenty water in both. Humans and herons plied the waters for fish. 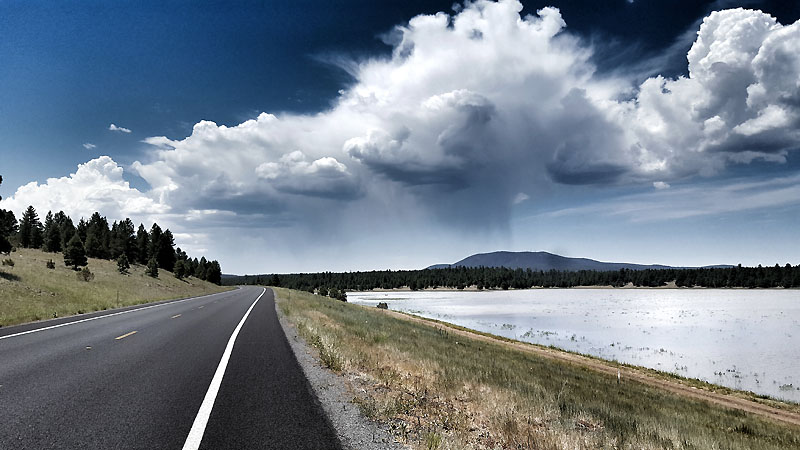 This ride is about training for our upcoming tour, and an important lesson for me is to re-learn that certain patience one must have pedalling distances. My short training rides at home usually involve some pushing, in an effort to extract the most out of training. But here, one re-learns to take things easy, look around, stop often, and always be saving a little bit for the next hill. 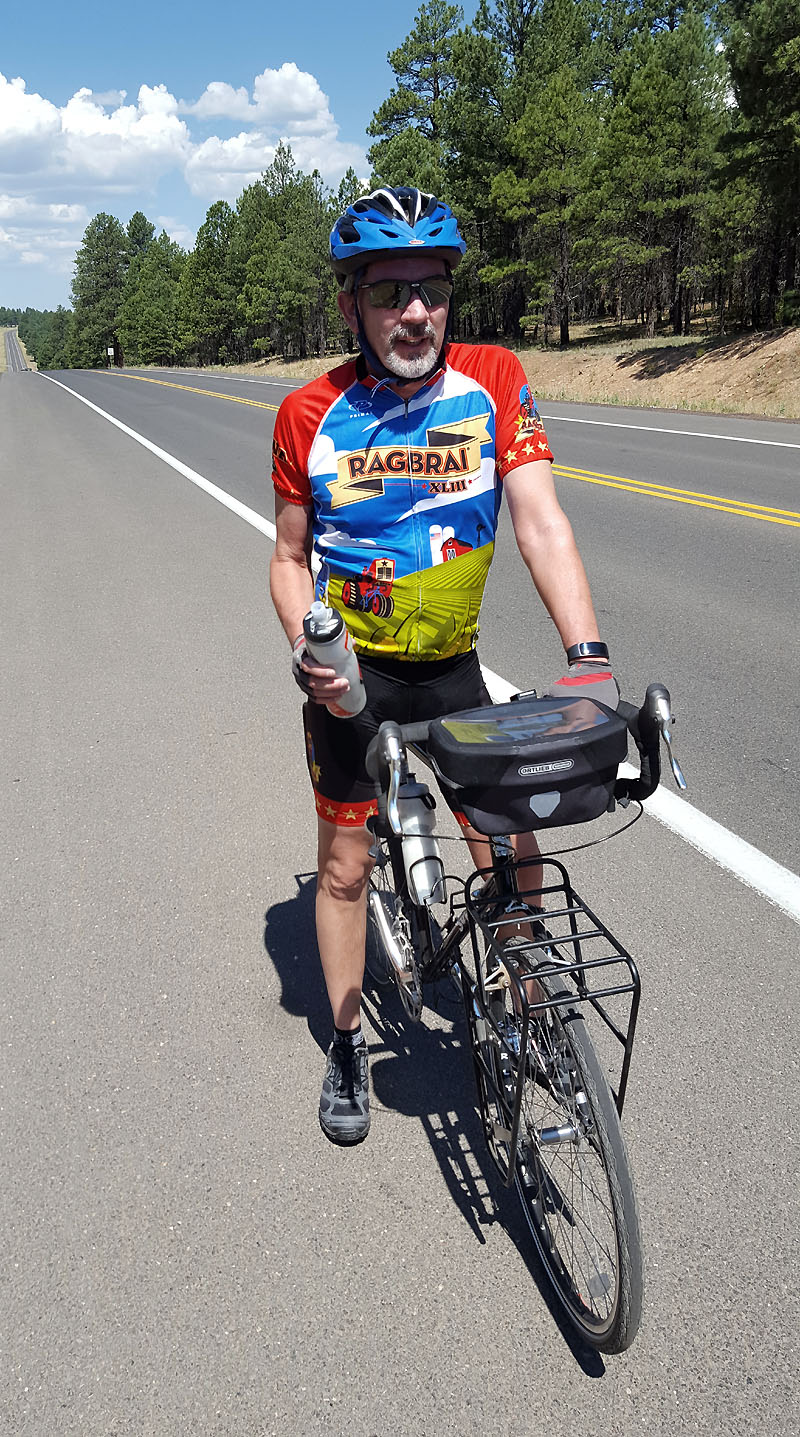 Phil and I regrouped a couple times on the way south, then again at the bottom of Mormon Lake at the turnoff onto Guard Station Road. We both liked the ultra-sleepy looks of Mormon Village and finally stopped for lunch at the Mormon Lake Lodge. 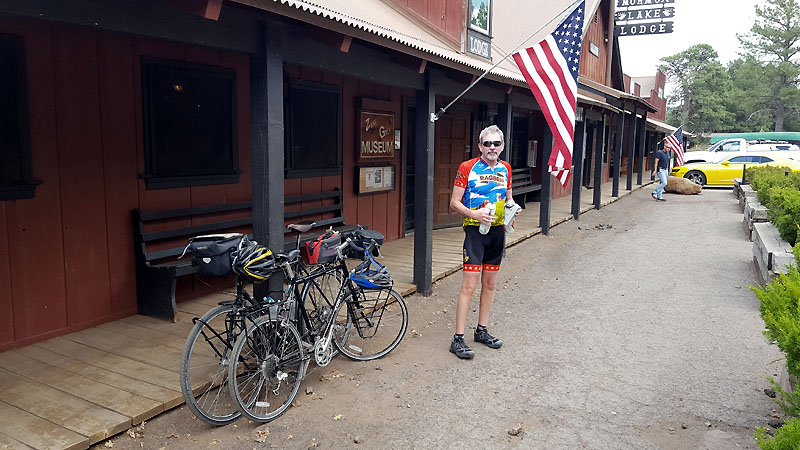 After a lunch of sandwiches and burgers (from a cute server named Haley) we continue north up the western side of the lake on Mormon Lake Road. We hesitated for a minute or two at unpaved Route 209, which makes a cut-off through the woods back to Lake Mary Road, but decided to plow forward. Ya just gotta love the Surlys! For 2 miles, the road got rocky and rough in many places, venturing close to mountain bike territory, but our Surlys handled it fine. Love these bikes! In fact, this was my favorite section of the route. I stopped twice to savor the ultra-silence of the woods, looking for critters and savoring where I was. 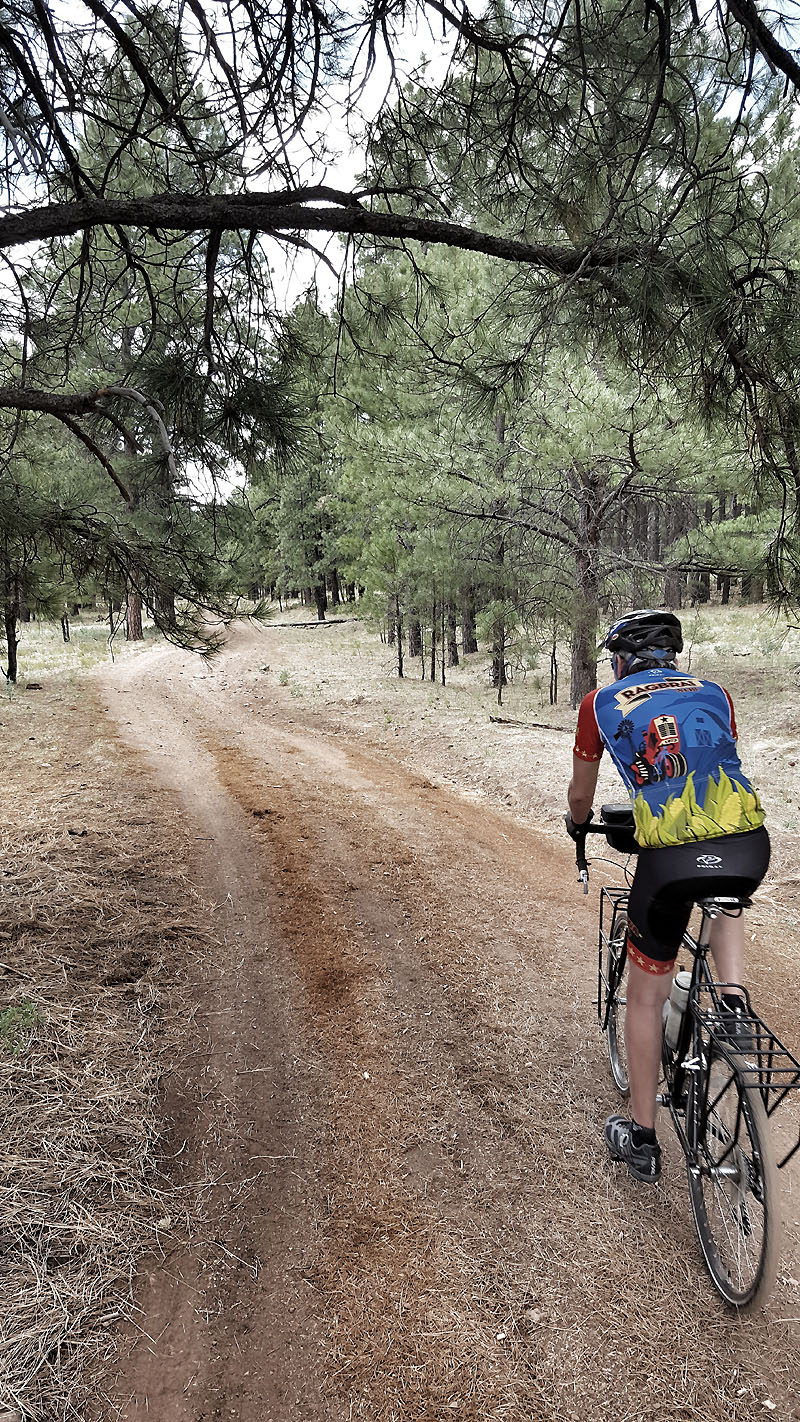 Back onto Lake Mary road, we re-traced our route back to Flagstaff, regrouping a couple times. Finished the day downtown at the Beaver Street Brewery noshing soft pretzels and craft beer. A very fine training ride! 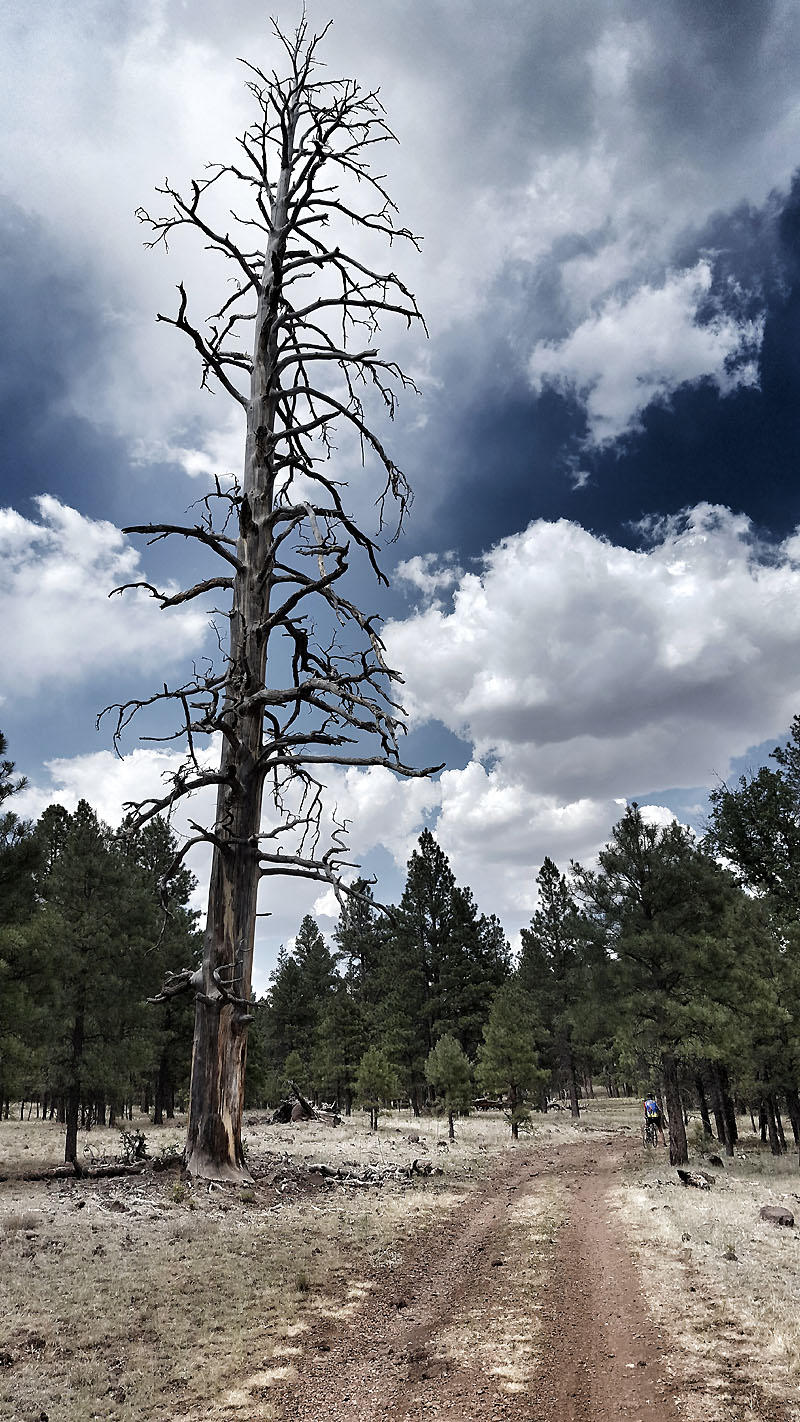 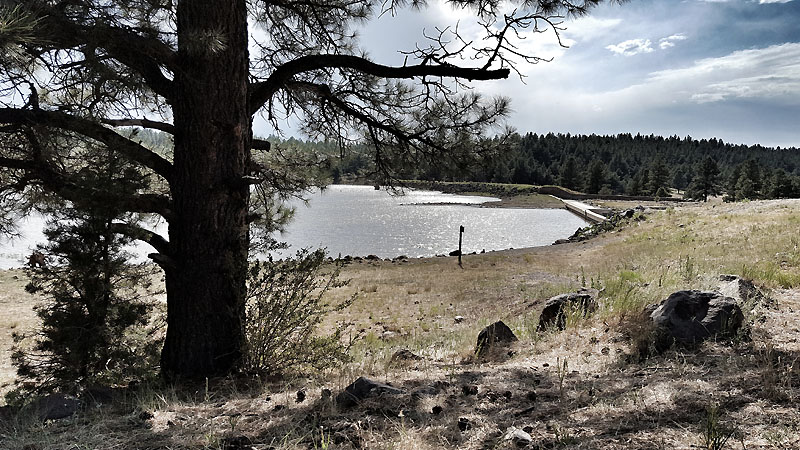 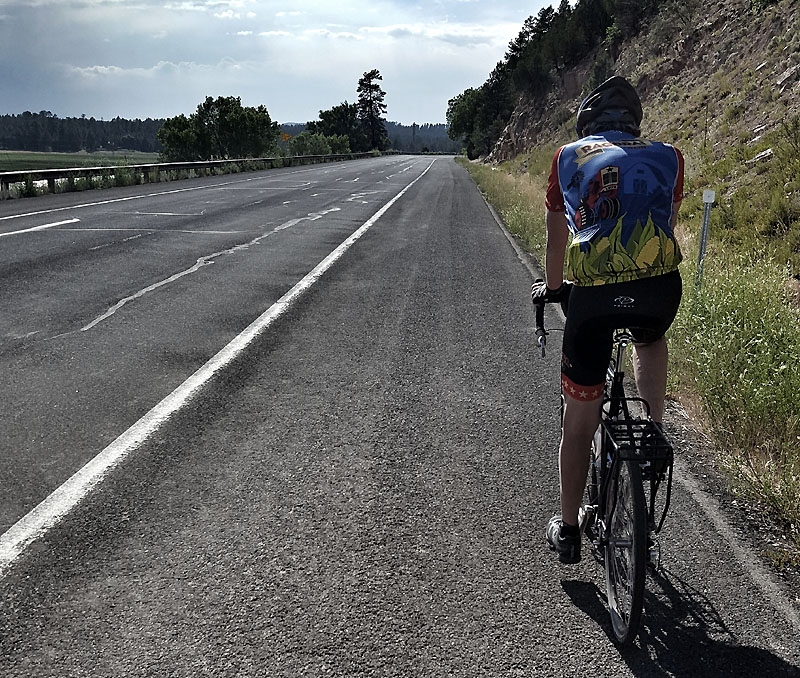 We needed this ride, too. Today’s total was 56 miles with 1,100 feet of climbing. And it seems the mild headwinds followed us around the whole day, adding another element to the workout. Still, we’ll face much tougher days in the Northern Rockies, and that right soon. 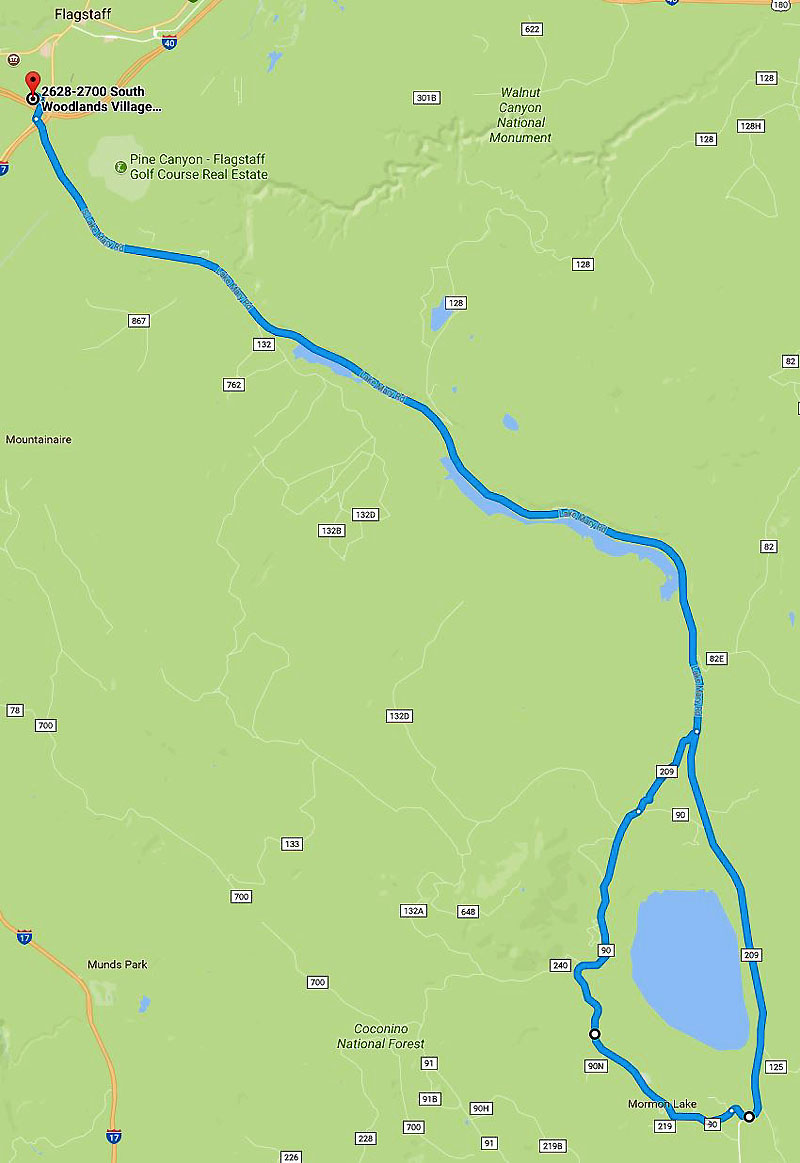