Breakfast at the hotel, then the long awaited ceremonial dip of our bike tires in the Pacific.  The beaches here in Washington seem particularly wide and open, which only seemed to add to the pomp and circumstance of the event.  Linda took a handful of pics, and created a billboard for the RA tour in the sand.   Running Down The Dream. 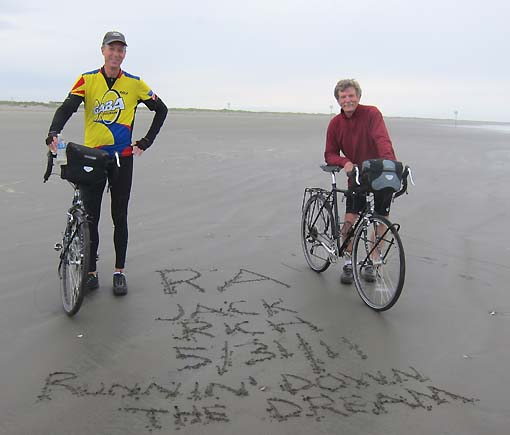 After some happy goodbyes, Linda finally hit the road and so did we, heading first to the local Tourist Information center and gas station to score some maps.  Because the roads into Ocean Shores looked treacherous for cyclists, Jack and I decided to head clockwise around the Olympic Peninsula instead of our original plan to go counterclockwise.

I’ll sum up the day’s ride as long, beautiful, and mostly chilly and wet.  Long as in 80 miles.  Beautiful as in roads lined with great old growth pine trees and roadside flowers.  And chilly and wet as in rain for more than 6 hours of the ride.

We arrived tired at our campsite in Kalaloch, WA, back on the Pacific Ocean, but at least a day closer to our departure point (off the peninsula).  We set up our tents right on the oceanfront, and I am listening to the sound of crashing waves as I type this.  The rains picked up in earnest as we ate a cold dinner of PB&J, so we ducked into our tents early.  If we’d had any plans of easing into the art of bicycle touring, those plans were shattered today.  We are OFFICIALLY on the road. 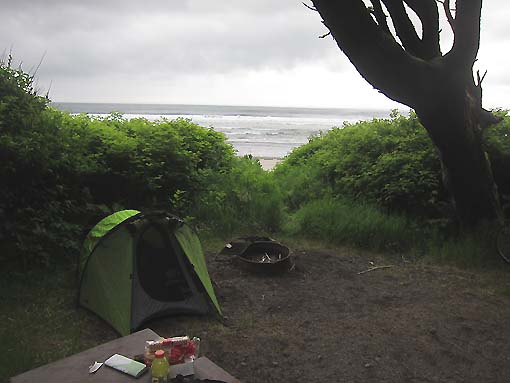 The Start of RA 2011, the ceremonial dipping of tires in the Pacific, and Jack’s first official bicycle touring day – certainly a long one at that. Topped off by camping on the oceanfront.  A milestone day.