The eighteen posts below cover this tour, ridden with my friend Randy Garmon. The two week tour went from Williston, North Dakota to Yankton, South Dakota in July of 2010. Dubbed “The Magical Mystery Tour” by Jack, this was my first self-contained tour (I loved it!).

Randy maintained a blog of his entire cross country trip called RideTheWhiteLine but due to wi-fi availability he didn’t post much about our adventures in the Dakotas. I decided to create the posts below to capture the memories. This blog contains photos taken by both Randy and me.

Afterwards, I rested for 3 days prior to Ragbrai, visiting Yankton, Vermillion, and Sioux City with my family in the SUV. Randy reached Sioux City on the 23rd and joined his Ragbrai charter group there, getting in a rest day himself.

Through the Dakotas, using my odometer figures, Randy and I rode for 14 days and averaged right at 60 miles each day. I was pretty comfortable with this, but in retrospect, it might have been beneficial to schedule a few more full rest days.

Riding with Randy was a blessing. I learned a lot from him, sometimes by word, but most often simply by observing his actions. I am grateful to him for opening up the door of bicycle touring to me.

I learned that a most beautiful thing about travel like this is the conversion of day-to-day routines into adventure, satisfaction, and occasional excitement. I absolutely loved this two-week tour. It created a thirst for more self-contained touring, and I often find myself thinking about possibilities, at least when not writing up useless travel memoirs.

This tour, plus Ragbrai, has really set the stage for a cross country assault next year with friends Jack and Jesse (and Randy if he wants to do it again). 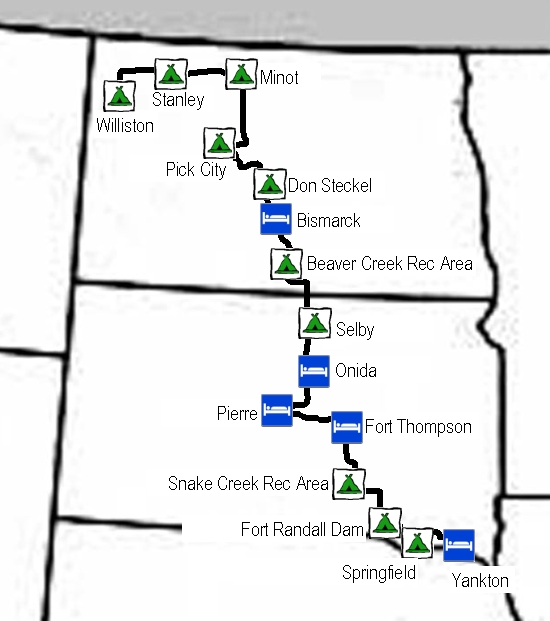