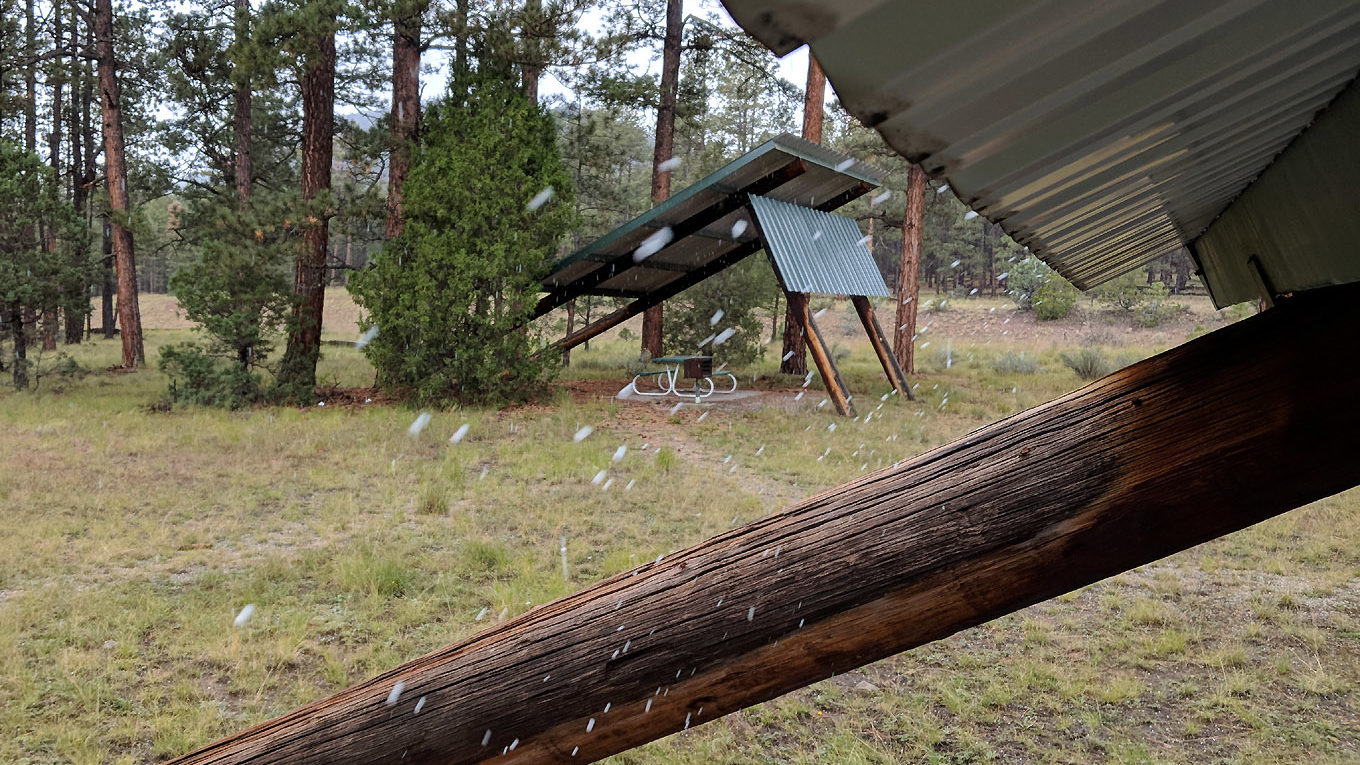 Morning breakfast at the Largo Cafe here in Quemado. Just like in July, the lady manger there recognized me again. Says she remembers all faces.

Winds today are forecast to pick up in the afternoon mostly from the west, so I’m a little concerned about the end of today’s ride. We shall see. Otherwise, the route today is a low grade 25 mile uphill all the way to the midpoint, then another 25 miles a low grade downhill.

The route starts out in open prairie south on NM32. I stopped at the Quemado Cowboy Church to re-create Isam’s award-winning photo, but couldn’t quite manage it with overcast skies.

It’s a fair amount of climbing, about 2,000′ in 20 miles, and indeed we got some mild head-breezes along the way. Fortunately, the route gradually enters a forest of ever increasing size trees that blocks the breezes.

Back in July, Isam and I were dismayed to find NMDOT dumping gravel out here – it made the riding mushy and a lot more work than it was supposed to be. Today I noted, however, that all the gravel had managed to work pretty solidly into the surface. Slightly increased rolling resistance still, but not so mushy.

The route tops out at Jewett Gap Campground and Rest Area where we stopped for a snack. Jack noted that we sat around 8,200′ in elevation. Pretty cold, too, well down in the 40s for sure, with snow still on the ground.

As we dined, we both heard a distant white noise growing louder by the second approaching from the south. What is it? Wind? Rain?

Oh my. Hail! Little pellet-sized stuff, the size that stings. Fortunately we weren’t directly out in it, but rather sheilded under one of those sloped corrugated metal roof things. The squall sure made a big racket on the metal! Had us laughing in wonder. And what perfect timing – it would have been horrendous to ride in.

A secondary result was a big drop in temperature. We estimated well down in the 30s. Out come the knit gloves, thermal layers, and rain jackets. My feet were getting cold too!

Fortunately the weather cleared up fast, although the temperature stayed depressed. Once out on the road, we again could hardly believe our luck in avoiding riding in that deluge.

Five or six miles of gentle downhills, then a few whopping drops. Suboptimal road conditions prevented even Jack from letting completely loose, but we both hit over 30 for a few stretches.

It felt good to reach the general store at Apache Creek at the 43 mile mark. Neither Jack or I really wanted anything much, but chocolate milk hit the spot. As close as we’ll get to a milkshake today.

I thought maybe these last 12 miles were going to be directly into a wind, but that was completely wrong. Winds were almost non-existent. The final 3 miles into Reserve are a wonderful downhill rip to the San Francisco River. Yip!

First order of business of course: Uncle Bill’s Bar for carbs. The same bartender was in there but she didn’t bother carding us this time. One good stop after a ride!

Check-in at Frisco Lodging. Rocky was on cable (yo!), which immediately captivated at least one of us for a couple hours.

This time around, Jack and I weren’t able to secure a room with a kitchen, and so would have to rely on a restaurant. We ended up at Carmen’s for some decent Mexican food, e.g. quesadillas and enchiladas. We observed perhaps the mopiest hangdog teenager I’ve ever seen slumping at the counter, face planted in his cellphone.

An early sleep tonight. We decided we definitely need to get going early tomorrow morning. Not only are there many miles to go and many feet to climb, but realistically only 10 hours to cover it all this late in the year.