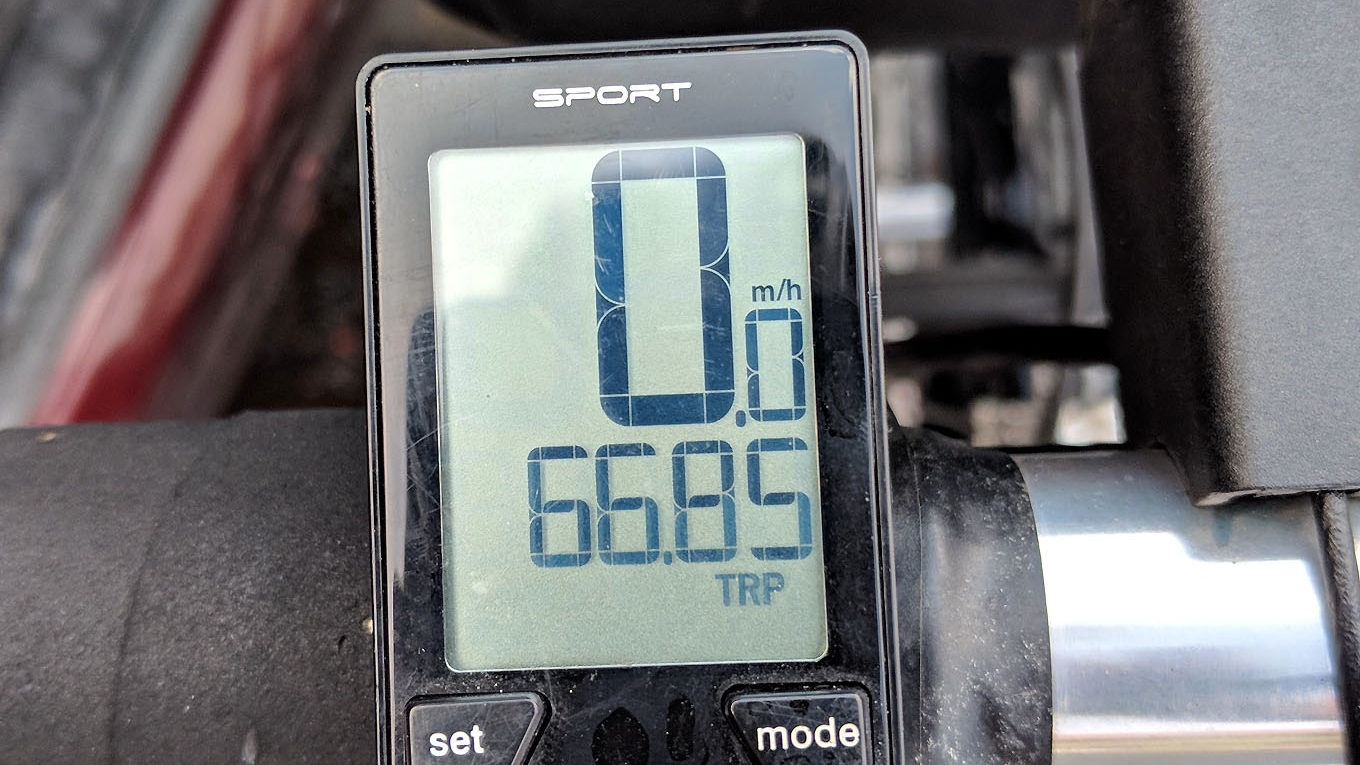 This is it! The other two days of this tour are splendid in their own right, but today’s route is the best, well, on paper anyway. Still, you never know what you’re going to get on tour.

Isam rose at 5:30AM to fix breakfast. Coffee, Spam, onions, red and green peppers. Delicious! How lucky are we?

No messing around this morning. Two and a half hours of steady climbing (and OK a few breathers) from 5700’ to nearly 8000’ . The route doesn’t climb one particular mountain, but rather up the eastern side of a ridge near Aspen Mountain and Prairie Peak Mountain. The slope is bearable, a very steady 6-8% all the way up. Isam was definitely stronger for this task, outpacing me comfortably on each segment. I doubt we were more than ½ mile apart at any moment, but only because he’d regroup with me.

We snacked at the top. Isam made a few adjustments and got bike grime on his hands. Lacking any soap and water, we used WD-40 to clean him up. This prompted a car tourist to offer him some antiseptic spray – he thought maybe Isam was spraying a wound. Many friendly people out here.

A thousand foot drop into the tiny community of Luna rolls over 7 miles, through beautiful old pine forests carpeted with green grass. Completely enchanting. Another slog awaits, back up the same thousand feet, to the Arizona border. Evidence of a 2011 fire are clear here, although the forest is growing back.

Six more gently downhill miles past Luna Lake itself to Alpine. A handful of huge lightening arcs grounded nearby in front of us, followed by near-immediate thunder claps. Isam later pointed out that the closer the thunder, the more the higher frequencies are preserved, which makes them more startling. Yes!

Just as we arrived at lunch and were parking our bikes, the skies opened up. Perfect timing once again. The Alpine Still & Grill provided us excellent eats (meatloaf, chili burger, German chocolate cake) and wifi too, a perfect harbor from the heavy rainfall. Isam noticed sleet in it too. We played a few games of 10,000 Dice.

A touring cyclist noticed our Surlys outside and came in specifically to meet us. He said he doesn’t see many of those. Turns out he is a former guide to Adventure Cycling Associations fully supported cross country tours , and he had lots of touring experience. He knew immediately we were riding the GABA Luna Lakes route, and had ridden it himself a few years ago.

We also exchanged pleasantries with a table of four ladies behind us. They laughed that we were certainly going to get wet (yeah probably), but assisted with weather information. We talked about wildlife, and one lady related a story about how she accidentally hit an elk. They told us to be on the lookout for elk especially up near Nutrioso.

The rains quieted down and we departed. Thirty more miles to go. Six hundred feet of climbing greeted us out of Alpine, peaking out at 8,550 feet elevation. As usual, Isam got out ahead and I half expected to see him at the summit. Nope. He later told me he’d figured one more top, but soon found himself streaking down the other side.

What a super fine descent! The route drops about 1300 feet but does so in beautiful fashion, spread out over 16 or 17 miles. Tall pines, lush greenery, alpine lakes, soaring birds. After each drop, you look ahead and lo and behold, there is another sweet drop. Add in a mild tailwind, and we were getting 20 mph for free, more if you pedal, for mile after mile. Fantastic. It doesn’t get any better.

I spied Isam’s bright yellow jacket out in front of me, so I knew we were not overly separated. I hoped we’d regroup at Nelson Reservoir, and sure enough, there he was in the parking lot. You know, this is his very first bicycle tour, and that guy not only is pretty strong on the bike but has very good instincts.

There is one pesky 250’ climb before Springerville. It wouldn’t be too bad except it turns 180 degrees during the ascent, directly into the winds. A test for me, more mental than anything. I was counting roadside markers and even pedal strokes in order to clock my way up. Isam told me later he’d distracted himself with a profound internal dialog. The hill rewarded us with another fine drop, aligned again with the tailwind, all the way to Springerville.

Almost 67 miles and 4500’ of climbing. What a super fine ride! Despite being underprepared for it, I think both Isam and I rode well. Sore, for sure, but in a good way. This 3-day ride certainly earned Isam a bicycle touring merit badge.  I continually found it hard to believe this was his first because he took to it so well.   Spending the time with my new son-in-law was a bonus for me.