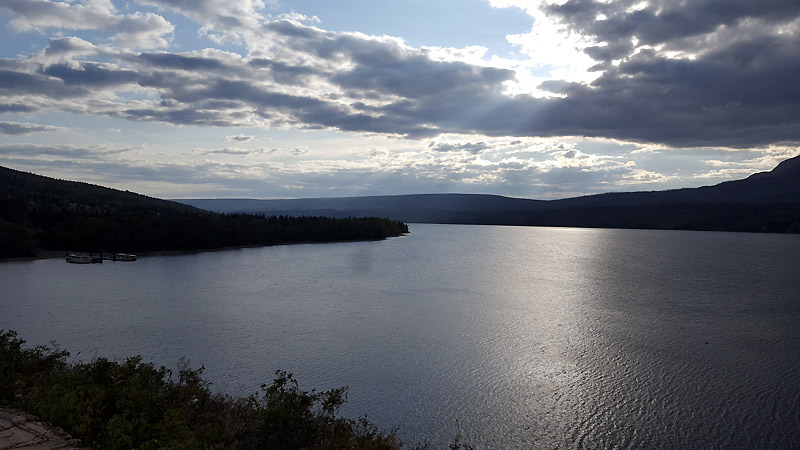 Up at 6, and we’re all ready to go by 7. We’ve had something like 14 hours of luxurious sleep, and I think we’re keyed up to get riding. This route up Logan Pass is an anticipated treat for all of us.

Jack and I had estimated today’s ride to be 36 miles while planning way back in Sparwood, but somehow we flubbed. It’ll be more like 55. At least it’s some consolation that we’re actually going up the pass the “easy” way, from the east. Should be around 2500′ climb for us, but it would be 3500′ from the south.

The ride starts with a slow roll around beautiful Saint Mary Lake. The early morning views are stunning and the climbing starts gradually. Slowly but surely, though, we downshift and soon I’m in granny #3 and then #2 and then #1. There is modest tourist traffic, and fortunately drivers on this road act very respectful, despite no shoulder. Numerous big red shuttle buses go extra slow and give us lots of room. They seem to regulate everyone’s speed and make the passage great for bicyclists.

Conditions are fantastic today too. Partly cloudy, clear air, and only slight breezes. Ideal. SO glad we didn’t try to do this yesterday in the wind and overcast.

The views. The views. Just ridiculous. The views are unbelievable. Phenomenal. Words fail. Jack proclaims this infinitely better than the Oregon Coast (not that we know) and that this is his new favorite touring day.

It’s about 17 miles to the top. The climb up the east side is actually very well graded, not terribly tough except in length. It’s a little surprising that we didn’t see any other bicyclists, except for a few near the top screaming their way down already. We did see lots of bikes, but they were all mounted to cars or buses. I think some bicyclists drive their bikes to the top, either by car or by shuttle, in order to enjoy the downhill. Well, who wouldn’t? 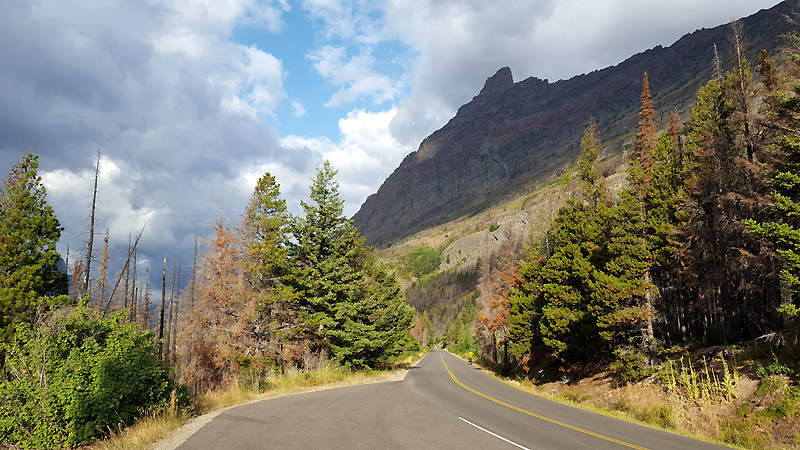 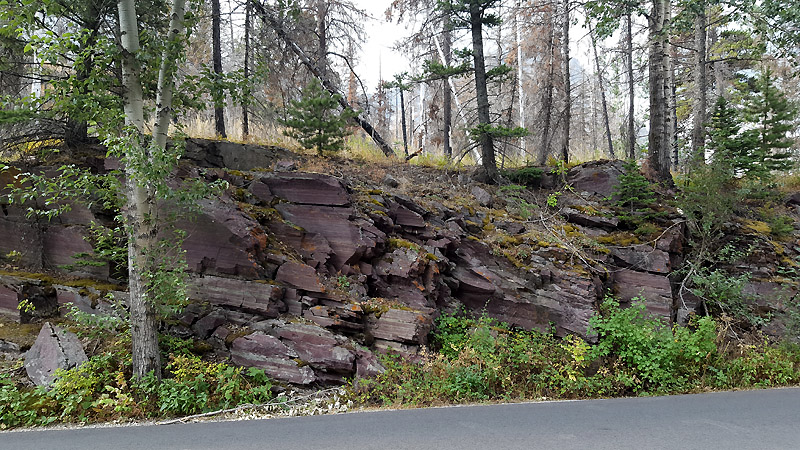 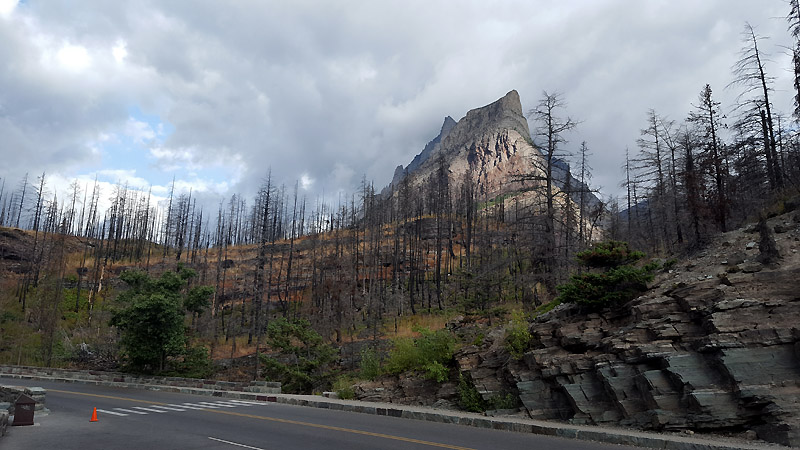 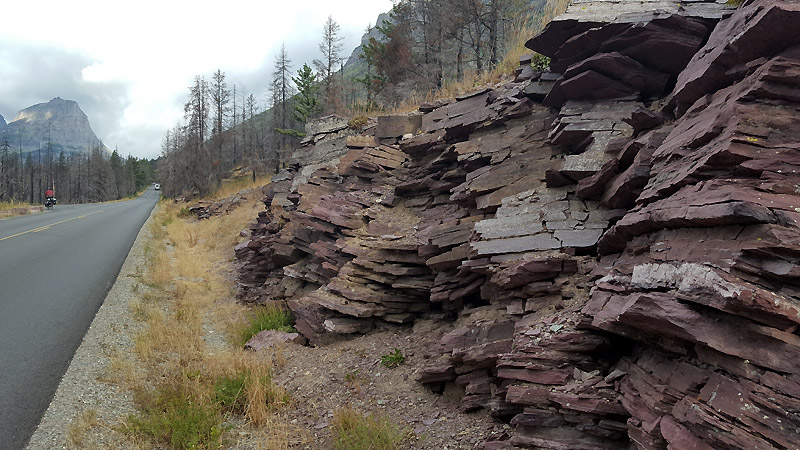 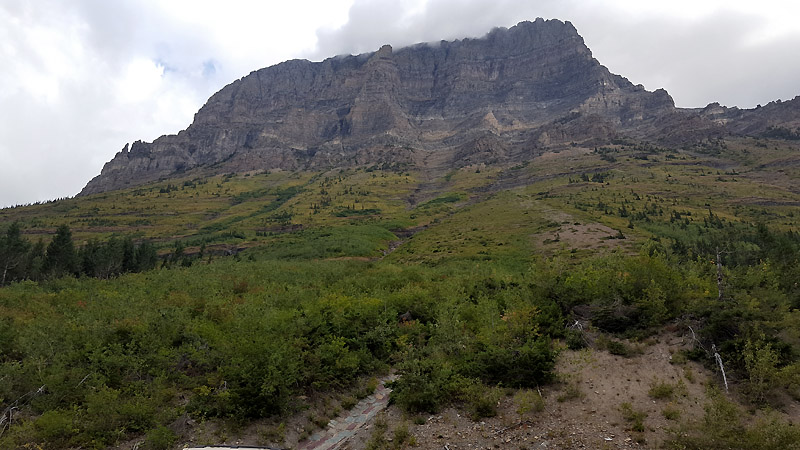 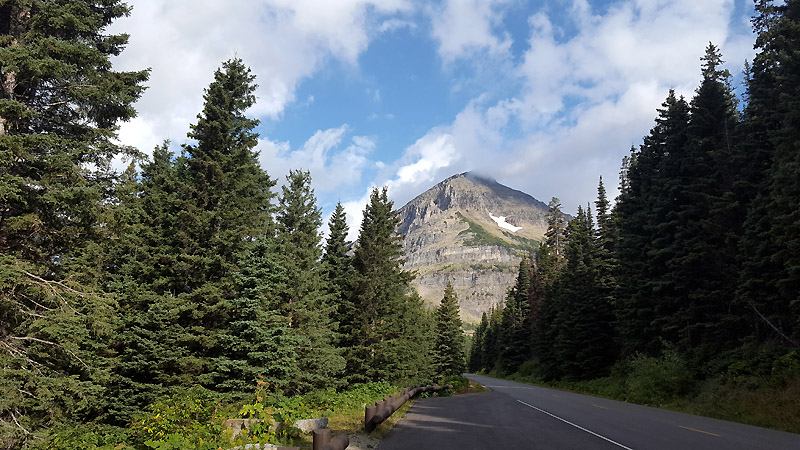 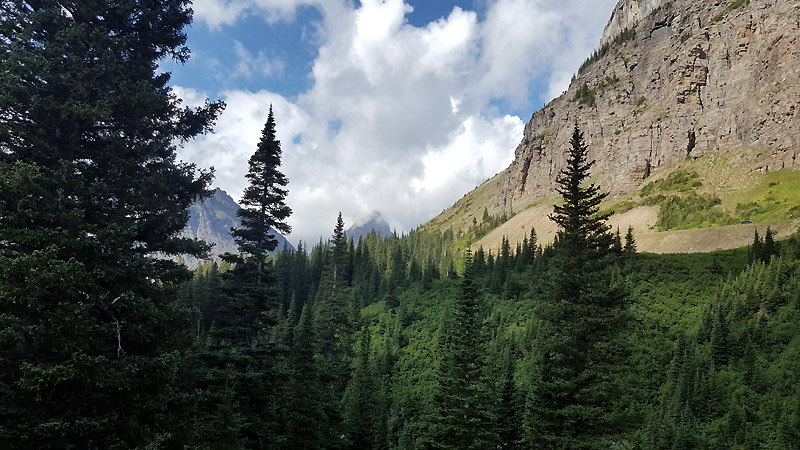 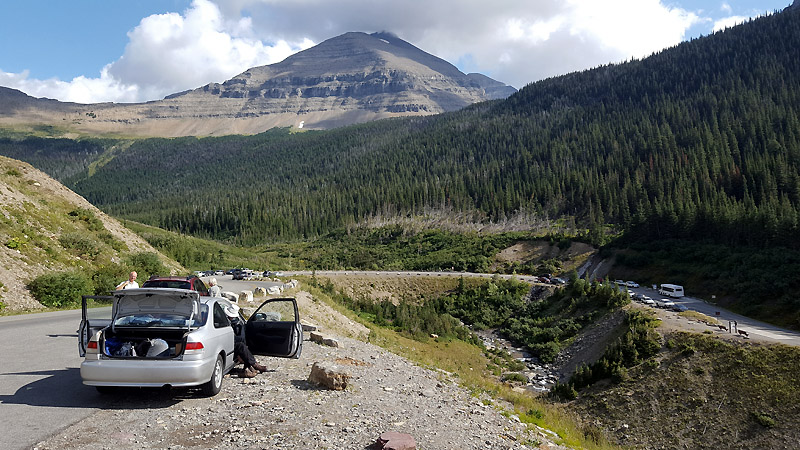 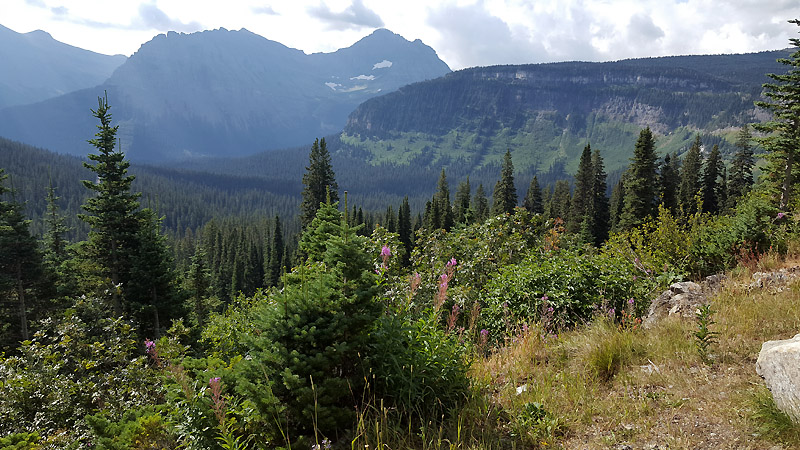 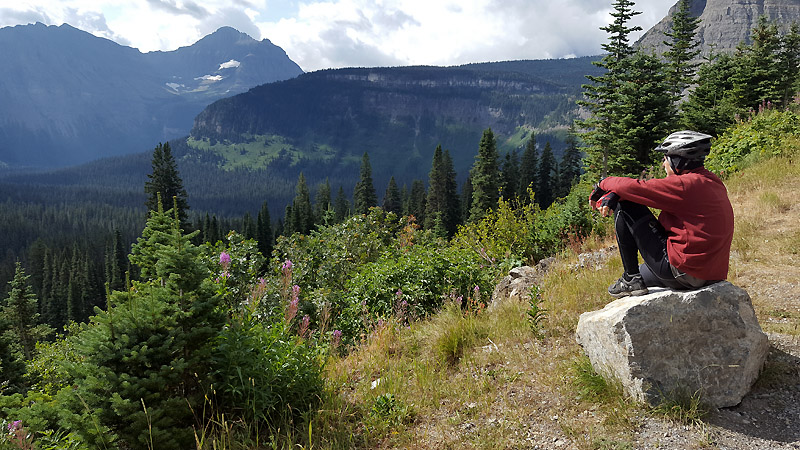 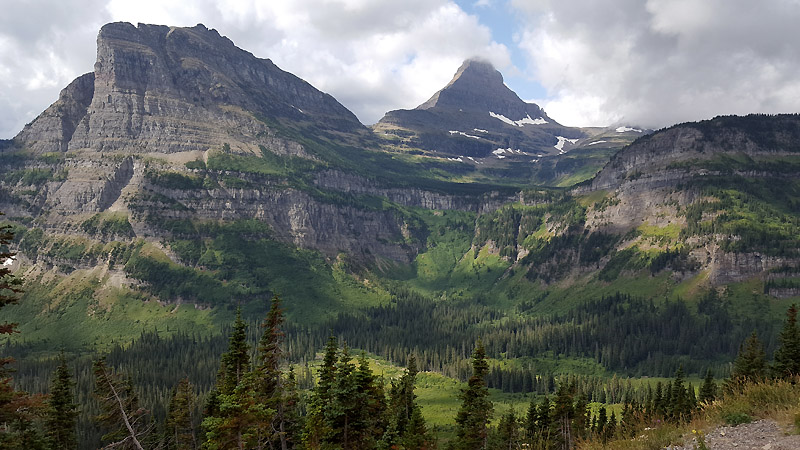 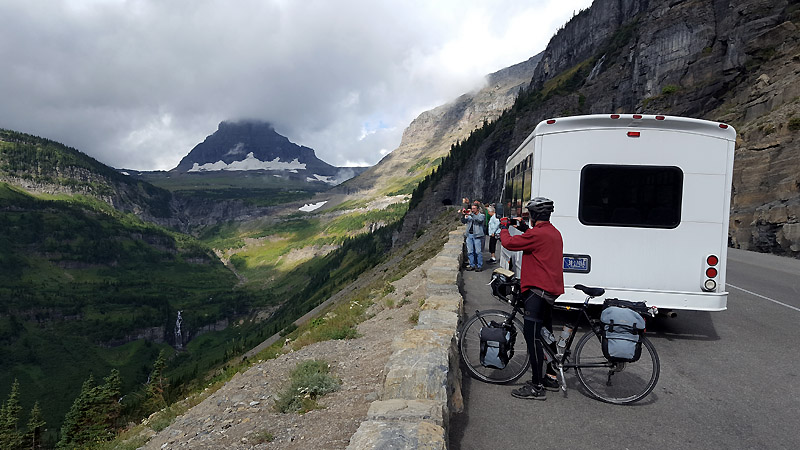 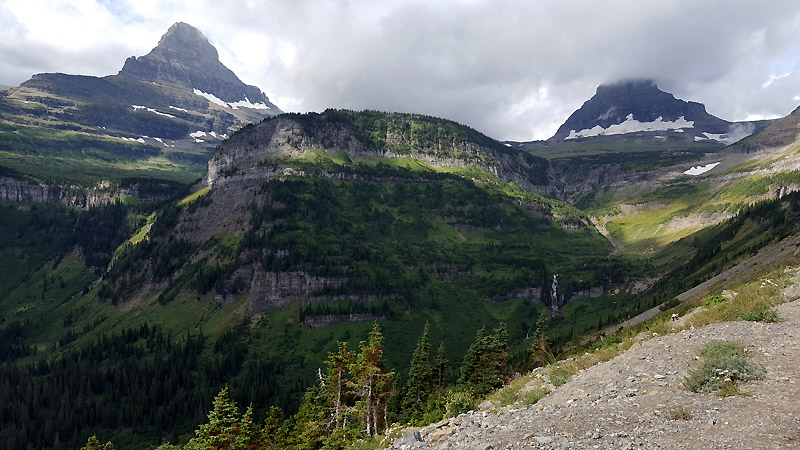 Near the top, Phil elects to walk a lot of it. There are some people (many of them good samaritans) who think he’s in trouble when he walks, but we know he is actually enjoying it either way. It’s all good – he’s on tour in a beautiful place and away from the office. Jack and I find lots of perches on the way up and really soak in the views. Million dollar views. Clouds keep altering the lighting in a glorious way, washing over the peaks.

A mile from the top is a short tunnel with great acoustics. Jack hoots and I chant, “Hi-ya, hi-ya, hi-ya, hi-ya.” In that last mile, we get quite a few “thumbs up” or “Gold star!” or other kudos from passing motorists. 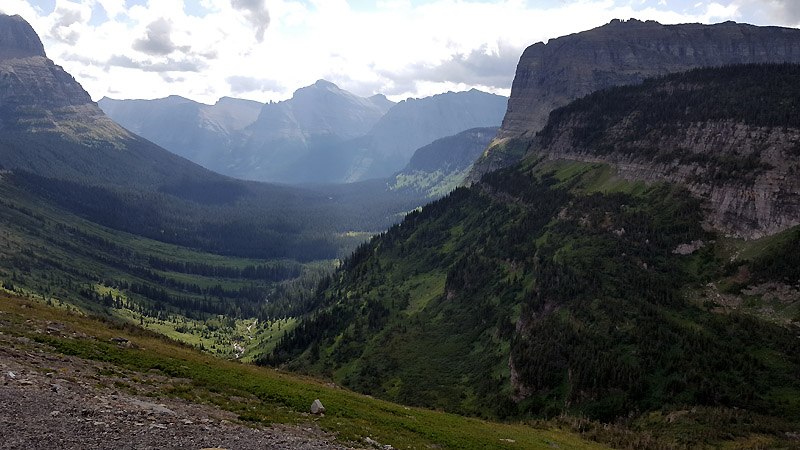 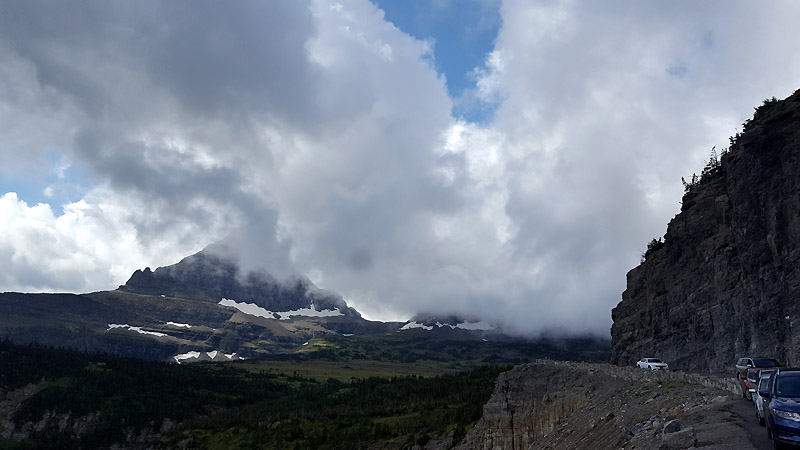 The Logan Pass Visitors Center is a bit of a madhouse. The parking lot is completely full and 20 more cars arrive every minute. Tour buses pull up every 3 minutes. The gift shop is packed. You get the idea. Alas, there is plenty of parking for bicycles. There are a fair number of cyclists at the top headed in both directions and it’s fun chatting with them.

Jack and I play with a handsome squirrel, later identified as a Columbia Ground Squirrel, offering it a few Fritos in exchange for a few photos. It even took a hold of Jack’s finger at one point.

Finally time to start the descent. OMG. It’s simply one of the most magnificent places we’ve ever seen. Gravity pulls strongly on our bikes and it’s all we can do to slow down, look around, and makes stops along the way. Jack and I must have stopped 10 times near the top alone, brakes squealing like wounded elk and nearly melting.

Glacier peaks, snow, cliffs, waterfalls, pines, dropping out from under us as far as we can see. Fantastic is an understatement. The best we can imagine. Surreal. The memory of this place will be with us forever.

Phil gets way out ahead. There is no cell coverage so we assume he’ll meet us up ahead somewhere. The downhill flattens out but keeps a negative slope for many miles.  Jack and I continue to stop regularly, run into some construction traffic and otherwise enjoy every second of the descent. 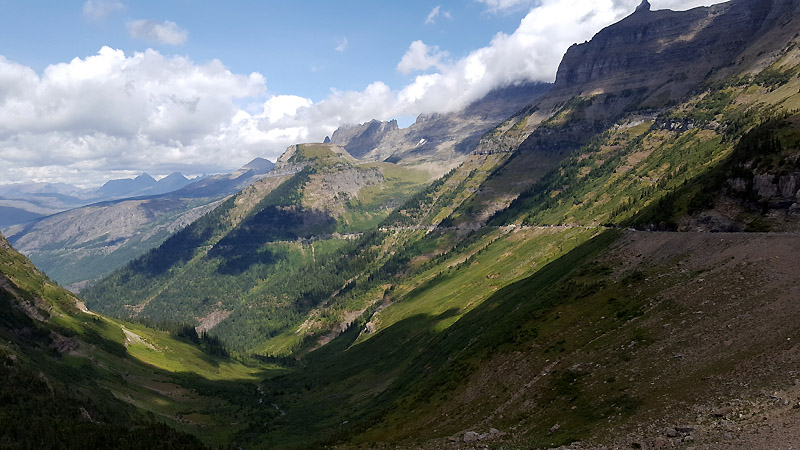 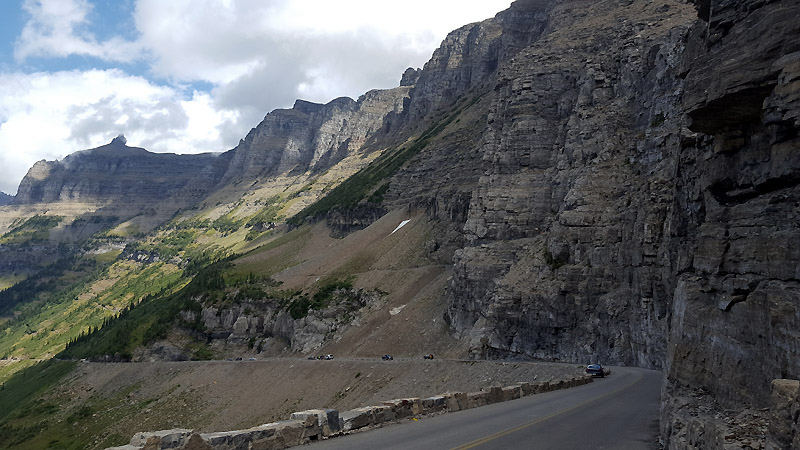 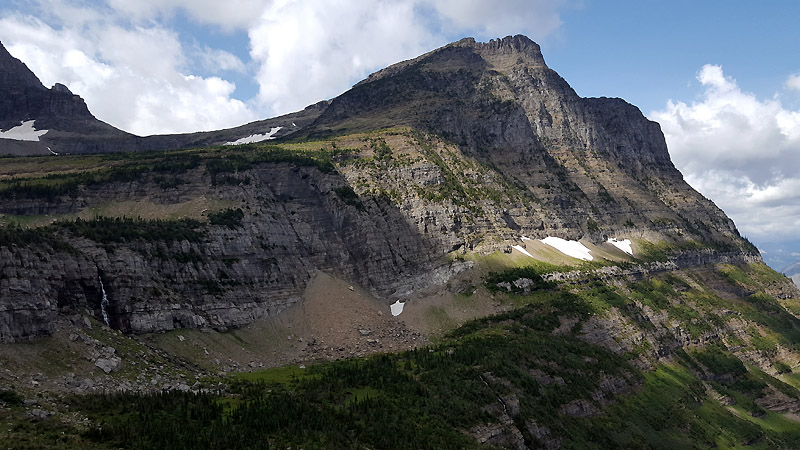 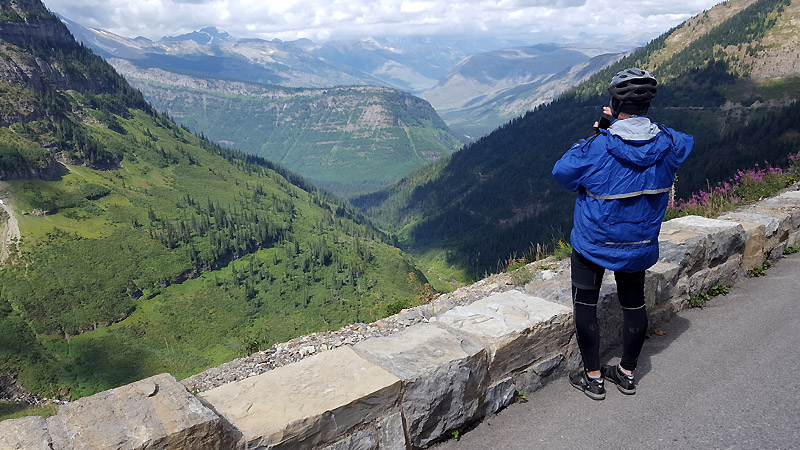 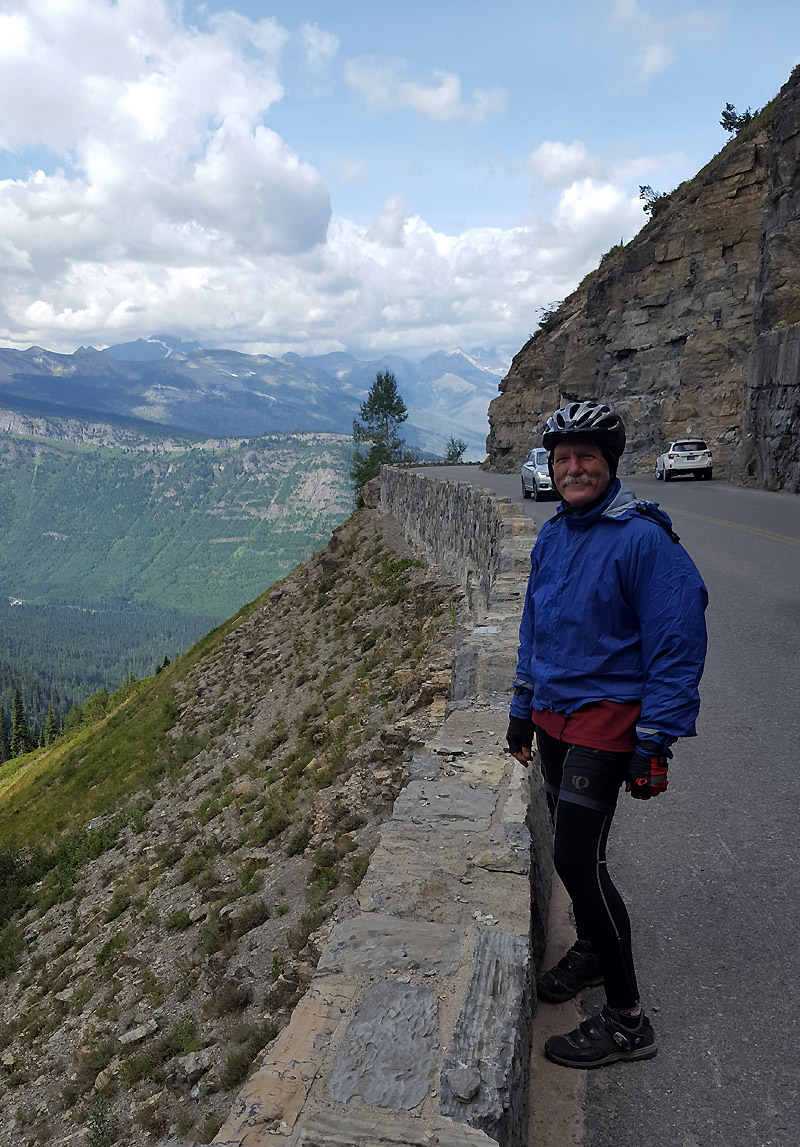 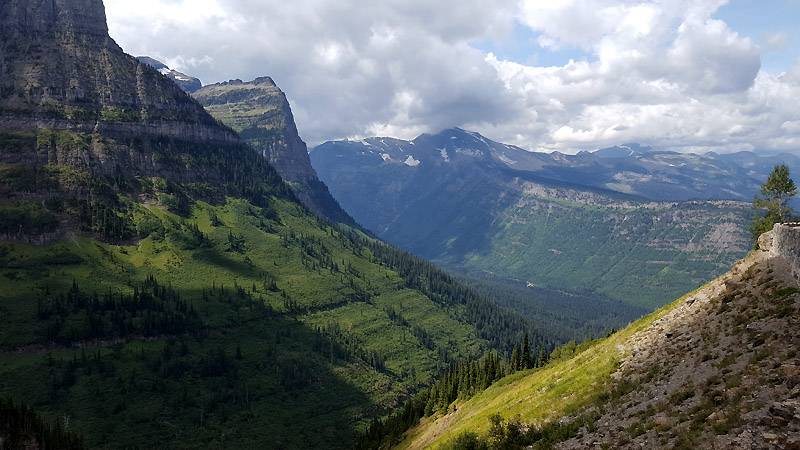 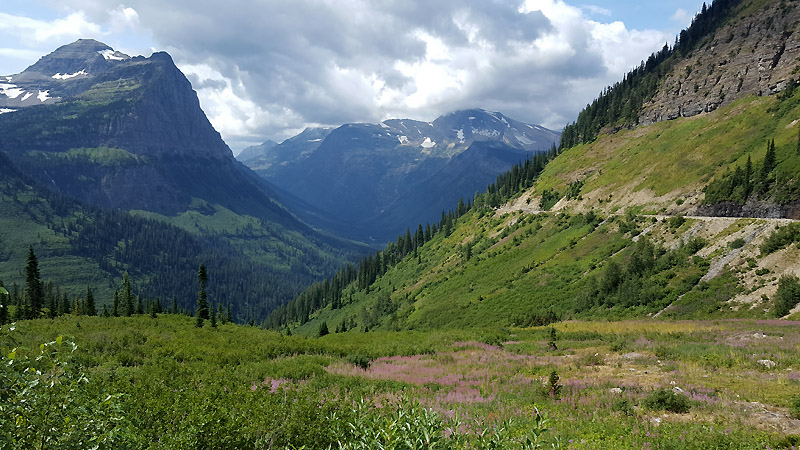 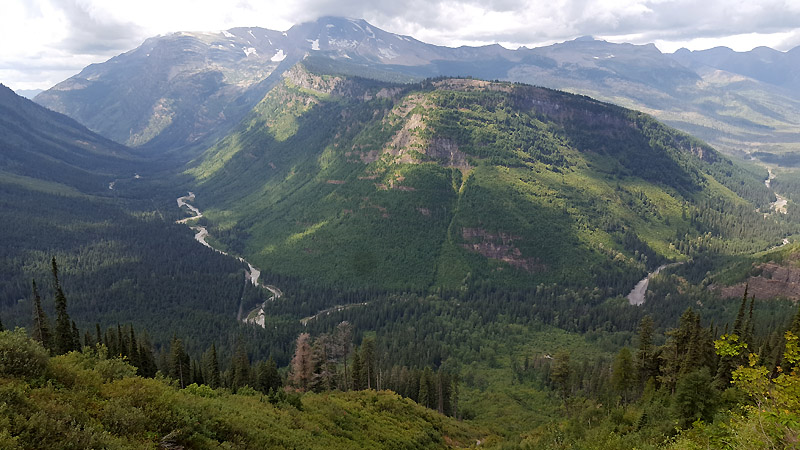 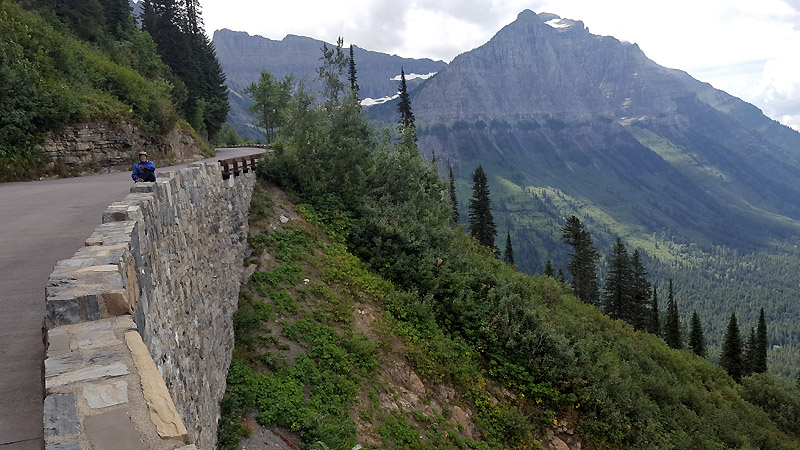 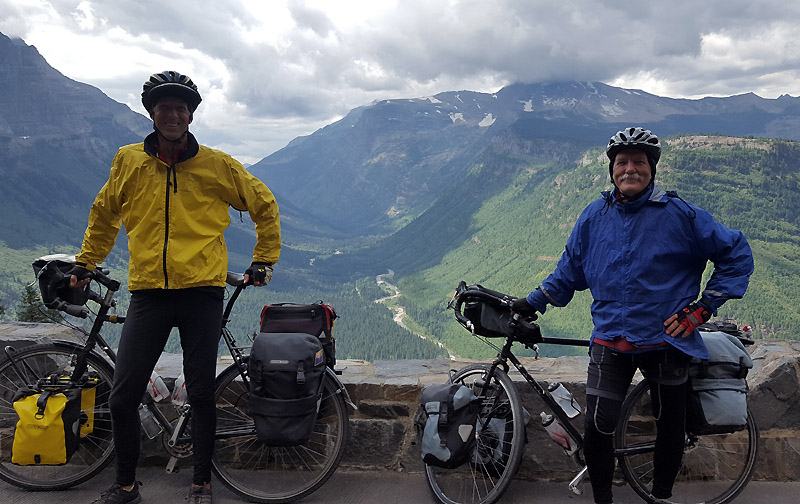 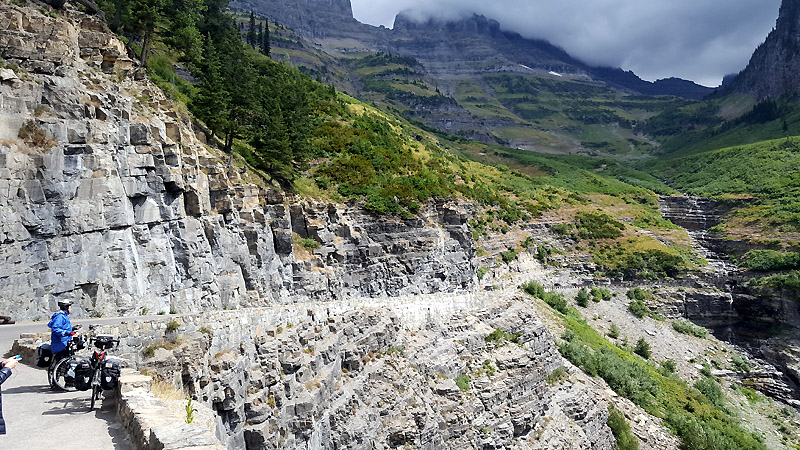 Around the 30 mile mark, the skies decide to open up so we pull over to a rest station to wait out a short downpour. When it quits we get back out there quickly, although I’m glad for my fenders.

The 38 mile mark brings Lake McDonald Lodge.  Phil is camped out at the camp store. He’d decided to enjoy the rip down the mountain and not stop too much, so he’s been here a while. Chocolate milk and Fritos for me, and the three of us sit in the sunshine of the store’s porch.

It’s 2:40pm, and the park rules prohibit cyclists from going between here and Apgar Campground until 4pm. The road is narrow, and on busy days I guess they just don’t want too many logjams. So we’ll wait until 4. Besides, it’s fun to talk to people, take photos for them, and explore around the grounds.

We’re out exactly at 4PM. A one-way construction site bunches up all the traffic, which is really great for us. Once through, we had long stretches of road to ourselves. It’s really a gorgeous spin along the shore of Lake McDonald, although Jack would later call it anti-climactic after the pass.

Except…Jack finally saw one! A bear that is. It’s a black bear lounging on the other side of a creek, and only 1 car plus the 2 of us are witnesses. Jack snaps photos, and within 5 minutes there is a throng of tourists and 20 or 30 cars around us, oohing and ahhing.

At the south end of Lake McDonald is the Apgar Campground. We learn, for future reference, that they too have hiker/biker campsites, which might have been convenient for today. For better or worse, we have paid reservations a little past West Glacier, so that is our destination for tonight.

In West Glacier, we hit up the West Glacier Restaurant. It’s nostalgic for Jack and me – we remember dining here one morning back in 2011 during our cross country tour. In fact, I think it was blueberry pancakes, and Jesse was with us. Jack had earlier had a quinoa omelette in camp. Funny the little things one remembers. This time around it’s a chicken Caesar and a glass of Riesling. Quite good actually.

Down route 2. Almost immediately we find a bike lane, and we’re pleased to see it continues most of the way to camp. We’re taking some mental notes as we ride. For tomorrow, the ACA map cautions that further down route 2 the passage is dangerous for bikes. There is a turnoff (Blankenship Road) that we’ve ridden before (back in 2011) that skirts around it. If we decide to take the turnoff tomorrow, we will have to backtrack and find it.

Sundance Campground. We’re here from a last minute reference from the West Glacier KOA, who couldn’t take us. It’s a pretty typical campground filled with RV sites. The manager sends us to one but we find it too slanted and bumpy for tents, and go back to ask for something else. Eventually we’re given a better one, flatter.

Adjacent campers have already taken our picnic table and doubled it up with theirs. They offer to give it back but we decline – let them eat. It’s sort of interesting because they’re a family where all the males are wearing yarmulkes – don’t think I’ve ever seen campers do that. Janel would have called them a “Little Fur Family” (see the book by Margaret Wise Brown).

Jack and I find an empty picnic table at a different site for conversation and I end up taking notes there in the dwindling light for a while. Jack notices that there are no bear boxes at this campground – for the first time on this tour.

My late snack dinner is Pop Tarts, Fritos, and a Mars bar – mmm. All the while, the little fur family is grilling steaks.

It’s been another utterly fantastic day on tour, one of the best.  I’m not sure it can get any better.  I will say it again:  The memory of cycling over Logan Pass will be with us forever.