On July 2nd, while pruning a branch, I broke a bone in a ring finger. Nothing spectacular, I just never seated the tool handle properly in my palm. Fortunately my left hand. Very fortunately I was able to remove my wedding band before the thing ballooned.

In medical-speak, the x-rays showed a multi-plane spiral fracture of the proximal phalanx. Lovely.

After a week in a splint, I finally saw a hand orthopedic doc. He confirmed what I already knew: the finger was both angled and rotated, something like 5 or 8 degrees. We decided to realign it and then secure it using pins. Even involved general anesthesia because the break was in a place he could not use novocaine.

So…I’m now in a bigger splint. Supposed to take 6-8 weeks to heal, and I figure therapy will happened after that. What’s most pertinent to cycling is that I cannot get this thing wet (the protruding pins are an infection risk). Is there any possible way to cycle and not have your hands sweat? In Arizona in July?

So I’m sidelined until at least late August. Not only for cycling, but I can’t play golf, exercise, play the piano, do landscaping, wash dishes, etc. My fitness level plummets. Even typing this with one-and-a-quarter hands is a pain-in-the-ass (I keep hitting the damned capS LOCK BUTTON WITH THIS HUGE SPLINT). 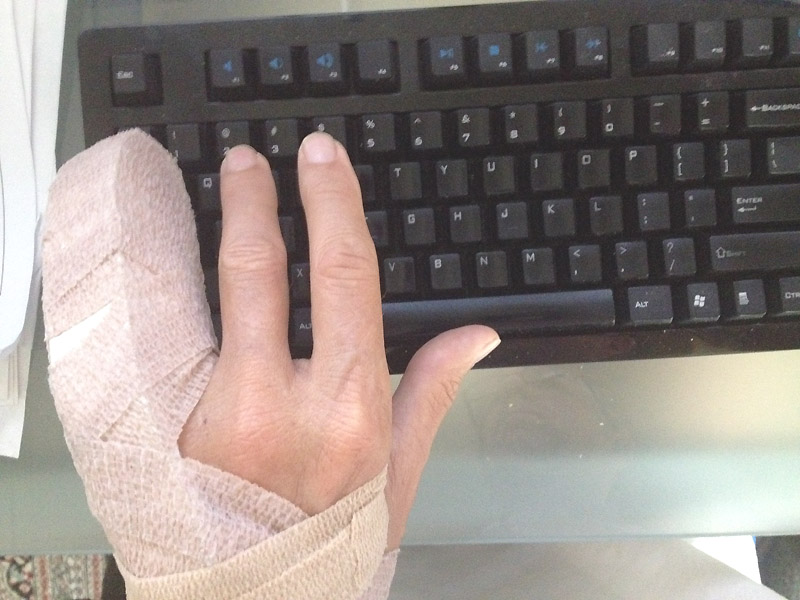 Jack and I have cancelled plans for an August tour – we had been discussing doing seven or eight hundred miles in the northern Rockies. Instead we might be able to sneak in a tour later this fall – we’ll see.