Phil was again up before me, no surprise.  This Holiday Inn had a much more decent continental breakfast.  I sat with Jan and Annette at first, and when they finished I joined into a nice conversation with Geni.

Randy was scheduled to drive the RV for the first segment, and so he stationed himself in the parking lot collecting riders’ bags.   Sally, Phil, me, Darlene, Tom, and one other rider (guy with grey curly hair) rode though Florence, and stopped at the Blue Mist to see what was happening.   Tom decided to wait for Paul, and suggested we take off since we’d ride at different paces anyway.

We set off north on AZ87, then took a brisk wind assisted segment west on Hunt Highway.  The guy with curly grey hair sort of rode with our group, but I could tell he didn’t want to join into the rotation, and instead stayed sometimes a distance ahead and sometimes behind.  We turned north onto Felix and enjoyed the excellent shoulder up to Arizona Farms Rd.

It was my turn to drive the RV, so I stayed at the intersection talking with Jane while Randy joined the group and they rolled off.   The dog owned by the RV owners (Maggie and Bob) was a gem, a very pretty and well-behaved pet.  Waves of J&P riders came through, Steve and Jan, Mike and Nancy and pooches, Tom and Alex, et al.

Phil was scheduled to drive the RV next, and I estimated that it’d take about 50 minutes for them to reach the rendezvous (at Combs and Gantzel), and about 15 minutes for us to drive it.   When our 35 minute wait was up, Jane was just seeing Paul and Tom come into view, so we decided to wait for them too, and they were pleased that we had.  But I was a little concerned that Phil would be waiting by the roadside for us.

During our wait, and the subsequent drive, I really enjoyed talking with Jane about past rides and generally getting to know her better.  She was not riding this year due to a collar bone fracture she’d recently suffered.  I could tell she really wished to be out riding this year, though, especially with this fabulous weather.

Phil thoughtfully called and gave instructions on where best to park the RV.   When we arrived, I was surprised to find the whole group waiting.  Just after we pulled up, Mary Ellen appeared and joined the group, riding into the head winds from the west.  Everyone was raring to go, so I soon saddled up and turned over the keys to Phil.  Phil laughed that I’d neglected to retract the step up into the RV, and we both looked to make sure I hadn’t taking out any cyclists with it.

Our route took us on a continued stairstep northwest.  The segment I’d missed followed many of the Casa Grande Century roads, but this segment traversed new roads for me.  The winds continued steadily from the east, and on Ocotillo Rd., Darlene suddenly took off again doing 26 mph or so.  I pounced on the pedals as well to catch up with her, soon past.  In a few minutes, I thought I was far ahead, but I saw that Darlene was keeping with me stroke for stroke.   I was looking for the cued turn north onto 108th Street, and I at first saw 215th Street and then 203rd Street.  Something didn’t feel right about how far west we were going, but we were flying with the wind and kept going.

Randy and team finally called out that we’d missed our turn, and I came to realize that the cue sheet’s naming of “108th Street” was actually Signal Butte Road.  As a detour, we took Rittenhouse Road, which took us quickly to the intersection of Queen Creek and Ellsworth, and back on track.  With a grin, Randy admonished Darlene and me for breaking away and missing the turn.

It was a pretty roll up through the old Williams AFB.  We all knew lunch was soon ahead and the day couldn’t have been prettier.   I found myself really appreciating how a tour like this helps you focus in on the little things and helps you throw all your other cares out the window.

Mary Ellen, Darlene, and Jan took off in here somewhere, heading due west back home.  The remainder of the group found the shopping center on the northwest corner of Ray and Power, and then found a couple candidate restaurants for lunch.  Seeking out more options, I took a roll around the parking lot, and lo and behold found the new Pat’s Cyclery, recently moved here from downtown Mesa.   I parked and went in, talked for a while with the young mechanic, and finally located Ken Patterson.  Ken gave me a full tour of the new place, which promises to be a big improvement over their old spot.  Better facility, nice area out back for test runs, and certainly better foot traffic and walk-in business.  The place was looking great.

By the time I returned to the restaurant, the group had chosen Rubio’s and was mid-way through their food.  I ordered a fish taco and sides, then took the opportunity to take a few group pictures.  Steve was kind enough to take one of our “team” with me in it.

We soon were ready to roll out again, but I stopped back into Rubio’s and thanked Tom, Jane, and Paul for another very successful J&P Tour.  Sally, Randy, Phil, me, and that guy with the curly grey hair took off west on Ray to Lindsay, then turned north.  The cross-breezes were gaining strength, and we paced our way north at a decent clip.

We waved goodbye to Sally as she peeled off at Guadalupe Road, and I eventually peeled off at Adobe Road, continuing north on Lindsay.  I think Phil and Randy stayed with Mr. Curly for the ride back up to Scottsdale and Jane and Paul’s house.   I stayed up Lindsay to McDowell, then did a slow chug back into the wind, and home.  Geared down and enjoyed every minute of it – the final leg to a tour that was, quite simply, glorious. 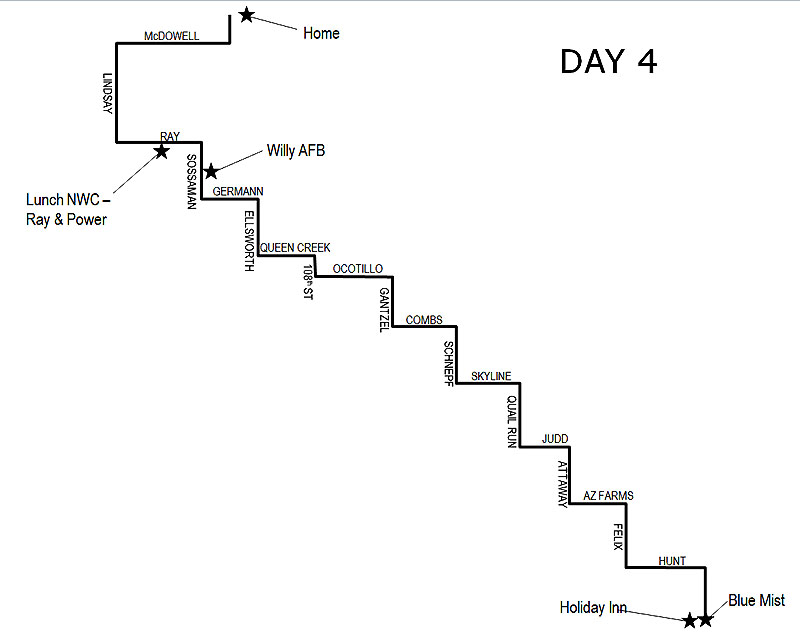 Post Ride:  A few packing notes, for next year…  I’ve got this pretty well down so far.  Leaving off the street shoes would be fine, but it is nice to have them for those walks to restaurants.  Maybe find a lighter pair.  Also, repack the bike so that it is more even front-to-back.

Not-to-scale maps that accentuated the turn information, included in this journal, were very nice to have (even though I missed that one turn on day 4).  I’ll plan to do this again next year and possibly offer them to Tom for the website prior to the ride.

Very happy with my riding this year.  I made it the entire distance with my loaded panniers, which I couldn’t do last time.  And my knees feel just fine – last year they were twinging for at least a couple of days.

The entire J&P group this year was great – the camaraderie was excellent.   Tom Adams did another stellar job of organizing things just enough, without being anyone’s Mom.