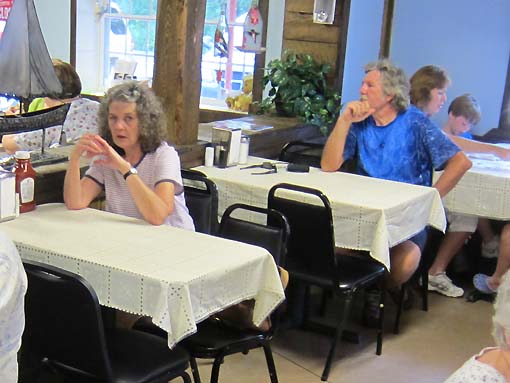 Breakfast was included with the room at the Holiday Inn, so Phil was up by 6:15am.  A nice looking buffet table turned out to be meagerly supplied, and the breakfast area was quite understaffed.   The eggs and pancakes were passable, the bacon not so.  Other riders slowly drifted in and scrounged up their morning fare as well.

Just about ready to go, Phil stowed his bags in the RV.  We generally congregated for a while out front, just socializing and seeing what other riders were doing.  Pretty soon there were 7 or 8 cyclists all ready to go at the same time – it looked like a starting line.  I noticed that Harry at least was wearing his jersey this morning.

Steve led the charge and soon we headed south again on Pinal Avenue.  I started about a minute late, got caught by a light, and soon was struggling to keep sight of how the group was snaking its way through southern Casa Grande.

We all soon eventually made it out onto Jimmie Kerr Boulevard.  Heading southeast, we were aimed directly into the rising sun.  It was around 50F, and there was a nice white morning haze that made the horizon glow – a great morning to be riding.

Our first brief stop happened about 8 miles in at the Circle K at Jimmie Kerr and Eleven Mile Corner Road.  Jan, Steve, Sally, Alex, and others milled around the front of the store for a few minutes, while other riders, including Phil, simply paused out in the road shoulder, then resumed riding.  Harry stopped for a minute and took off his jersey.

I lost Phil here and didn’t see him again until Picacho.  Randy, Mary Ellen, Sally, and I linked up and continued southeast into Eloy.  We made an exaggerated and humorous fuss over the I-10 overpass, it being the biggest hill we were likely to face that day.   Then through so-called Dog City, known for free-ranging dogs, although we didn’t see any.

Our group continued on a very nice pace all the way to the Pichaco Dairy Queen as an off-and-on four-, five-, or six-some, including Randy, Darlene, Sally, Mary Ellen, Geni, and me.  Another perceptible tail-breeze was helping us and the weather was simply gorgeous, ranging in the high-50s to mid-60s.

Somewhere in this stretch, I started to bonk slightly, having eaten nothing further at the Circle K.  I started to slow, and asked Randy how close we were to the DQ.  He decided, “About a mile and a half.”   Only a mile and half!  So I quickly picked it up again, but just as quickly decided that Picacho Peak looked considerably further away than that.  I stopped and unpacked a Granola bar, telling the group to go on.

It took quite a few minutes, but I finally caught up with Geni and then the rest of the group again.  The granola bars certainly renewed my energy in a hurry.   The DQ turned out to be about 8 more miles, so Randy’s “mile-and-a-half” estimate quickly became a running joke.  While we rode, I started an internal, then external, chant of “Cheeseburgers or ice cream, cheeseburgers or ice cream?…”  Randy suggested perhaps both.

Sally mentioned that she is a fast downhill rider, and I brought up the concept of “ballistic coefficient,” and we jokingly discussed the factors involved.  We couldn’t decide whether it was better (faster) to have a large coefficient or a small one.

Finally at the DQ, we met up with Julie, Phil, Ron, and many other riders.  I had a big cheeseburger plus onion rings, with plenty of support from the drink fountain.   We’d so far ridden about 30 miles, and once off the bikes, everyone became very talkative and energetic.  We enjoyed a long stop there joking and sharing stories.

Most of the riders took off while Mary Ellen and I hung back.  Mary Ellen was organizing sag drivers for the coming two days, and was waiting on some communication from Maggie, the RV owner.   But we eventually rolled out down the frontage road with the temperatures now in the high 60s, the sun shining, and that nice little tail breeze helping us along.

We picked up again with Randy, Sally, et al, and were soon at the next traditional rest stop in Marana at the Chevron station.  A group of shiny Harleys had just passed us, and we encountered them all leaning on their bikes in the parking lot.  I’m sure they were observing us with scorn clad in our lycra, until Randy started talking with them, and they turned out to be pretty nice guys.

Funny, I always look at the appearance of Harley guys (in their leathers and chains) as such a cliché, but then, as a group of lycra-clad cyclists, I’m sure they think the same thing of us, or probably worse.

Continuing southeast, we encountered a slight detour at Tangerine Road.  Further on, the frontage road actually closed and we detoured heading due west for 2 miles on Avra Valley Road, squarely into the head breezes.  South on Airline, turning into Lambert Road, we encountered 2 coyotes who apparently wanted to cross the road but were spooked by our strange machines.   They didn’t run off, however, but rather backed away from the roadside and lay down in the desert waiting for us to pass.

Lambert snakes its way up a small hill and I enjoyed the brief climb, using a different set of muscles.   Darlene had been looking for a photo-op saguaro, one with arms, to send to her friends back east, and along this stretch we found a good one and stopped for a while.

About 8 more miles south on Silverbell Road, and I was definitely reminded of the agony of the last stages of the El Tour de Tucson ride back in 2008.   Then east on Ina Road, squeezing by traffic at the I-10 underpass, and on to a Circle K for refreshments.  Randy and I picked out a six pack of Fat Tire while Darlene scored a six pack of Coronitas.

The Motel 6 was checking in riders, but as usual many of the rooms weren’t ready yet.  Instead of standing in line at the desk, I opted to lounge out in the sun.  I managed to crack open one of the beers on the corner of a concrete bench, and soon both Darlene and Randy joined me.  This small circular garden in the middle of the Motel 6 parking lot became our own beer garden oasis.

Phil and Sally arrived rejoicing in their tasty visit to Emge’s for a lemon slushy frozen treat, only a few miles up the road.   Many other riders continued to roll in as well.

Following our showers, I met Mary Ellen and Jan in the lobby.  Julie was organizing a dinner party at Miss Saigon next door, while Mary Ellen and Jan wanted to head to La Parilla Suiza down the road.  I was torn – the Vietnamese food sounds pretty good.  We decided that it was a case of a Vietnamese-Mexican standoff.

Mexican it is, and M-E, Jan, Ron and I enjoyed the ½ mile walk east on Ina to the restaurant.  We ordered some tasty and large Cadillac margaritas.  My order of parillada de pollo was particularly huge, I’m sure it was supposed to feed three or four people.  Fairly tasty, with chicken, onions, green peppers, etc. not unlike fajitas, but more chopped up, served with tortillas.

The walk back in the evening air was great and my legs felt good after the day’s again relatively easy ride.  At the room, I saw that Phil was still out, but very soon my cell phone rang.  It was Mary Ellen suggesting that we join Darlene at the Miss Saigon bar for drinks.  Like I really needed another drink.

We crossed the parking lot to find Phil and Darlene talking at the bar.  I ordered a glass of gin on the rocks, and I could hardly believe the huge serving.  Likewise, Mary Ellen’s glass of wine was a goblet about 2/3 full.  The conversation soon got pretty hilarious, with Mary Ellen making no bones about loudly proclaiming NBA star Kobe Bryant a “fucking rapist.”   Darlene, and later Mary Ellen, ordered a Grand Marnier and Phil a Corvoisier, and both were served in brandy snifters more than half full!  I spread my single glass of gin into 4 separate drinks, adding plenty of ice with each portion.  This was a very generous bartender.

Darlene, a meteorologist, was very interested in the Iridium project, particularly as an astronomy enthusiast and frequent “Iridium flare” observer.  This gave Phil, Darlene and me plenty to talk about.  Darlene then gave us a fascinating description and accounting about her battle with a fortunately operable brain tumor, complete with great pictures of pre- and post-op she kept on her smart phone.

Tom, Randy, and Sally soon joined us, finishing up their dinner inside.  Tom talked to me at length about Thailand, having made many visits there and marrying a Thai woman.   We talked about the sights, the security, shopping, cycling, etc.  I really appreciated his tips and insights for our upcoming trip.

Sally made me laugh when she recounted the fact that she “had ballistic coefficient.”  I immediately liked the notion of “having coefficient.”  We especially laughed at the observation that she benefited from a small A. 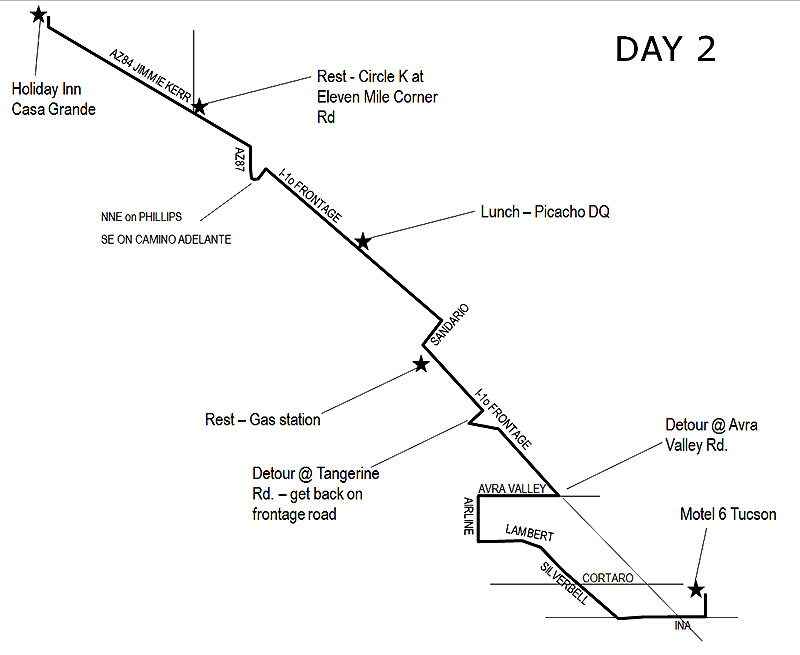