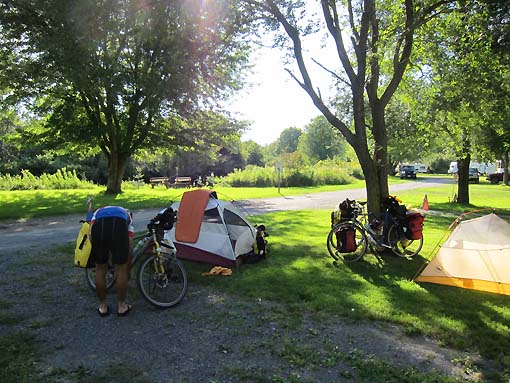 Took off about 9:15am in order to meet the tour group at the Starbucks at Dobson and Warner Rds. by 10:45am. The bike handled quite well. I could feel the extra weight, especially in terms of slow starts, but not as bad as last year.

I left the house no less than 3 times, each time remembering something else, like bringing the garage door opener with me, or taking a daily vitamin. Heading south down Lindsay Rd., I was increasingly bothered by a nice creak every time I pushed on the right pedal. I must have missed that with the spray lube. A Checker Auto Parts store came into view at Lindsay and Main, so I wheeled over, parked, and went in. I quickly found what I was looking for, a small can of WD-40, and proceeded to the checkout line. There in front of me was a tough-looking girl sporting a puffy black satin jacket that proclaimed the name of some race car training school. When she noticed the click of my bike shoes on the floor, she slowly turned and swiveled her gaze, right at my crotch clad only in bike shorts and leg tights! I almost started laughing, but decided not to make any scene with this burly chick.

As I approached Dobson Road, I finally took a look at my watch and saw it was 10:35am. Two miles to go, perfect timing. I soon spied a recumbent ahead, complete with panniers and a safety flag, and I quickly gained on it. I recognized Paul right away, and jokingly asked him if he was headed to Casa Grande.

He hadn’t seen me in a year, and didn’t recognize me right away, but when he saw my panniers he concluded that I was with his group. He asked if I was meeting the group ahead and I nodded yes. I asked if we were ahead of or behind the group, and he said behind. Resuming my cadence, I continued on past.

At Warner, I spied the group of mostly yellow-clad cyclists west in the parking lot, and rolled over. They had mostly ridden from Jane and Paul’s house in Scottsdale, the traditional starting point for the ride. Tom Adams greeted me immediately, and I soon saw many other familiar faces from last year: Steve, Alex, Dennis, Jane, Sharon, Geni, Mike and Nancy (with 2 dogs this year, Zack and So-so)… And Phil! Plus some new J&P riders, including Randy (already a friend from PMBC) and Sally.

We waited for quite a while before I realized they were waiting for Paul. I told them he should have been a mere ¼ mile behind me. We finally surmised that Paul had simply skipped this stop and was probably on his way to the lunch stop.

The group headed south on Dobson. By tradition, the group rides together up to lunch time on Day 1, usually a nice comfortable 11-13 mph. My sub-group missed the turn at Ocotillo until Steve caught it, and we retraced back to the intersection.

We soon reached the McDonald’s at Alma School and Chandler Heights, and were joined by quite a few other riders: Steve’s Jan, Mary Ellen, PMBC’s Jan, Darlene, and a mystery guy without a shirt, among others. I grabbed 2 cheeseburgers, fries, and an orange drink, and sat inside with Phil, Randy, and Sally, and we immediately all hit it off as a good group.

The day’s weather was fabulous and I pulled off my arm warmers. I learned that the guy without a shirt was named Harry. Soon enough we rolled out and headed south down AZ87. After lunch, everyone usually follows their own riding speed, and we formed a paceline with Phil, Sally, Randy, Mike, Nancy, and me. A nice tail-breeze was helping us. We tried to stick to a steady 15 mph, but Mike, despite being a super strong rider, was pulling some 40+ lb extra weight with the dog trailer, and couldn’t quite keep up this pace. And Sally clearly wanted to move faster, as she tended to edge up over 17 mph whenever she was pulling.

The group stopped at AZ187, and our paceline dispersed as riders took off separately up the small hill there. Randy and I soon paired up and worked at a nice cadence on the climb. This road has no bike shoulder but is a most beautiful desert mountain area. I finally pulled over on the downside when I saw Jan there, just to socialize.

Randy and I continued down across the I-10 overpass, and eventually teamed up with Mary Ellen and Darlene. Mary Ellen and I hadn’t talked too much in a while, and we made up for it by gabbing all the way into Casa Grande. When we passed by a rodeo and carnival being set up, we veered off to see if we could get in for an amusement ride, but unfortunately they weren’t open yet.

Down Pinal Ave. and into the Holiday Inn parking lot. Today’s ride had certainly been easy with the assist of the tail breezes and pacelines. I was happy to have made it with my loaded panniers and to be free of any knee twinging, unlike last year.

The Holiday Inn was packed and turning away guests who didn’t have reservations. Randy was forced to go down a busy Florence Blvd. to the Best Western. The Holiday Inn also screwed up most of our group reservations, giving Phil and me (and other double parked riders) a single king bed. They placed a roll away cot in there at no charge, however. No big deal.

Phil took a shower, and then, as I showered, he scored a big can of Tecate. Around 5pm, we all went in the lobby to meet up, including Randy. We were soon in the hotel bar, with Mary Ellen, Sally, and Jan working on White Russians, and Phil with a Guinness. I asked the bartender for vanilla vodka on the rocks, and he filled up a regular 8 oz. bar glass to the brim.

As I sipped on it, a felt two hands slip over my shoulders and commence into a massage. Not even bothering to find out who it was, I simply leaned back and started quietly moaning my pleasure. It turned out to be Julie, a veteran rider of this tour but a new and interesting acquaintance for me.

We exited and walked south across the street to Barney’s Steak Seafood and Salad place. I started with an acceptable salad bar offering with bacon bits and Thousand Island dressing. They then brought out a thoroughly forgettable sirloin steak, tough and overdone. I really enjoyed our table of Mary Ellen, Jan, Randy, Phil, Sally, and especially talking with Julie, Ron and Darlene.

Back in our room, I tried watching some of the opening ceremonies of the Olympic Winter Games, but my eyelids closed somewhere around Moldova. The king bed was plenty big for the both of us, so we never even opened the cot. 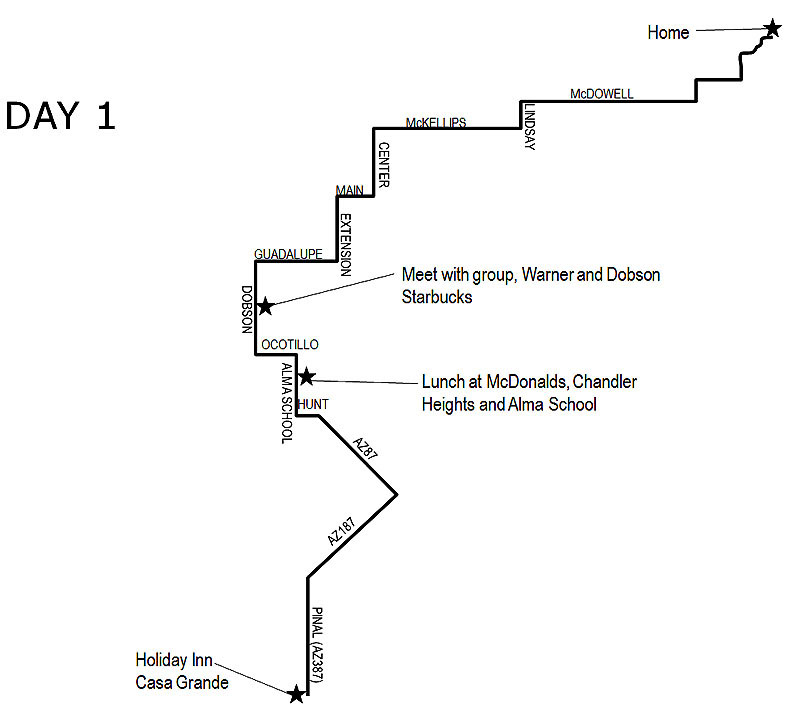