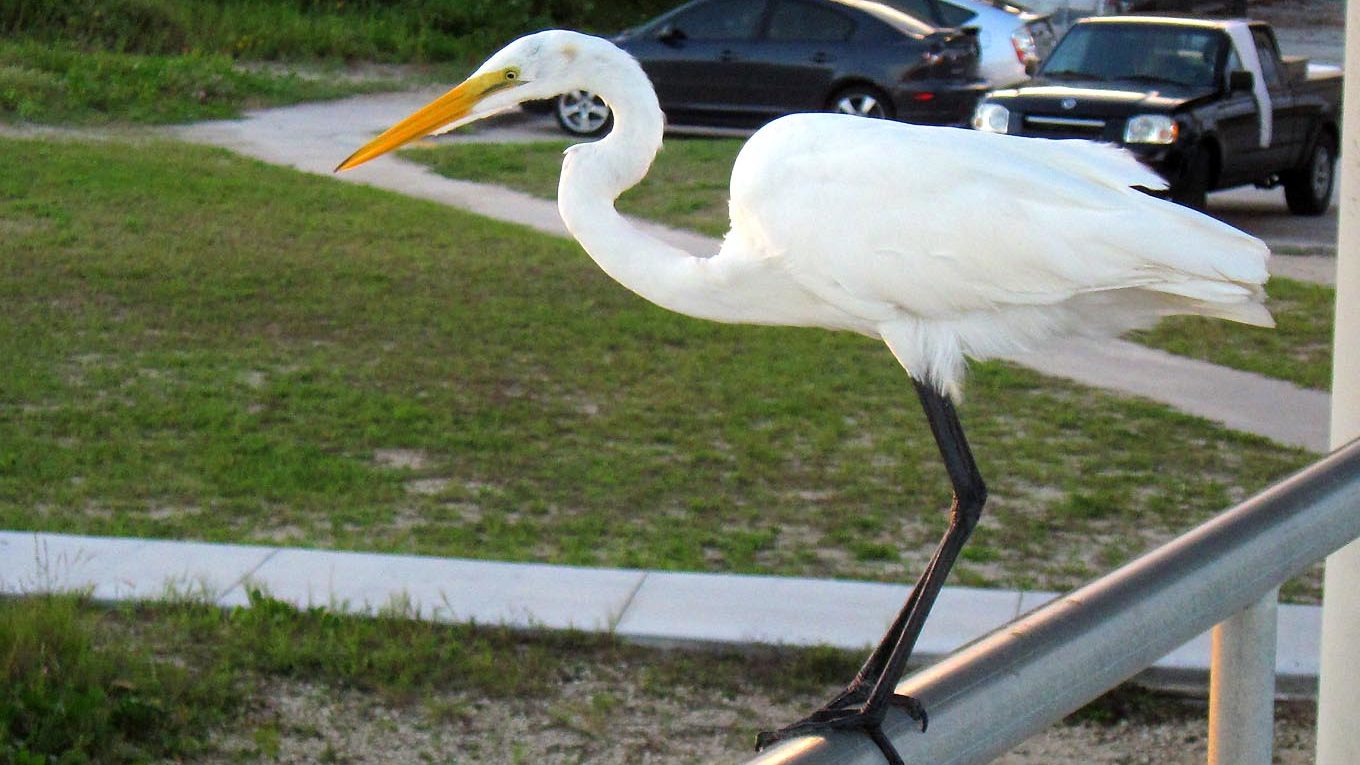 A nice night.  A few patches of rain, but the rest of the night we got a gorgeous hazy moon with big clouds around it high in the sky.

I stirred a little earlier than I wanted to.  Once around midnight, then 1, then 2…  I kept getting little tickles on my legs and torso: biters?  The first time I felt it I went for the “Skin So Soft” liquid, which anecdotally keeps the beach bugs away.  Was I getting bit?  Was that sorta snarky park ranger right?  At light, I saw that I’d only been bitten a few times, no big deal.  Still, I wondered if that had happened at the inlet last night, or worse, in my sleeping bag.  I wondered if I was rolling up little no-see-ums and carrying them with me this morning.

In any case, I decided first thing this morning that I would ride in a “full knee protect” mode today.  About 5AM I took 2 Motrins, then took another 2 at 8AM.  That’s a bit much but dammit this is a vacation for me!

Sebastian Inlet was lovely in the morning.  We rolled only a few hundred feet from our campsite and just had to stop.  Jack and I walked out onto a foot bridge beneath the causeway.  A tremendous inrush of water was taking place – an amazing volume swirling wildly around the bridge pilings.  Anglers, both human and avian (herons and egrets etc.), were out in full force.

From the get-go I spun very lightly on the pedals, and every 20 minutes stopped to recheck the seat position.  I even experimented with the pedal stroke itself, trying to roll the foot a little less, with less of a toe pointing.  Got to work out these knee problems, if possible…

For the first 16 miles they only whispered to me, a good start.  The only thing I can remember about the ride was the sighting of a decent sized bobcat on the bike path.  We reached Vero Beach and found a restaurant called The Lemon Tree for breakfast.   The place seemed to be a locals hangout, and judging from the accents, most all were transplants from the Northeast.  We enjoyed omelets again, which were much better this time around.

The barrier island runs out at Fort Pierce Inlet, which forced us up and over a bridge into the town of Fort Pierce itself.  The road soon recrosses the river back to the oceanside, currently all broken up and under construction.  We took a detour that eventually emerged onto the shore and found a little convenience store called Lipshutz and Dimaggios South Beach Market.  Both Jack and I had milkshakes on our minds, but a weird smell inside the place diverted that idea.  I opted for a carton of chocolate milk instead.  Our pause out front turned into about 30 lazy minutes of sitting at an umbrella’d picnic table.

The next 20 miles were one long sweet taste of Hutchinson Island, much of it a national wildlife refuge.  We passed some private residences on both the Ft. Pierce and Jensen Beach ends, but mostly this stretch is beautiful and isolated.  The island becomes very narrow in numerous places.  By standing up on the pedals you can easily see both the ocean and inland waterway over the mangroves.

About halfway there we rolled by the Florida Power & Light Nuclear power plant.  I liked seeing the two big cooling towers, and to see how the ocean water is routed to and from them.  Only a half mile past the plant, I nearly ran over a land crab who was trying to cross the street, and almost simultaneously spied two raccoons near some pines trees.  Got 500′ past before deciding to go back and take some photos.  The raccoons didn’t care for the attention much but the crab was just fine with it.

By the time we neared Jensen Beach, the winds had picked up quite a bit.  Oceanside condo towers blocked the easterly winds, and they created quite a pronounced effect on a bike.  First you’d get a nice lull as you got leeward, and then a big headwind rush just past each building’s edge.

The plan for the next 2 nights is to meet up with Linda and stay here in Jensen Beach.  We found our place, a highrise called Vistano’s Beach Club, and checked in at the desk.  While I loved the last 2 nights of camping, I admit it felt pretty good to get some air-conditioning, a shower, cable TV, and wifi.  Both vegging and napping were quickly involved too.

In about 2 hours Linda showed up.  Great to see her!  We spent the rest of the afternoon doing laundry and telling story, and finally selected a beachside place called Shuckers for dinner.

Very good place Shuckers.  Too touristy, but right on the beach, and they make good drinks.  My margarita was superb, while Jack enjoyed a mai tai, Linda wine.  We sat and enjoyed grouper and pasta dishes along with oceanside breezes, recounting our last few days of riding.  All the while, a harvest moon rose over the water – quite a beautiful sight.