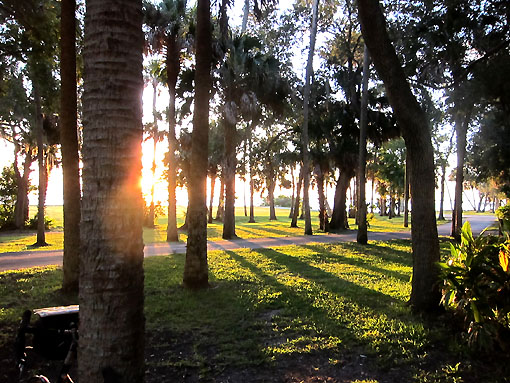 Jack and I didn’t pick ideal tent sites yesterday, because a big mercury vapor light kept one side of our tents illuminated most of the night.  What WAS cool was the view of a huge light pointed skyward way out across the Indian River, which we later learned was the site of an Atlas V rocket in final assembly at Cape Canaveral, to be launched tomorrow.

We planned an early start.  Jack adhered to this plan while I only reluctantly did.  Still, we hit the road by 7AM to some nice riding temperatures.  Just like my “knee experiences” on the RA tour, I got about 6 or 7 good miles out of the right knee, and then it started complaining again <groan>.

Like yesterday, I began to carefully monitor my seat position, and at the same time started in on some ibuprofens.  We did some beautiful riding on Indian River Drive following the river’s edge.  I’m quite sure that Jack was loving it, because I would have too, except that I could only sadly puff along about 8 mph, barely pressing on the knee, and wincing with every rotation.   Fortunately, the same tailwinds we’d gotten yesterday were helping a little.

In Cocoa we searched downtown for a good cafe, but ended up settling for one that was a bit lame, with ho-hum omelets for both of us.  The best part of the place were two elderly gossipy ladies carrying on behind us.  Eavesdropping on them was fun, a non-stop banter of ailments, who’s died, who has said what, what Medicare pays for, etc. all in profound Southern accent.

After breakfast, we took to more riverside riding by some really great home properties.  Instead of steering us back onto US1, the route then steered us inland onto a variety of neighborhood streets.  Soon we were making seemingly strange turns west and east and even north, trying to follow the map.  I say “we” but the reality is that my ultra slow speed was such that Jack hardly saw me, and then only at regroup points created by him.

Alas, throughout this segment, the knees started singing even louder than before, despite the NSAIDs and all my other efforts.  I could not help but entertain thoughts of ditching the tour – each new pedal stroke was no fun.  Of course, I started compensating by doing stupid things like favoring my left leg, and leaning heavy on the handlebars (to take pressure off the knee).  The immediate results were entirely predictable – the beginning of left knee pain, and the emergence of numbness and nerve pain in the wrists and hands.  Geez, I know better.

We finally got off Wickham Road, Parkway Road, onto more very nice riverside riding, and finally over the Eau Galle Blvd. bridge to the barrier island.  Jack figured the uphill climb would really tax my poor knees but somehow climbing uses a different mechanic and posture and didn’t bother me.  I even hit over 20 mph on the way down – wow, didn’t think I’d get that fast all day.

In Indialantic we found Sundaes on the Beach, an ice cream shop, and stopped for vanilla milkshakes.  Let the debate renew.  They made ’em on the icy side with a nice balanced vanilla, just like I like ’em.  You may recall that Jack prefers his shakes creamy.  When I asked for a spoon instead of a straw, it was almost all Jack could tolerate.

Next stop: a grocery store for camp provisions.  I spent a long time searching around and finally settled on some gourmet pretzels and chips.  Before leaving town, we also stopped at a bike shop, Bob’s Beach Bicycle Works.  I thought maybe the mechanic could degrease the seat post, and also look to see if the post clamp needed replacement (due to the heavy torquing and too much use).  He focused on replacing the clamp, but then couldn’t locate one in his stash.  He torqued down my existing clamp more than I would have, in hopes that it will hold.

I think the ibuprofens finally started to work (5 so far today) because by mid afternoon the knee was working somewhat better.  Maybe the seat position was finally fixed and that helped.  Or maybe I’d just beaten my knees into submission.  We headed south on A1A for another 18 miles, helped out by those mild tailwind, and I started enjoying it all.  Jack and I looked intently for a possible dinner place but repeatedly struck out, and finally settled on a stop at Publix supermarket for more camp provisions.  We picked up some bread, cheese, ham, drinks, etc., then continued on our way south.

About 6 miles from camp, I figured maybe icing my knee would be a good idea tonight, and so pulled in to a bait shop (Jack was well ahead of me already).  I explained my desire to ice a bum knee in camp tonight, and the friendly guy in there gave me half a bag for free.  The conversation went something like this.  “Where’ya camping?”  “Sebastian Inlet.” “Gonna get wet.”  “Yep.”

He knew what he was talking about.  South of the bait shop the skies looked very ominous.  As I rode, the winds suddenly changed into cooler headwinds, and I knew I(we) were in for it.  Jack later told me that a pick-up truck actually had stopped for him and asked if he wanted a ride.  “There is serious rain ahead of you.”  Jack told him, Nah, I like to ride my bike!

I stopped to put on my seat and trunk covers, and packed my cyclometer and sunglasses into my handlebar bag.  I decided to forego the raingear and instead plow forward in just my cycling clothes.  They were pretty wet anyway, and the temperatures were still in the 70s.  The rains started moderately, but within a quarter mile they became quite heavy.  And, yes, as you might have already guessed, I found it all to be pretty much fun. There is something defiant and even mischievous about slashing through such weather, thinking about exactly where you are and how you are enjoying it in an odd way.

Jack and I both took to the paved bike lane separated from the road shoulder, figuring that drivers’ visibility was diminished.  Numerous land crabs and iguanas would scurry off the path, adding to the fun.  Four miles through this wind-driven rain brought us to the Sebastian Inlet bridge.  Up over the bridge the gusts got very squirrel-y. This was the only unnerving part of the storm and I was glad to get off the other side.   Up on the bridge it felt like being inside a dishwasher, blinded by the rains and being rapidly buffeted in unpredictable ways.

The ranger at the park office gave us a few laughs.  He told Jack (in his raincoat) where the roofed structures were in order to get dry, while he looked at me (in soaked jersey) and said, “Well, it’s too late for you.” He presented us a set of campsite options to explore, but also warned us, “You know, those tiny tents never stay dry – you guys are going to get wet.” and “When the winds die down, the no-see-ums are going to eat you guys alive.”  Ah, thanks for the advice, ranger!

Our site was fine, located among some beautiful sea grape trees, but we did have to set up in the rain on top of an RV pad, never that fun.  We regrouped beneath the canopy of the washroom, and only then did I actually started getting cold in my still-wet cycling clothes.  I went back to my tent to change, and found the air inside nice and warm.  I sat on my air mattress and sleeping bag, surrounded by wet panniers and big puddles of water, looking around at the mess.  Man!  The light rains continued so I decided to just sit, get warm, organize, and use my Shamwow to do some tent housekeeping.  My reverie turned into a private ham sandwich dinner in the solitude of my tent (thanks to Jack who threw some bread in to me.)

After an hour the rains stopped and I emerged, finally in dry clothes.  Jack joined me and we finished dinner at the picnic table, although my “gourmet” pretzels turned out to be rancid <sigh>.  As we ate, a couple of “camp” doves with ringed necks loitered fearlessly close to us, but even they wouldn’t eat the pretzels.

At dusk we ventured out to the waterfront of the inlet.  The twilight skies were very beautiful, and we watched as coastal birds, mostly herons, flew in to the sea grape trees to roost for the evening.  Occasional mullet would jump, and sometimes an explosion of them would break the surface.  We wondered if that was a sign of predation or simply a cascade of one fish jumping then two more who get spooked and jump and so forth.

I was really beat, and I think Jack was too.  Today’s weather was the best yet, a little bit cooler and with slightly helping winds most of the day.   It was the knee battles that wore me out.  Like yesterday, the knees quieted down as soon as I dismounted, but the memory of today’s pain was, well, painful.  I sure hope it gets better tomorrow but frankly I have low expectations.