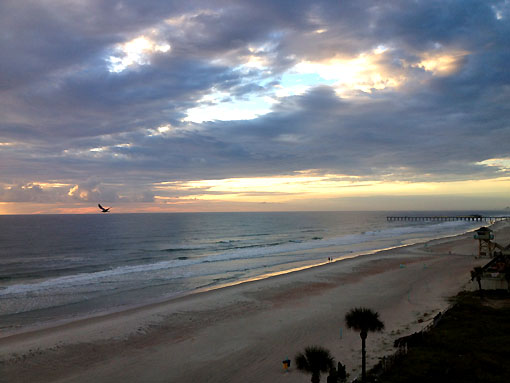 The hot riding so far is prompting us to get up a little earlier, so this morning we hit the road by 7:30AM.  We’re off the AC route again, and so improvised our way back across the bridge and into Port Orange in order to get back on track.

The quiet and beautiful river road eventually led back to US1 – ugh.  Lots of traffic there but at least the bike lane was pretty good.  There was a slight tailwind and I felt good, and so ended up cranking along at 14-15 mph.  The presence of traffic beside me always makes me push harder too – an adrenline thing maybe.

In New Smyrna Beach, we found Mom’s Home Cooking for breakfast.  Crossing the street, I pushed firmly on the pedals to clear traffic and felt a sudden pain rip through my right knee.  Man, what the heck?

Breakfast was so-so, eggs, ham, and 3 tough pancakes.  Jack’s Belgian waffle looked pretty serious with whipped cream on top.  In the parking lot we met a New Jersey lady who was celebrating her first day of retirement, and thought what we were doing was pretty cool.

The route stays inland for quite a while in order to skirt around the Cape Canaveral launch complex, and we stayed on US1 for a long slog.  Fortunately we were still getting a little bit of tailwind component from the ENE.  Unfortunately, my right knee started really howling at me.  I backed off to 11 mph while Jack took off, soon a speck in front of me.

My thoughts returned to my gear preparations in Arizona 3 weeks ago.  I had decided to remove my Brooks saddle and stem from my bike and store it inside the car, to prevent it from getting wet.  When I had removed it, the stem was covered in rust, so I had quickly cleaned it off and put a light coating of WD40 on it, thinking it would help prevent further rust.  Mistake!

Now, the seat post wouldn’t hold.  I stopped repeatedly to reposition the seat and re-torque it down.  I tried using paper towels to dry off the post and clamp as much as possible.  I torqued the bolt down hard, as much as I might dare without stripping or breaking it.  Alas, as cyclists know,  even a very minor change in seat position can wreak havoc on one’s knees.  Mine was constantly changing as I rode, slipping downward, and the knees were not happy.

I ended up finding a slightly lower position that felt more comfortable overall but the right knee still twinged with every pedal stroke.  <Big sigh>  Time to just back even further off, minimize the pressure, and keep trying things.

Jack had to regroup several times with me, and we finally stopped together at a convenience store in Oak Hill, which seemed like a real hillbilly sort of area.  From there we continued down long straight stretches of US1, and continued to get a little tailwind help thank goodness, through Scottsmoor, Mims, and Titusville.

In Titusville, we stopped downtown at a CVS so I could buy a new pair of reading glasses, then found a Subway for a long lunch.  Not really meaning to, Jack and I each downed a full footlong.  Let the big appetites roll – for me it’s one of the perks of bicycle touring.

Twelve more miles of US1 took us by a large but curious billboard advertising a “cosmetic gynecologist” (hunh?).  It also brought us to the tour’s first chance to tent-camp at Manatee Hammock Campgrounds.  This is a county-run RV site but is also has tent-only sites, and is located right on the Indian River.  Indeed our tent site looked right at the water in a park studded with palm trees and Spanish moss overhang.  It even had grass.

Jack and I sort of had to relearn the tenting routine, but it all came back quickly.  Lots of squirrels jumped around as we set up.  We then took a walk to the end of the campsite’s pier and enjoyed the great breezes off the water for a while.  While we were there, mullets jumped and a couple of manatees frequently stuck their noses up for air, maybe 50 feet from the pier.  Because their noses were sort of pointy, we weren’t really sure whether they were seals or manatees (confirmed later).  Pretty cool.

Winds picked up a lot from the east, so after scoring snacks from the camp store we returned and spent a long time on the pier, watching some dark gray thunderheads form out over the ocean and blow through.  Never got any rain, though.

By dusk, the winds died down.   This night was a special night for Jack because the Steelers were playing on Monday Night Football.  Due to an earlier inquiry, the ultra-friendly camp manager even set the TV on and to the right channel in the camp’s recreation center, and was now finding us in his golf cart to deliver the remote to us.  Does it get any better?  Ask Jack.

At halftime, Jack and I returned to the end of the pier, now dark.  It was really cool to see the pronounced bioluminescence in the water, visible whenever a fish would create turbulence.  As the camp manager had suggested, we then used a bike headlight to beam the water’s surface.  In the right spots, dozens of mullet freaked and jumped, producing even more bioluminescence.  Soon we witnessed much larger disturbances in the water and realized that dolphin were feeding on the mullet.  Major thrashing and fish jumping everywhere!  What a show.

Jack returned to the game while I retired to the pillow.  The Bengels beat the Steelers.  Even Jack couldn’t bear to watch the whole game but he came close.

By the way, my poor knee felt immediately fine once off the bike, and it never spoke up all evening.  I reminded myself I’ve been in this position before (during the RA2011 tour).  By backing off, making adjustments, and careful use of NSAIDs, hopefully the knee will settle down.