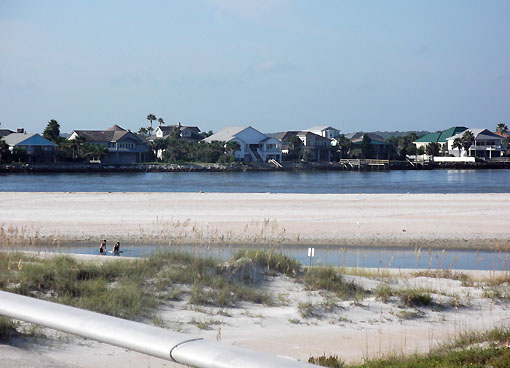 Solid sleep and slow rise around 8AM.  Yesterday’s tough ride took its toll I guess.  We rolled out down A1A and soon through Summerhaven.  Jack and Fran have been threatening to buy a vacation house in this community, and Jack pointed out the area as we rode by, a beautiful location on the waterway.  Then twelve miles to breakfast, which seemed like long miles into the continuing headwinds.

In Palm Coast, Google Maps pointed to a cafe on the ocean, but as we headed there nothing felt right – no shops or sidewalks or other businesses.  We ended up at a resort entrance, and finally asked the golf bag boy where The Atlantic Grille might be?  Right here at the Hammock Beach Resort!

We took a really great table overlooking the ocean and the green of a long par 4.  The breakfast buffet, shade, and breezes off the water planted us there for almost 2 hours.  We sat and watched a few golfers and didn’t want to leave.

Eventually we had to and continued south.  The heat and humidity made itself known again.  I stopped for a breather in Beverly Beach, thinking Jack was maybe 100 yards back.  No sign of him, though, for over 5 minutes, and I was figuring he’d had a flat.  After another 10 minutes I started thinking worse things – you just can’t help it.  I finally turned around and started back north, just in time to see Jack emerge on the oncoming side.  Whew.  He’d had a home emergency – his home internet had gone out and Fran was in withdrawal.

We stopped in Flagler Beach and got cold drinks at the 7-11, then stood at the beach access checking out the scene for a long time.  Unlike most places, Flagler Beach has direct access to the beach east of A1A, instead of the usual buffer of private properties.  The place has the feel of a Mexican beach town, with lots of representatives from the Harley and Nascar crowd.

South of Flagler, the road jogged to the riverside along John Anderson Drive, with the miles long and hot.  Properties are nice in here, old time Florida coast but only going for $300-500K, with lots of Chevys and Hyundais out front.  We stopped beneath a shade tree for another breather and discussed all the various nuances of today’s home internet options, since it was on Jack’s mind.

When we reached Ormond Beach, we dutifully followed our AC maps over the bridge, only to realize that our motel was located out on the barrier island we’d just left.  Back over the bridge we went, climbing up and over right into the E headwinds.

The continued A1A road south lacks a bicycle lane or shoulder but fortunately traffic was thin here in September.  Frankly, I’ve never seen so many beachside gift shops – you know the kind:  styrofoam surf boards, beach buckets, sun lotion, and cheap tee shirts.  Such stores are lined up here side by side, for miles.  How can the market support them all?  Evidently it does.

On the ocean side was a long row of highrise condos.  We rode 12 miles into hot winds, weaving around the occasional parked car, through Ormond Beach and Daytona Beach. I got a big grin when I spied an iconic round tower building, the Peck Plaza.  At the top of it, Linda and I had enjoyed one of our first restaurant dinners as man and wife way back in 1981.

I started getting pretty weary, maybe even into a light bonk.  We finally found Fratelli’s Italian for fuel.  The staff there is really nice and they were interested in our ride.  Jack ordered a veggie sub while I went for a chicken and spinach pizza.  The food tasted great and we complimented the chef, who came out and welcomed us and suggested we post about his place on Trip Advisor.

Further south we located our place, the Day’s Inn Oceanfront in Daytona Beach Shores FL.  The staff is nice enough, but the place is smokey and dingy, some might even call it a dump.  Its single redeeming value is its killer view of Daytona Beach and the Atlantic Ocean, which we enjoyed from our 6th floor patio.

This second day of hot headwind riding had us bushed again.  Showers and TV football again.  Too tired for more food.  More TV: baseball NY-BOS and OAK-SEA and the Miss America pageant.

I woke several times before midnight and went out onto our porch to watch lightening as it approached from over the ocean. A really pretty show, breezy and finally cooler.