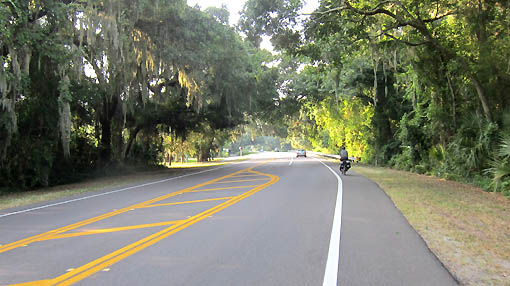 Ever sticklers for frivolous cartographic details, Jack and I decided that an authentic “top-to-tip” ride of the Florida Atlantic coast would have to start within sight of Georgia.  So instead of starting our ride from our rental condo in Fernandina Beach, we packed up the bikes and took a morning drive north into Fort Clinch State Park.  We reached the entrance gate, and hoping to avoid the entrance fee, we explained that we’d simply be driving up to the northern end of the park and riding our bikes out within a few minutes.  The ranger’s reaction, “That’s nice.  $6 please.”

We found a perfect launching point with Georgia in view to our left across the St Mary River, and the wide open Atlantic in front of us.  We made final assembly and then posed for start photos with Linda.  A glorious morning!  The mild westerly winds were a pleasant surprise, with our route heading SE.

As we ceremoniously started our roll out of the park, Linda soon caught up, snapping photos from the SUV.  We figure Linda was probably celebrating herself – free at last – and was off to explore a few days of new golf and new resorts Florida style. Still in the park, we rode beneath long paths of old overhanging trees.  Our tour was officially underway!

South down the quiet beach road of Fernandina Beach, we passed other morning cyclists who’d wave hello.  We eventually turned inland a little bit, with no view of the ocean and lots of tree cover.   Twenty-five miles took us across bridges off Amelia Island and onto Big Talbot Island, and finally to a ferry that crosses the St. John River. We crossed several bridges with excellent views of marshy creeks.  At one, a group of kayakers were doing a morning birding excursion – an activity for sometime in the future.

To our surprise, the ferry sat there loading and we barely stopped pedaling to board. In only another minute, the gate was closed and the ferry powered up. Another cyclist stood with us and we talked about bicycling touring. Of course, he asked, “How far have you come?” and we had to laugh and tell him, well, from Fernandina Beach – big deal.

We docked and rode south from Mayport, skirting the naval station and shipyard.  Only after a few miles did we realize that the ferry did not charge us anything.  Traffic started getting more congested, and we made a few inelegant road choices too, seeking out breakfast.  No worries.  Jogging south and east, we finally found the northern reaches of Jacksonville Beach, asked a few locals, and ended up at Lily’s Coffee Spot.

As we entered the place, and girl looked at me and commented about my cycling clothes.  She said, and I kid you not, “I wish I could wear that.”  Hmm, what does one say to that?  Lily’s is a pretty busy little beach spot, good for egg bagels, coffee, juice, and a couple of tasty fruit cups.

We continued south along the water, making up our route.  Neither of us had a map for the ride today, but Google Maps shows that one can basically follow the ocean, so we figured that heading south and east could never get us in too much trouble.  The quiet neighborhoods along Ponte Vedra Boulevard were quite impressive to me, some very nice homes and properties.

The route finally linked back up with A1A and turned into a long desolate stretch along the barrier island through marshy estuary reserves.  The winds had shifted, now about 10 knots from the E, with us heading SE into them.  Add in 90F and 80%RH and the we’re talking about some challenging riding conditions.

We stopped at a small park to rest and snack.  There was a statue of Ponce de Leon, with inscriptions that declare that he landed here back in the 1500s and that the lands are preserved much like he would have seen them.  I got a few nifty photos of butterflies, especially a frittilary that posed for me just right.  Of course, I had fun looking up the names of them afterwards.

We stopped at a gas station for much needed relief and cold drinks, and sat with a Harley rider.  Ten more hot headwind miles into St Augustine.  Even before we reached the town, we started seeing event parking signs and crowds.  St. Augustine was hosting a big concert event tonight, one called the Gentleman of the Road Stopover tour featuring the Mumford and Sons band.  Virtually every motel and campsite was booked for miles around.  Some of the mom & pop parking spots advertised parking for $50, although most were about $25. The town was bustling.

Jack led us to the Old Town section, centered around the Castillo de San Marcos fort and the prime tourist row.  We dismounted and walked our bikes through the crowds, people watching and seeking out a dinner spot.  Some of the restaurants had closed their kitchens due to the crowds, instead offering only drinks or cold box meals.  Eventually, though, we found Columbia, a Spanish / Cuban restaurant.  The place was definitely upscale, but the dress of the other diners defied that notion, and so we felt acceptable in our cycling clothes.

Jack’s eggplant entree looked excellent.  I had a plate of mahi grilled in a citrus sauce, served with yucca, plantains, and saffron rice.  Absolutely wonderful.

Unfortunately, we still had riding to do.  The only reservation we could get was a private condo unit 8 miles south of town in Crescent Beach.  We took to the ride in waning sunlight and continued headwinds, stopping once for snacks (juice, yogurts, sodas).  Even the condo unit, Beecher’s, was flashing its “No Vacancy” sign when we arrived.  Our room was perfect, just next to the office and on the 1st floor, built-in mini kitchen and fridge, functional TV.

Jack and I settled in after today’s tough ride, over 76 miles.  We caught the Auburn-Mississippi State game, took showers, sent texts to wives, but otherwise crashed and burned.  Today was a tough long day of riding in humid heat and headwinds and we were bushed.  Great scenery though.