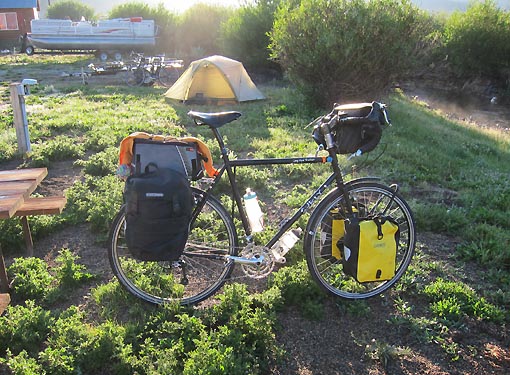 I awoke real early this morning.   Stable horse syndrome.  This is the last day of our tour.  In only hours, we’ll be at our end point.  Just like last year, it saddens me a little bit, but I’ll see my Linda again.  I lay awake in my sleeping bag breathing the cold air, waiting for 6AM to arrive.  When it did, I started to pack up, and had it all finished before 6:30AM.

When Jack emerged from his tent, he took one look at my already-loaded bike and asked, “What, are you crazy?”

There was little benefit.  The restaurant didn’t open until 7AM, and, wow, it was really cold, down in the 40s.   I sat at the picnic table for a while, watching steam rise off the creek surface.  Finally I saw Tim stirring.  They’d stayed in both of the teepees last night (for an extra fee), not wanting to mess with their tents.

Tim called me over, nodding to the teepee, and said, “Check it out.”  At first, I saw about 3 inches of water collected on the floor at one edge, thinking, man, that sucks.  As I peered in further, I saw the real attraction: a gas-fired central firepit.  The teepee was cozy warm inside!  Man!  And my tent had been cold and soaked with condensation!

Jack and I sat with Tim and Steve at breakfast – it was great talking with them.  I asked them for any advice they might have, thinking of passing it on to my friend Bill, who plans to try this ride in a year or two.  Tim stated, “It’s tougher than you think it will be.”  For reference, I also noted that they rode with rather large backpacks, which they said was not such a good choice.

I learned that both were math teachers out on a summer adventure.  Tim lives and teaches in North Lacrosse WI, while Steve currently teaches in Qatar.  Their plan was to complete a border-to-border (Canada-to-Mexico) ride in 31 days, but they stated they were about one day behind that pace.  They were planning 110 miles today!  Man, hats off.

We lingered in the restaurant, then were on the road by 8:45AM or so.  We’d really built it up in our minds, but it was only a 10 mile climb to the summit, with about 2800 feet of climbing.  Heck, we’d already bested that several times this trip.  Still, we knew it’d be a chore.  Jack estimated about 4 hours and I estimated about 3 hours.  We’ll see.

We were right – it was a chore.  A long grind, so we just gutted it out.  The scenery changed to pure beautiful alpine.  Near the top I spied repeater stations, always an encouraging sign.

I reached the top at 10:58AM, or 2 hours 13 minutes, and Jack was not far behind, so our estimates were obviously inflated.  But it felt great to so high up: 11,322 feet to be exact, and on the Continental Divide.

We lingered for a while, bought trinkets at the tourist store, slurped ice cream and soft drinks, and took the obligatory we-made-it photos.  Not only did it feel good to be up so high, but it felt good knowing that everything was downhill from here (Jack may contest that statement).

We donned rain jackets for the descent, both for warmth and visibility.  I am quite certain that Jack loved it, but it was just a little too steep and long for me.  Pretty soon my hands were cramping up from being poised on the brake levers.   There was very little shoulder, so we were out in the car lane most of the time, doing 30 to 40 mph.  You had to look way ahead for road debris and imperfections.

Ten miles went by like – that – all at something like 7% grade.  When we finally eased up into 3-4% grades, I was pretty glad.

We zipped through Mayville, and made a jog on US50 through Poncha Springs, barely stopping to look around.  The mild downhill persisted even here 20 miles from the summit – what a descent!

We stopped briefly, checked our iPhone maps, then found North F street in Salida CO.  We continued a sweet downhill glide through old neighborhoods to reach the historic sections of town.  Looking ahead, there was Linda waving her arms and jumping up and down in the middle of the street.
We made it!

One thought on “UTCO16 – Monarch Pass”