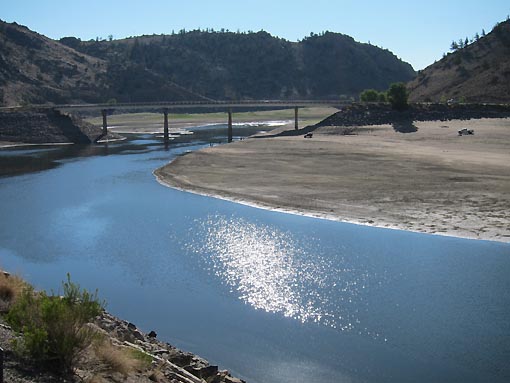 Light pattering rains made for great sleep last night.  We set out fairly early, making our way around Blue Mesa Reservoir.  The road rose ever so slightly, but we could hardly tell due to a mild tailwind pushing us along.  Another glorious morning to be riding.

The wide shoulders continued on SR145 as it wound through some stunning canyons beside the Gunnison River.  The morning sun glistened off the water and fly fishermen waded around, like a scene from a gorgeous postcard or something.  The land finally opened up flat for 10 miles or so approaching the town of Gunnison itself.

Jack and I regrouped at a touristy store, then spun into town, finding the “W-Café” on a main drag for breakfast.  It too was infected with tourists, but the food was really good, and we managed a nice conversation with two ladies at a neighboring table vacationing from Colorado Springs.

Fueled up, we continued eastward on US50 on a 10 mile straight stretch that rose ever so slightly, only a few hundred feet through mild rises and falls.  We regrouped in Parlin, stopping to photograph a Wildblue dish above the post office there.    We regrouped again in Doyleville, which contained nothing as far as we could tell.

The usual afternoon storms again began to percolate as we wound through a few canyons prior to Sargents CO.  As the winds swirled and intensified, so seemingly did the climbing, finally requiring us to gear down.  Certain of rain, I even slapped on my rain jacket for a mile or two, then took it off again when the threat subsided.

Entering Sargents CO, we soon realized that it was basically a single-business town, revolving around the Tomichi Creek Trading Post.   They seemed to offer it all – food store, bar, grill, cabins, RV park, teepees, and tenting.  The desk clerk, named Leon, overheard us mention an interest in cabins, and immediately put an end to that idea – they were full.  We asked about tenting – at least that was OK ($10pp).  He directed us out to a spot next to some big tee-pees.

With some dismay, we saw that the “tenting” ground was a small and lumpy bare gravel yard highly populated with sticker bushes.  As an added attraction, some kind of ground rodent had plowed up most of the area, creating numerous hollow spots.  And I could just see one of these critters popping up at night beneath a tent floor.

Although a stretch, we both found a barely acceptable spot for a tent and set up.   Lunch at the grill was great – burger and fries for me.  Oh yeah, and catsup (a primary cycling fuel).  We lingered for an hour, talking with the staff, and wondering what we’d do this evening.  They had box games in the back, but then also announced that they had horseshoes.  Now there’s a plan!

About 5PM, we re-entered the bar with a plan to enjoy a glass of wine, then start the horseshoes tournament.  A blonde server pulled out bag of white wine – she thought it might be chardonnay – and poured us two glasses.  We laughed about the bag, so she asked us to taste it first because she wasn’t sure how old it was.   Wow – what a vintage twang.  It tasted like yeasty dust, maybe something like Vegemite and vinegar.  Annie (server) tasted it too and made a face, taking the glasses away.  She opened a new box, which was supremely better!

As we sat and nursed the wine, the skies turned dark, the winds whipped up, and the rains started.  Unlike most afternoons, though, these rains stayed.  And stayed.  Pretty soon it was clear that our big horseshoes tourney was cancelled.  A beer-swilling party out on the porch eventually came inside, among them a friendly character named Barb.  Barb seemed to have fun bawdy comments for anyone, flirted with anything male, and we had fun kidding with her.

Annie linked us in conversation, and was soon seated at our table tackling a beer.  The conversation was engaging and wide ranging, from life on Maui, to ex-husbands, from drug use, to mountain sports, from wild critters, to friends with cancer.  A young guy from Kansas soon joined us.  He was vacationing in the area, dirt biking and rafting.  He’d completely lost his buddies, and decided that whiskey would be a fine substitute for them.

The banter at the table was so good that Jack and I totally missed the closure of the grill at 8PM.  When we mentioned food, Annie offered to take a couple of frozen pizzas out of the cooler and heat them up – what a sweetie.  To say that we enjoyed an evening in Annie’s company is a complete understatement.

Around 9PM, two cyclist showed up, decked out in Goretex , full gloves, and looking, well, bedraggled.  These guys had obviously been working hard, and they called out for beer.

We met Steve and Tim, working their way south down the Great Divide trail.  They stated that, at the pace they were doing it (~100 miles a day) they weren’t really “touring.”  They’d just completed a ride over a nearby pass (not Monarch but another one close by), in both rain and hail.

I smiled, realizing that Steve and Tim had certainly “upstaged” us as the resident cyclists in the bar, but we didn’t mind a bit.  They were a lot of fun to meet, and, man, their riding was both hard-core and impressive.
The bar talk continued at a brisk pace, but Jack and I finally thanked Annie and ducked out around 9:30PM – we have what we consider a tough ride ourselves tomorrow.