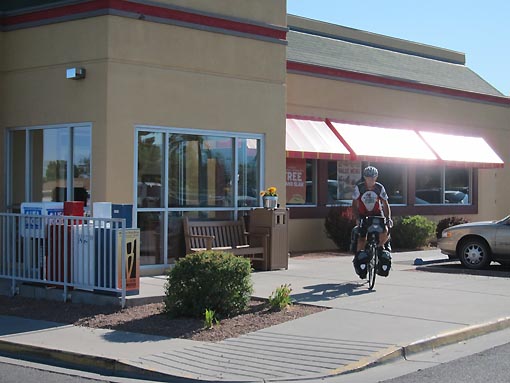 Another early morning, up and packing.   We were dismayed (at this $30 rate) to find the rest room didn’t even provide toilet paper – fortunately we both had personal emergency supplies.

We spun down the rode and quickly found a Denny’s in Montrose.  Their breakfast menu has hundreds of items, and we laughed when both of us picked out the blueberry pancakes.

We turned east on US50 in Montrose.  Not out of town yet, I decided I needed to check in on my step mom’s recent medical issues involving a hospital stay and rehab, and so stopped to call.  I was very pleased to learn that she is recovering in good accord.

US50 does a nice steady 14 mile climb to almost 8,000 feet, topping out at a place called Cerro Summit.  From there Jack and I zipped down more than 1,000 feet, giving up our gains and arriving at the tiny town of Cimarron CO.   We stopped at Newberry’s rock and food store for Cokes.  I asked the lady clerk, “Do you have a water faucet?”

“Well, we have well water over there <pointing>…”  I start over.  “…but I don’t drink it…” which had everyone in the room laughing.

We hit the road again and the temperatures were really starting to rise.  A half mile outside Cimarron, Jack had already started up the second hill, but I spied a store and decided one more cold Pepsi would be a good investment, and so parked and entered the Pleasant Valley store.

It was really neat in there – the owner takes an obvious pride on fixing it up just so and keeping it neat.  A full-sized model cowboy sits in one corner, and there are great slogan signs on all the walls.   I sat at the old fashioned wooden bar and had a Pepsi, checking out the place.

Today’s second climb was tougher than the first, topping out at a place called Blue Mesa summit at 8,600 feet with some steep sections.   We regrouped there, then started the descent.  The shoulder disappeared as we dropped a quick 300 feet, winding our way through tight red walls canyons, a little scary but fun.  The shoulder was actually eroded well into the lane at some spots.  We then started in again on another testy climb.  Sharing the road with tight traffic at 5 mph was not much fun for me, but fortunately this third “mini” climb was fairly short.

From the top, we finally got our first look at Blue Mesa Reservoir below us, then started a sweet 8 mile descent, dropping about 800 feet in the process.  The wide 6’ road shoulder fortunately re-appeared to make the ride a real joy.  We reached the town limits of Sapinero and stopped at another rock shop for a quick regroup.  Another mile or two, with increasing headwinds, plus an added steep climb up the driveway, brought us to Murph’s Place and the Sapinero Village Store overlooking the Blue Mesa Reservoir.

A storm was brewing nearby, which made for gray skies and shimmering blue water, creating a great effect.  We ducked inside Murph’s lace, a tiny bar, and asked about provisions for dinner.  The lady proprietor seemed stumped at this request first, but then led us between buildings into the Village Store, which was sparsely stocked with groceries.

They had everything we needed.  Hamburger buns, sliced cheese, sliced ham, mayonnaise packets, crunchy Cheetos, and sodas.  Perfect.  I thought a cold beer might be nice, but they couldn’t sell me a single, only a six-pack.  However, they could always serve me one at the bar.

We adjourned to the bar and then thoroughly enjoyed the company of the lady owner and a patron seated there.   We learned that she is from Iowa and knew all about Ragbrai (on Jack’s cycling jersey).  Likewise,  Bill (the patron) also knew about Ragbrai, and we talked cycling, weather, motorcycles, and local happenings.  It was a very fine hour indeed.

The winds started picking up, so we bid our farewells.  They actually became ferocious tailwinds as we crossed the lake bridge, then headed east about 5 miles along the coast road.  Without even pedaling we were both doing 20 mph.  We reached our first candidate campsite, a NPS place called Red Creek.  Unfortunately, all that was there was a sign and a dirt road that rose straight up the hill.   We didn’t know if it was a tenth of a mile up, or 10 miles up. Rather than take the risk, we instead turned downwind again and rolled another 2 miles to reach Dry Gulch Campsite, also a NPS area and part of the Curecanti National Recreation Area.

In only a ¼ mile we found some self-serve campsites, marked off among a narrow grove of cottonwood trees.  Neither Jack or I had the correct change for the envelope ($12) so we just put a $20 in there and called it a donation.  The grassy site surfaces hadn’t been mowed in a while – I’d term them as “scroungy” but otherwise OK.  The winds blew and raindrops began to fall, so we laughed and scrambled to set up our tents before the downpour.

But it never really happened, and the whole thing blew over within a half hour.  We emerged from our tents and sat down for a tasty dinner (yum – Cheetos).

We hit the tents quite early tonight – it had been a tough day of climbing, possibly the toughest since day #1.  [Note: This is not actually true, but it was a thought that evening.]