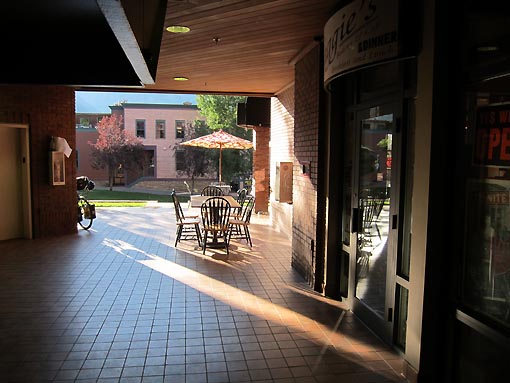 Woke up early this morning, looked at my watch, and I must have dreamed that it said 7AM.  I fell back asleep for what seemed like 90 minutes, then woke up again.  It was only 7:05AM.  I’m not sure of the significance, if any, of this.

We packed up and rolled into town, finding a promising breakfast place we’d scoped out last night called Maggie’s.  A vibrant lady took our order and helped serve us, one of those ladies who might have been 63 but hopped around with the energy of 32.

We took a great table outside, took in some morning coffee, and then took in some very excellent breakfast, mine a plate of huevos machaca, seasoned up perfectly.   It was such a fine place we lingered there for a long time, finally talking at length with a friendly road cyclist who provided us riding tips for the roads around here.

Still, I was actually a little bit glad to leave Telluride.  Not my kind of town.  A strange hyper-tourist vibe to the place.  It was the same feeling I got in Santa Barbara, but much more intense and not pleasant (to me at least).

We labored back out the 3 miles of bike trail (ugh) and then back onto SR145 headed north.   This segment too is very poor passage for cyclists. Being downhill most of the way helped a little bit, forcing us out into the car lane around half the traffic speed.  But a steady flow of semi-trucks and impatient work trucks made it quite unsafe with only a 6” shoulder.  I would have hated to ride it headed south, uphill.

And I was scratching my head a little bit about it anyway.  Roads both in and out of Telluride were terrible for cyclists, and yet the town is brimming with outdoor-sy athletic types, and the town charges exorbitant local taxes.  Someone needs to get on the stick here.

We turned east onto SR62 in Placerville, and, thank goodness, found an excellent shoulder width.  We started a long steady 13 mile climb to almost 9,000 feet, topping out at the Dallas Divide.  During the regroup, I talked to 2 road cyclists out for a daily workout coming up the other side from Ridgway.

A WONDERFUL but manageable (4-7% grade) 11 mile descent rewarded us on the other side, and the views of the San Juan Mountains were simply indescribable.

I was still stuffed from breakfast, but we pulled over anyway into a local Ridgway ice cream shop.  When we ordered milkshakes, the proprietor grinned and said, I’ll be right back.  He walked across the parking lot to the store for some milk.  I liked this place right away.  AND, he made the shakes with real (vanilla and coffee) ice cream and milk – the best way.  Heaven – I’m in heaven.

We talked with some friendly locals about alternate routes from here, since we’d heard the road north to Montrose was hazardous for cyclists.  They agreed but said it wasn’t too bad, and cited regular deficits in the Colorado highway budgets to fix anything soon.  They also offered some way-off-course gravel county routes, which we decided to pass on.

US550 out of Ridgway started out badly, with lots of fast traffic in both directions and no shoulder.  However, we soon encountered some long patches of 6 foot shoulder, too, which was unexpected.  Approaching Colonna, the shoulder again disappeared, making for very hazardous conditions.   Jack seems immune to such situations, since he rides regularly like this in Atlanta, but I must admit I am most often uneasy with them.

We finished the 15 miles to Colonna, and I was VERY happy to get off the road in one piece at a convenience store.  To my great relief, the remaining 10 miles into Montrose were a smooth 1% grade downhill and equipped with a wonderfully wide shoulder, safe as houses, as they say.

A few miles outside of Montrose, we found a possible campground at the Hanging Tree RV Park, but decided it was too close to busy US550 for quiet sleep.  We then rolled down a side road to the King Riverbend RV Park and were greeted by a nice woman who came out in a golf cart to work with us.  She stated their price for tenting, $25 per person.  What!?

We objected and, through a call to her manager, she lowered the price first to $23 pp, then $20pp.  We stalled and continued to chat, finally blurting out that we just couldn’t accept such a high price – it was too far above the going market.  She countered about how much she had to pay her employees, etc.  She also said that all prices were this high here in Colorado.   We countered that Priest Gulch had only charged us $20 for the both of us last night, at a prettier site, too.  It happened that the lady was friends with the folks at Priest Gulch, and so at least she respected this price.

We finally asked that she simply drop the “per person” part and accept a flat $30 rate for both of us.  She called her manager (Jack quipped that there probably wasn’t anyone on the other end of the phone), and the price was settled.  For that, we set up our tents next to 2 big tee-pees in a grassy side yard of the RV park, with access to the rest rooms and showers, etc.  Still an excessively high price, but at least not $134 for a room.

Jack and I discussed and then decided to cut our trip a couple of days short, finishing Sunday 7/22 in Salida CO instead of the original plan for Tuesday 7/24 in Pueblo.   The reasons are multiple: a) we have no specific desire to see anything in Pueblo, b) we would like to complete the ride over Monarch Pass, c) we can use the extra days to do some golfing together, and d) Jack can use the extra time to visit with his son in Phoenix.  I called Linda to discuss these changes, with added golfing on the return ride, and she was immediately fine with it.  A darling.  We agreed on a 3-day drive back to Phoenix involving golf in Pagosa Springs CO and again in Farmington NM.  Sweet.

After we pitched the tents, I rolled back up to the little Hanging Tree store for nibbles, grabbing a bag of spicy chex mix.  I also wanted a beer, but they sold only 2 kinds by the bottle, huge 32 oz. bottles of Miller High Life and Miller Lite.  Rot gut.  I hated to buy so much beer and take it to the park (in a brown paper bag no less).  Talk about your hobo look.  But I decided it was the only choice – I could simply pour out what I didn’t want.  I asked the lady for a cup and she complained that she normally needed to charge for one, but gave me a Styrofoam coffee cup for free anyway.

Jack and I rejoined at a picnic table and worked on dinner.  I learned that beer in a Styrofoam cup is a mistake – there are just too many nucleation sites – and the beer turns flat very quickly.  Still, I drank about 1/3 of the bottle, then poured out the rest.  We moved to a bench next to a sort of dreary waterway.  One of the RV-ers was fishing there, and he actually caught a nice looking one, throwing it back immediately while I applauded.

Jack and I then started an earnest game of stone throwing.  The pickings and bank were unsuitable for skipping, so instead we took aim at various targets on the opposite bank, getting pretty absorbed in it all for a while.  We even played a game of skeet for a while – that was tough.

Back at the tents, I worked on this journal and some honey-roast peanuts for a while, but the mosquitoes started getting pretty bad around 8PM so I ducked inside.  It was warm and humid in there and I hoped it would cool down soon enough. As if to answer my desire, we enjoyed about 2 hours of scattered evening rain which cooled things off beautifully, and I listened to Utopia’s POV while it fell.

We could be in for a reasonably tough day tomorrow, with 2 distinct climbs.  At least our plan to hit Montrose for breakfast will be a good start.