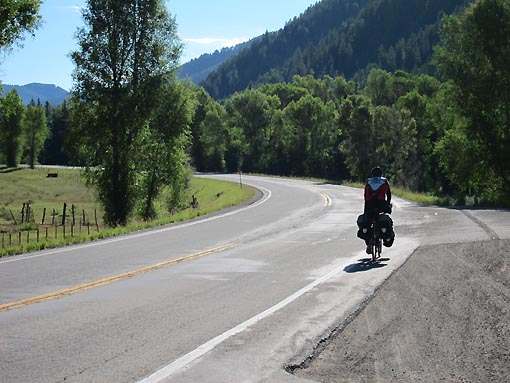 Early in the morning, I awoke with a jolt, sitting upright in my tent.  Very close by, I heard what sounded like a party ratchet noisemaker going off.  Chipmunks!

To add to the already great attributes of this campsite were the stars last night – the best yet!  Brilliant clear starry sky with dark background – does it get any better?

It was cold last night, too!  I slept comfortably, but with wool socks on, with sleeping bag fully zipped and head tucked inside.   I spotted Jack trudging back up from the rest room in his shorts and tee shirt, shivering.  He looked at me and stated, “Three dog night.”  Yeah – must be in the low 40s right now.

I emerged from the tent in leg warmers, Nike base layer, full finger gloves, cap, and my rain jacket.  So THIS is why I’m carrying all this stuff up and down mountains.  The next half hour I spent seated at the river bank table, soaking up the sounds of flowing water and watching a couple of flyfishermen casting the river.  Does it get any better?

Out onto SR145, Jack and I started back into the steady climb of yesterday, and rode 11 miles into the town of Rico CO seeking breakfast.  Nothing seemed open, but a postmaster eventually pointed us to Annie’s Café, which we found populated with motorcycle riders and a few others.  We ordered, then spoke with the bikers out front, who were interested in our travels, how much ground we can cover in a day (about an hour’s worth).  Seated outside starting at the mountains, this was a great place for our egg sandwiches and coffee.

Another 12 miles took us to the summit of Lizard Head Pass at 10,222 feet.  Some of the climbing was tough, but Utah hills seemed harder than these ones.  The only complaint was of black fly armies that seemed to attack one’s waist and arms at any speed below about 10 mph.  When they’d get too pesky, I’d press up to 12 mph, then slow back down and wait for another group to form.  <sigh>

At the top, however, brisker winds kept the flies away.  Views of several 13,000+ foot mountains were there, and of the very beautiful Vermillion Peak in particular.  I meditated and munched Wheat Thins in a light rain for a while, and eventually met Don, who emerged from an RV parked nearby.  An Asian (or Hawaiian?) fellow of 75 years, he commenced into very friendly chatter touching on many topics – travel, history, technology…He spoke of the San Juan railroad, of Tesla and Edison, and of a big bicycle event scheduled out of Durango.  Very friendly guy, seemingly starved for conversation.  He said he’d been living out of his RV for more than 16 years now.  Jack and I enjoyed talking with him.

Five miles of screaming downhill were our reward, despite a thin shoulder in this section.  At 35 mph you pretty much have to get out in the car lane anyway, so a shoulder is not that important.  We’d detected a “nipple” in the elevation profile, however, which turned into a 500 foot interim grind before continuing down the mountain.

Unfortunately, we hit a single lane construction zone and had to stop and wait.   I took the lane and assumed the position of a car when our 25-car caravan was allowed to pass through.  It pained me to have to ride the brakes down 3 miles of steep downhill only a few feet from the bumper in front of me.

As we descended, a car crossed the center line and pulled up side-by-side with me.  The driver calls out, “You crossing the country?”  He started asking all sorts of other questions, too, so I decided to just give one word answers, and let him do the talking while I paid attention to the road.  The guy seemed to be crying out for some kind of camaraderie but sure was going about it in a funny (and not so safe) way.

I found out later that this guy did exactly the same thing to Jack when he had passed him.

I stopped and waited at the SR145 spur for Jack.  He rolled in announcing yet another low rear tire – man!  He gave it a few pumps, hopefully enough to get us up the bike trail and into Telluride.

And I use the term “bike trail” very loosely.  What Telluride calls a bike trail ought to be condemned.  For 3 miles, every 40 feet brings yet another huge expansion crack, rattling your bones and chattering your teeth.  I stood up on the pedals for almost the entire length of it.  Welcome to Telluride.

We entered town, stopping first at the visitor’s center to ask about camping options.  They directed us to the city park for free camping – great!  The town gives off a strange charm immediately – full of tourists, but also full of young hippies, castaway hippies, backpacker types, pretty girls, ski bums, and transients.

Further down the main drag, we found the Paragon Bike Shop.  Jack scored big here, first with yet another tube for the flat repair.  They also had some great touring-style bicycle shoes that fit him even better than his old ones.  Goodbye duct tape shoes.

We found the city park at the south end of town.  Several signs proclaimed the campsite “full,” but we know that almost all places will accommodate touring cyclists in some fashion, since the options are more limited.  I talked to an employee who was polite, but flatly refused to allow us.  She suggested that we find an existing camper who would sublet some space for us.

I cruised into the campsite and met a touring cyclist from New Zealand, so we chatted a bit.  He offered to give us his perimeter space, but also suggested I go look at the primitive end of the campsite, where he said there was plenty of open ground.  I did, and he was right.  A few marked and populated campsites were there separated by lots of open ground.

When I returned back through, my NZ friend grabbed me to tell me he’d just now given away his leftover space to someone else.  Wow – um, thanks.

Back at the park offices, I suggested that we’d be happy to pay for a spot in the large unmarked areas between the primitive campsites – that there was plenty of room for a couple of tiny tents.  She agreed there was lots of room, but refused, explaining that transients would start taking advantage if she did.  Hunh?  Frankly, it pissed me off – I guess I don’t enjoy unthinking bureaucrats very much.

Now denied by the Telluride gestapo, Jack and I set up to repair his tire in front of their office, and to regroup.  A friendly couple and a kid came by and started up a conversation with us, and Jack let the little kid “help” with the repair, operating the tire pump, etc.  We considered two possible remote campsites (out of town) and so we figured we’d check out lodging opportunities in town on the way to them.

We rolled back through the busy main street, and I almost felt like we’d shown up at a Jersey beach town in the summer without a reservation (I did this once in Ocean City Maryland in August), thinking, we just might be screwed here.  For many blocks we didn’t even see any lodging, let alone vacancy.  The Adventure Cycling maps eventually steered us to the Mountainside Inn at the edge of town.  A sign proclaimed, “Walk-ins Welcome,” which at least seemed mildly encouraging.

The room price was given as $109 and available.  Steep, but since we wanted to explore around Telluride and eat here tonight, we soon sold ourselves on it   But add in a whopping $25 more local tax – welcome again to Telluride.  Still, we are happy to have a place to hang our hats (and rest our bodies).

We changed into civvies and hit the sidewalks.  Two touring cyclists (Aaron and ?) arrived just as we hit the main street so we stopped them to chat.  We told them of the camping situation over in the city park, and they replied that they’d probably just stealth camp somewhere anyway.

The weather was perfect and the evening sun painted the town beautifully. We found the Brown Dog sports bar for pizza (recommended earlier by the visitor’s center) and took a table on the second floor.  Our huge 18” pizza was really good – it was all we could do to finish it off.  Sitting there taking in the 6 or 7 flatscreen TVs felt like the lap of luxury.

A good day (except for the ignorant city park employee).  OK, I’m over it!