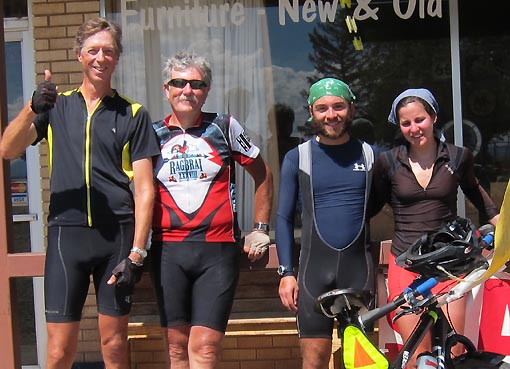 Up at 6:15AM for coffee, and we got the bikes out of the laundry room with no difficulties.  We rolled a few hundred yards west to an unnamed café for breakfast, and talked to a real friendly plumber from Ontario for a while.

Off down the road, the riding was easy and smooth, with a series of rolling hills with gentle grades.  My poor odometer once again started reading 0.0 mph, so once again I stopped to try fixes.  Deciding that the receiver side also probably needed a battery, I was glad I had one, and worked about 15 minutes trying to figure out the tricky packaging of the cyclometer.  Once I got it replaced, the thing worked like a charm.  I suppose the very low battery had been plaguing the unit the entire trip, making it sensitive to the slightest changes.

We passed through tiny places called Pleasant View and Yellow Jacket.  In Yellow Jacket, we ran into westbound touring cyclists Madeline and Woodrow at an antiques shop, and stopped to chat.   They were extremely friendly and had been on the road for a couple months now – seasoned road warriors.  They’d started in Vermont on May 11, followed the Northern Tier, then the Trans-Am, the Great Parks route, and finally linked up with the Western Express.  We talked gear and injuries.  Woodrow was just getting over an Achilles heel issue, remedied by splints he was now wearing.  Several group pictures followed.  We sure hope their tour is finishing up nicely.

We rolled through Lewis CO, where every business was boarded up closed, and onto SR184.  Unfortunately, this is one skimpy and dangerous cycling road.  I can only assume that the Adventure Cycling folks had no other choice to make.  About 11 miles of thin or zero shoulder two-lane, with moderate traffic levels of semi- drivers (who are normally courteous) and redneck pick-up drivers (many of whom think they might personally hold the deeds to the road).

I was relived to reach SR145 for a much better roll into the charming touristy town of Dolores CO.  We found the Lizardhead Cyclery shop immediately on the west edge of town and stopped for supplies.  Jack was down to a single tube I’d loaned him, and therefore I was down to only one, too.  He also was seeking replacement cycling shoes, but did not find them here.  We talked at length with the owner/mechanic Nicholas, who had just opened up this shop about 6 weeks ago (it was not listed on the AC maps).  A good location for a shop, I think, since there are virtually none west of here on the Western Express route for over 400 miles (last one in Cedar City UT).

Nicholas was engaged in repairing a bicycle for his Italian girlfriend, who was apparently very particular about the quality and speed of the repair.  As we left, we offered Nicholas good luck with that entire situation.  And we even got to meet her briefly on the way out.

Lunch at the Ponderosa Restaurant in town.   We would have preferred a pizza/beer place where Nicholas had sent us but it was closed.  The Ponderosa food was very comfortable, mine a hot turkey sandwich with mashed potatoes swimming in a pool of brown gravy.  Comfortable.  And the salad bar was acceptable.

We examined our afternoon choices:

We decided to ride and check each of the latter three options along the way.  It was a very nice afternoon to ride and a mild westerly tailwind even assisted us on the climb.   Both grade and traffic were pretty mild , too.

Departing Dolores I passed by a restaurant and bakery, and so stopped to see what the bakery might have cooked that morning.  I found some HUGE cinnamon swirl buns, and I’m talking about 2 pounds of dough and butter and cinnamon and sugar.  I stuffed one into my pannier along with a container of icing – that could well be dinner.

In Stoner we found – nothing.  The remnants of an old campsite maybe.   There was a sign proclaiming Stoner Ranch, but nothing suggesting that campers are welcome.  An old store and café are there falling apart, abandoned.  1st strike.

In another 10 miles we reached Priest Gulch RV and Campground.  This is a full service campground with a stocked food store designed for RV hookups, and the place was jammed with ‘em.  That normally might turn us away, but instead I inquired about tent sites anyway.  They had one (of four) left, and it was the smallest one they had.  The clerk and I were uncertain whether 2 tents could fit on it, even our small tents, so I asked to go take a look at it.

As I departed down the path, a gentleman named Frank stopped me and asked all about our bicycling and touring.  When he found out I was on a mission to examine the tent site, he quickly proclaimed, “Look, just take it – I guarantee you’re going to love it.  It’s right beside a river in a great spot.  Better get your name on that registration before someone else gets it.  If you don’t like that site, I’ll buy it for you.”  Wow – I’m sold!  Instead of looking at it, I went back and paid up, then waited for Jack.

When Jack arrived we went down to check it out.  Score!  It’s an idyllic little tent site well away from the RVs and not more than 30 feet off the river.   Picnic table, tranquilizing water sounds, blue spruce pine tree cover, pine needle flooring, a fire ring, free fire wood, and just enough space for our 2 tents.  On the high end at $20 but completely worth it.

We set up.  Jack pulled his water filter out from his gear.  Even though he had plenty of water, he was bound and determined to use the thing, so he filtered out some of the river water and drank it down.  Works fine, and the water tastes good.

We made several trips out on the bikes for firewood and extra provisions from the store.  Each trip took us through the RV jungle and by a family of young boys and their dad out playing games.  Each time I’d ride by (twice each trip), the littlest boy would call out, asking the same thing, “Why do you have 3 cups?” referring to my 3 water bottles.

On one trip I ran into Frank again, who was actually an RV guest (I thought maybe he was the owner).  He wanted to know how we liked the tent site.  What a nice guy.  In fact, the camp seemed brimming with friendly groups of RVers having dinner or happy hour together – a contented community.

Dinner of Cokes, Wheat Thins, peanut butter, and the cinnamon swirl bomb.  The temperature got great once the sun set, and we could tell it was going to drop nicely overnight.

Jack had purchased a paraffin-sawdust log called a “Fire Starter” and arranged it around the wood in the fire ring.  We really got to laughing, though, when the thing wouldn’t light.  The edges of the paper would burn to the log, then flicker out.  After half a pack of matches, Jack finally asked, “You got any paper?”

We tore some pages from my notebook, added a bunch of dried twigs, and finally got the Fire Starter log going.  They burn really hot, so from that point the fire did quite well. Having a fire in camp is always a treat, and even more so beside this idyllic river spot.  Chipmunks played around our tents, and a small snake even came up from the river to investigate.  Jack and I talked of previous camping experiences and his stints as a church camp counselor and staffer.

As expected, at our elevation of 8,100 feet, it turned cold fast.  Tomorrow we’ll ride up over 10,000 feet again, but I am getting the feeling that Jack is now acclimated.  I hope so anyway.