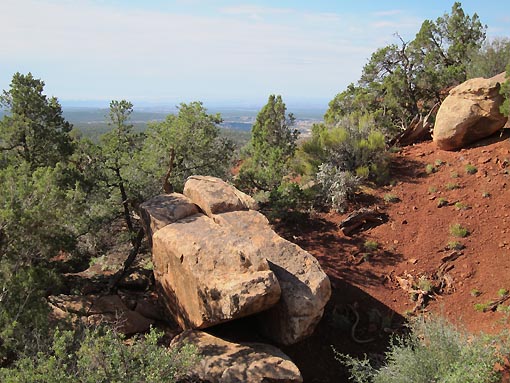 Jack got up really early, like around 5:15AM.  I think he figured we’d repeat yesterday’s plan of getting up real early to beat the heat of the day.  Maybe I hadn’t read that memo yet, because I caught myself on a snoring snort about 6:15AM, waking myself up.

We were packed and rolling by 7AM.  This had been probably the prettiest and most comfortable campsite of the trip so far, and the quietest too.  Our not-really-that-bad snores were probably the loudest thing around.  By the way, the stars had certainly been decent last night, but were masked by a thin cloud haze.

We climbed the 4.5 miles up and out of the park area back to SR95, then continued a 10 mile climb to around 7,000 feet.   We reached “Salvation Knoll,” a good spot for breakfast.  Lost pioneering Mormons had used this spot as a vantage point to return to civilization and supplies.

Then 10 miles of wicked cool 5-9% grade descent.  Fairly straight and not too steep – my kind of descent!  Drab magnificent canyons and mesas whizzed by on both sides as we screamed along.  We finally reached Comb Wash, which seems to consist of two massive reddish ridges sandwiching a deep river canyon.  The road dropped out beneath us as we flew down, probably something like 12% grade.  As usual, I was pressing my brakes while Jack was accelerating away from me, soon a speck way down the hill.

We regrouped at the river, nibbled some snacks, and surveyed the climb out.   Man, a mile that looked straight up, disappearing around a bend!  And probably around a 12% grade, maybe more!  We soon bent to the task.  Near the top a sign proclaimed “No Stopping or Standing” –  we both wondered if that applied to weary bicyclists.  We also both wondered how in the world those travelers in wagons managed this terrain 150 years ago.

The next 20 miles brought us tough going.  By mileage, probably 30% downhill and 70% uphill.  Some segments were quite long and steep.  The AC map profile is fairly deceiving here (showing only a steady low grade climb).  I think we climbed the same 400 feet about 5 times across a handful of wicked rollers that seemed to cross canyons instead of follow them.  The scenery turned quite bland and finally flattened out.

We finally reached the Sinclair station at the intersection with US191.  I had been hallucinating for miles for a quart of chocolate milk, and was disappointed that they didn’t have one, so much that I didn’t buy anything.

From there we headed north on US191 for the remaining few miles in to Blanding, seeking out camp/motel options.

The first RV park we spied looked crappy, with tiny square grass pads barely big enough for even our 2 tents.  I then spotted a large grassy city park and rode off to investigate.  Jack must not have seen my detour, because he kept going north toward town.  The park signs did not mention camping, so I looked the place up on my iPhone, now in range of coverage.  While I did so, the skies violently opened up with driving buckets of rain.  I quickly ditched beneath a pavilion roof and started wondering where Jack was.  My call to him went unanswered.  The rains were really impressive, lasting around 20 minutes.

I finally rolled back onto the highway, convinced that camping was not allowed in the city park.  I found Jack rolling around in the middle of town, wondering where the heck I was.  We regrouped at a Subway for lunch and continued to search online for camping options in Blanding.  Finding nearly nothing, we also checked out a 2nd RV park but found it too close to the highway and practically grass-free.  We settled on a nearby mom & pop motel called the Prospector Motor Lodge.

I talked with my father-in-law about some exciting new developments in his bid to defeat a referendum for consolidation in his hometown in Indiana.  Lots happening over there!

Dinner at Fattboyz Grille, which was very close by and described by some websites as the “best in town.”  Service was very good and the food mediocre at best, although I did create a 1000-island masterpiece salad from the salad bar.  We spent the early evening discussing lofty problems like health insurance and the Evansville consolidation issue.  We especially talked about politics in general, its problems, and our possible roles in helping that situation.  Such discussions inevitably start referring to “Mr. Smith Goes to Washington,” but they are healthy nonetheless.

Mindless TV, America’s Got Talent – a good way to end the day.