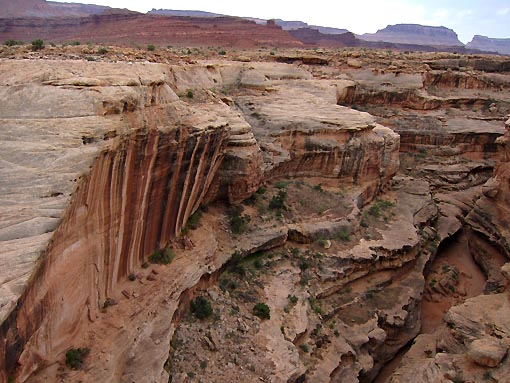 A nitwit numbskull RV owner arrived at the Hite campsite last night about 9:30pm, then proceeded to fart around for a full 90 minutes just parking the thing, idling his big truck motor all the while and barking out orders.  Then he and noisy family farted around for another hour disengaging his jet ski trailer and his motor boat trailer.  As icing on the cake, he then cranked up his generator, which ran all night long.

Why some people need so much junk I cannot figure out.  Why some people have no consideration for others around them, well I just don’t get it.  Why some people go to all the trouble of coming to a remote beautiful campground, then sit around watching satellite TV and polluting with their noise, well, I give up.  Ear plugs help.

Add in a couple talking all night long, and, because I was awake, I started keying in on some night birds that would swoop above my tent, and I got an uneasy night’s sleep at best.  Oh well.

Jack was raring to go this morning, while I stumbled slowly out of the tent, later than planned.  By 6:50AM I was packed up and slowly cranking up the hill away from the lake, only to stop again at the rest room <sigh>.  The 4 miles out of Hite brought immediate climbing, and SR95 brought multiple hills of steeper climbing still.  Good morning!

We crossed another bridge, this one over the White Canyon, and stopped.  The acoustics were great, so Jack and I spent many minutes generating different sounds, wishing we had decent recorders to capture the lovely reverb.  Jack did exactly this using his iPhone.  Again – a real treat to be able to so conveniently stop to investigate.

The road leveled off somewhat into a steady 1-2% grade.  Like yesterday, we stopped at the 10 and 20 mile marks to regroup and nibble snacks.    After about 27 miles, a female cyclist approached from the east on an unloaded road bike.  I immediately wondered – Wow, where is she coming from, Blanding?  Just on a training ride?  She called out, “Did you get wet up there (nodding west)?”  “Nope, not yet,” I replied.

At the 30 mile mark I stopped again to regroup with Jack.  While I waited, a loaded-down touring cycling approached from the east and slowed to talk.  I met Adam, riding cross country Brunswick ME to San Francisco CA with his girlfriend Leah.  He explained that they had been tagging along with a fully supported cross country MS ride for a couple of days, since the friendly group was generously providing water and snacks to them too.   I think he said there were about 14 riders on that tour, which started in Virginia and would end in San Francisco.

Dark clouds emerged over a ridge and we both predicted rain, and soon.  As the drops started, we grabbed our rain jackets and took refuge beside the rock walls of a desert wash beneath the cover of a scrub tree, and we munched on Fig Newtons.  I learned that Adam is a wilderness expert, a professional leader of camping expeditions.  He and Leah are doing the ride for adventure, but also for a worthy cause – to introduce sustainable foods to public schools.  Their organization’s website, called FoodCycle, describes the purpose and status of this mission: http://www.foodcycleus.com

The winds and rains picked up considerably, then got very severe, probably up over 50 mph.  My gloves swirled off into the wash, and then my helmet.  Finally, my bike, leaning against a guard rail, was completely blown the opposite direction, almost sliding down into the wash as well.

Adam and I were sheltered from the initial wind gusts by the rock wall, but the winds soon changed, blasting the rains directly into our faces.  It almost felt like a waterboarding experiment, but Adam and I were laughing at the experience.  Clothing, shoes, socks, all soaked through.

We waited about 30 minutes in the downpour, me for Jack, and Adam for Leah.  Both were taking longer than expected, but then both might have sought refuge like we did.  While we waited, a couple of big lightening strikes touched down very close by, which quieted Adam.  He mentioned that, while leading camping groups, one of the more difficult tasks is how to manage groups in lightening, whether or not to wake them in the middle of the night, etc.

The rains started lifting and Leah appeared from the east, all decked out in rain gear.  She’d had a flat tire and was smiling broadly, announcing that it was the first tire repair she’d undertaken without Adam’s assistance, and was feeling a bit proud about that.   The two rolled off west.

After they’d gone about a quarter mile, Jack appeared around the bend and passed them waving, then reached my spot.  He’d had a flat tire, too, #3!  While he was repairing it, the skies and winds had opened up on him – holy cow.  After seeking refuge, he returned to the task only to find his tire filled with water!  Not exactly another flat tire in paradise, but I suppose that’s in the eye of the beholder.

We continued our roll east, and for 5 miles I noticed my cyclometer was again stuck on 0.0 mph.  Well dang!  Water damage?  I stopped to investigate and finally decided that the magnet had again moved, probably during that tumble.   Got it back operating once again.

We stopped near a canyon with a couple of big rock “tables” for lunch, and shared our rain stories.  The rains had completely moved north and west, leaving a wonderful day for further riding.

Another hour of mild climbing on SR95 brought us to SR275, the turnoff to Natural Bridges National Monument.  I stopped to regroup, and there found a child’s multicolored foam ball on the roadside.  I decided it ought to be re-used as a bike ornament, and thus became a new mojo decoration fastened to the back of my trunk.

Since it was already 4:10pm, Jack and I decided to check out the campsite here, instead of riding on to Blanding.  We could certainly make it there tonight, but we figured, why knock ourselves out?  It had already been an excellent and eventful riding day.

The side road, SR275, rolled 4.5 miles to the national monument, mostly downhill, and we were already ruing the idea of climbing out tomorrow morning.  We stopped at the visitor center and then at the self-serve campsite.  There were only 13 sites, but alas, 12 of them were unoccupied, and only $10 – such a deal.

We picked out a comfortable big site #6 with picnic table and multiple flat spots for tents, situated among stunted “pygmy” pine trees.  Jack called them “bonsai.”  In front was a big flat rock that Jack termed the “drying rock,” because very soon all our wet shoes, socks, and shirts were draped over it, baking in the afternoon sun.

The rains had trashed one of Jack’s ancient riding shoes, and the sole was literally dissolving away from the rest of the shoe.  The cleat seemed securely fastened to Jack’s foot, which was good, but the walking surface was all flopping away.  Several wrappings of duct tape patched things back up, but the shoe’s appearance certainly put Jack one step closer to true hobo status.

Jack set up his tent, and called out, “Butter!” referring to the soft red dirt here.  It was a nice contrast to the hardpan we’d camped on at Hite last night.   We soon settled around the picnic table and broke out our carted-in dinner, ham or cheese sandwiches, mayo, Baked Potato-flavored Pringles, soft drinks, candy.  A busy yellow jacket kept after us while Jack tried in vain to clap it in his hands.  Although primitive, the camp fortunately had fresh water.

Around 7:30PM or so, Jack wanted to sit and continue his book, so I decided to check out the Natural Bridges.  My fear that the observation road loop was downhill from camp was quickly confirmed.  What I did not anticipate is that, once on the road, I realized that it was a one-way loop of more than 9 miles.

The first bridge, called Sipapu, was about 2 miles in.  It was especially nice being at the obervation deck all alone in the twilight.  The bridge, although not very colorful, was certainly a marvel of nature.  I thought about riding backwards to camp on the one-way road, but noticed one or two cars still out here, and resigned myself to the full loop.  It turned out to be quite hilly and steep in spots, but the other two bridges were worthy attractions too, named Kachina and Owachomo respectively.   I returned to camp by 8:30pm – a real nice evening ride.

One thought on “UTCO8 – Natural Bridges”