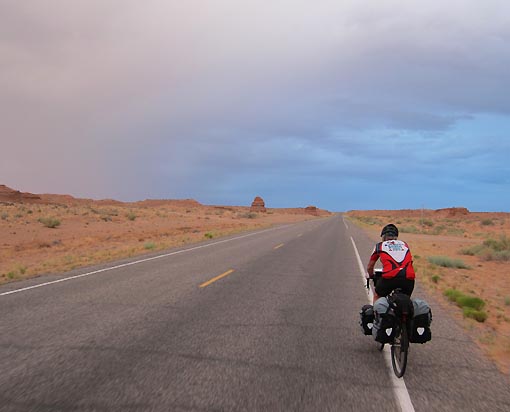 Up by 5:30AM as planned, we gobbled strawberry pop-tarts and coffee for breakfast.  I was a little slow moving this morning while Jack patiently waited.  We headed SSE on SR95 out of Hanksville, directly into a 10 mph headwind and mild ascent.  Time to get in gear, so to speak.

The pre-dawn temperatures were cool and the terrain wide open.  Isolated thundershowers were evident in the distance, and when the sun finally peeked out, our shadows were very long in the orange glow.  A wonderful time to be riding.

It was a long straight stretch, so we stopped at each 10 mile mark to regroup, nibble, and generally collect our wits – I call these “constitutional stops.”  We did some very modest climbing to about 5,000 feet, and got sprinkled on while passing through some rolling hills through small canyons.  The rain felt good.

As we passed the 25 mile mark and SR276, the terrain started getting outrageous.  Red rock formations erupted from the ground, ever taller with each mile.  Soon we were, once again, cruising through a cycling dream world of fantastically huge red spires, columns, walls, caves, and mountains rising up on both sides.  At our 30 mile rest, we stood for a good 20 minutes, just staring around in wonder.

A sign announced Hog Springs Rest Stop, and we decided it would be perfect for lunch, nestled in the midst of the grandeur.  A couple of Harley riders stopped to chat – they were intrigued by our loaded-down bikes – and wished us well.  We found a pavilion and picnic table for a lunch of ham or cheese sandwiches, trail mix, and soft drinks.

A smattering of ants turned into a brand of entertainment when we spread a few bread crumbs around.  A couple of different species apparently started warring with each other over the treasure, while we watched.

We continued down SR95, on our magical mystery tour through the red netherworld. Jack and I had been expecting a rather bland and flat-ish ride down to Lake Powell, and neither of us had expected these insanely beautiful red canyons.  What a treat.  I often slowed my pace down to 6 or 7 mph because the scenery was just too great to speed by.

At the 40 mile mark we were fairly close to the lake itself.  The lovely downhill turned into sets of ups and downs, sometimes near the lake edge and other times passing on top of bluffs.  We cranked up a side hill and stopped at the Hite Overlook, gathering in our first expansive views of Lake Powell, and a direct view of our evening’s campsite on the opposite shoreline about a mile away (and about 5 miles of riding).

A real friendly motorcyclist from Ontario stopped to chat and we exchanged photography duties overlooking the lake.  When he started to leave, we quickly hopped on the bikes and challenged him to a race to the bottom of the hill.  He won, but it was pretty close!

We continued a couple miles due east and north up and around the northern reaches of Lake Powell, including a few fast descents that got us up over 40 mph.  The rollers finally gave way to a bridge crossing the Dirty Devil River.  We stopped to examine the views, which dropped out beneath us many hundreds of feet.  As we watched, a small party of coyotes strolled through on the shoreline far below, then another pack started howling from upstream.    With only a 20” shoulder and raised sidewalk, it occurred to me that almost no other motorists could or would stop here.  Traveling by bicycle – a unique pleasure.

Another mile or so brought a slightly larger bridge crossing the Colorado River itself.  Just before the bridge were signs indicating an aviation runway.  Sure enough, up on the plateau were about 6 small colorful planes with pilots and tourists crowded around them.  As we watched them in wonder, we realized that they were actually watching US in wonder.  As Jack rolled by they called out, “Hey, where are you riding from?” and other typical questions.

From the Colorado River, the road took a brutal 1 mile climb on an estimated 10% grade to reach the side road turnoff to Hite.  Another 4 miles downhill took us to the ranger station, where ranger Melissa directed us to the convenience store and tenting areas, for a mere $7 per person.  Cold Pepsi!  Gotta love it.  We relaxed in the air-conditioned store for about 30 minutes, and I grabbed a frozen strawberry lemonade snack for good measure.

After that, we rolled the remaining ¾ mile down to the water’s edge and a very broad flat area dotted with a few picnic tables.  Melissa had told us we could basically camp anywhere we wanted to, but near a picnic table always seems like a good choice.  We set up, finding the ground covered with a thin layer of crumbled red rock, but often with much more solid red rock immediately beneath.  Pounding of tent stakes was involved.

We explored around for a while, but soon decided that it was too hot to sit here, and so pedaled our way back up the hill to the convenience store.  Over the course of about 2 hours, we laughed and painstakingly made decisions selecting food and drink items for the next two riding days, since we’d be fully on our own.  This included breakfast, lunch, dinner, and road food for two days.  When the process was finished, we had a nice assortment of packages piled on the picnic table, which even included 2 Coronas and a bag of ice for tonight.  $50.

As we checked out, a glance out the window told us the weather had changed.  Big winds had kicked up and clouds had covered the sky.  Our tents!  Both of us had left the flies completely open and sleeping bags unrolled inside!  We packed up our goodies as quickly as possible (although I struggled with the bag of ice) and rolled down the hill.  Big drops of rain were already falling.

I found my tent sideways, nearly flat on the ground.  The stakes had held, but its structural inflatable tubes had collapsed due to the wind loading, and secondarily due to being inflated at 20F warmer temperature.  Inside, both my pillow and the top half of my sleeping bag were soaked.  Jack was in the same boat.

The rains had already died down but the winds kept up at a brisk pace.  I grabbed some rope and tied up the tent tubes, anchoring them to two large rocks.  This worked well against the wind.  Jack and I both soon had our sleeping bags out and draped around our bike frames, which served as a clothesline in the wind.   Hope it all dries out before bed.  I even found about 2 cups of standing water inside the tent floor.  The good old Chamois towel took care of that.  Within an hour or so, we had everything back under control.

We ducked into the tents to let the remainder of the storm pass, then emerged to work up dinner.  The winds had calmed and the temperature stayed lower, making a great evening.  Using the bag of ice, I set up a makeshift ice cooler in one pannier, and those Corona beers tasted pretty dang good.  We discussed how to get our wives out doing something like this with us, and the answer emerged: shopping and golfing.  We’ll have to work on that.

Jack retied to do some reading, so I explored around the shoreline taking photos for another hour or so.  At 9PM, it was still light – but I jumped into the tent to call it a day.  We have a potentially tough ride tomorrow out of the lake canyons, then either to Natural Bridges National Monument or to Blanding, depending on how we feel.