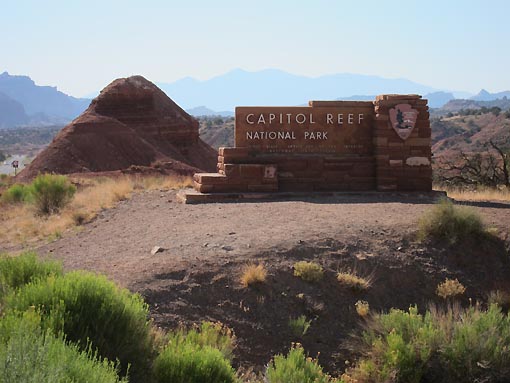 At first we climbed east on SR24, which then turned into some quick descents, with speedy segments of 8% 2 or 3 times.  We encountered an area of chip seal and more downhills, which our Surlys with 35mm tires handled quite well.

At the western edge of Capitol Reef National Park, Jack pulled up with another flat.  Perhaps the chip seal had taken its toll, because he couldn’t otherwise find a cause.  Like his last flat in the Red Canyon area, I marveled at our “luck” in having to fix a flat in such paradise.  The event occurred adjacent to “Twin Rocks,” a pair of humongous red rocks next to each other.   As I paced around the area, I thought it was remarkable how inhospitable the land was, barely sustaining plant life and only the scarcest signs of any other life (one or two lizards and barely any insects).

A very mild descent followed, but what a descent it was!  We passed slowly and effortlessly through Capitol Reef NP, panning through utterly gorgeous towering red formations mile after mile.  Once again, I felt as if in a touring cyclist’s dream – that cycling can get no better than this.  It’s as if I could not pedal slow enough – because I did not want it to end.

After 8 miles we stopped at a tourist station and decided to commence on a hike to a site labeled Hickman’s Bridge.  It was actually a full mile hike up over a bluff, then down into a canyon, not a trivial walk in our bike shoes and in some hot sun.  However, like the hike 2 days ago, it felt good to stretch our legs off the saddle.

On the hike we encountered a fellow named Andrew and his wife from NY, who engaged us in friendly conversation.  They were passing through from the east and excitedly directed us to visit some place with “Mesa” in its name east of here, in Cainesville for a treat called a melon bomb (honeydew melon and jalapeno pepper).

The Hickman bridge was certainly dramatic, painted in orange-y hues against a stunning blue sky.  We shared the shade beneath it with a group of 4 or 5 other hikers, possibly from Israel or elsewhere in the Middle East.

When we returned to the bikes, I was mildly relieved to see that they were still there.  National parks are known areas for thievery, and Jack and I are both lax about locking them up.  Still, I don’t think a 90lb loaded touring bike with clip-in pedals is regarded as a very appealing target, at least here in the US.  Both of us were low on water, but unfortunately the station rest room was a dry one.

We continued eastward on that slight downhill, but now encountered some swirling headwinds.   The amazing landscape continued to roll by with extraordinary surreal views.  Occasionally, the canyon walls closed in to concentrate the speed of the winds.  But all I can remember is being happy, happy, happy.

As we followed the Fremont River downstream, the colors of the national park faded, but the strange and wonderful scenery remained on both sides of the road in drabber colors.  We encountered a construction zone and eventually a one-lane stop where flagmen were conducting alternate waves of cars through.  I asked how far the one-way existed and a foreman emerged, stating it was about 3.1 miles.  Generously, he offered me a lift in the company truck, but I declined – I’d really rather ride it – but I explained that I could only do about 8 mph so they might as well let me through without waiting, because I couldn’t time the passage with the cars.

They let me pass.  The surface was dirt and gravel.  When the lanes squeezed down to a single one, I went a few hundred yards before encountering a big ol’ construction truck head-on in my lane.  The opposite lane was soft gravel and tar, so we waved at each other, both slowed down to a crawl, and very carefully squeezed by each other within the single lane, me staring at his huge wheels as they rolled by only a few inches away.

Fortunately, the single lane section was only a half mile or so, but the closed off section went on for the full 3 miles.  At least this allowed easy passage of the car groups.  I finally reached the other side and stopped to talk with the flagman there and regroup with Jack.  The flagman said he laughed when he saw me coming down the hill a half mile away, wondering, what the heck is that slow moving thing?

Jack and I finally reached Cainesville UT and immediately began looking for water.  The temperatures were really high and we were both almost out.  We passed an empty Rodeway Inn and stopped in to look around.  A single car was out front, but not a soul detected, and the lone Coke machine out front was empty.

Further down SR24, I found a place called Luna Mesa, offering Mexican-American food and proclaiming itself open.  However, its doors were locked and no one was around.  Jack and I found an empty siphon valve out back, presumably for an RV site, and finally filled up our water bottles with warm hose-flavored water.  Hopefully it’s potable, but we had no choice.

Another mile brought us to the Mesa Farm Market, and we stopped to investigate.  A wonderful warm-hearted woman greeted us and offered us chilled homemade lemonade and water, which we practically inhaled.  She sold only a few selected food items, but every one of them was made from fresh ingredients grown or raised onsite.  Talk about the very freshest ingredients!  She had outstanding loaves of bread, various grades of goat cheese, and the most amazing basil pesto I’ve ever tasted.  From these things we created a very fulfilling lunch seated on the covered porch out front.

We ate so much that neither of us had the presence of mind to ask about melon bombs.  But we left very pleased with the stop – this is a unique place.  And with full bottles of clean water.

Sixteen miles eastward led us through interesting lands with occasional strange bland-colored formations.   Otherworldly, grandiose, stark, barren are the adjectives that come to mind.  We passed through areas very popular with ATV’ers.  I couldn’t believe some of the tire tracks high on the sides of mountains.

The hot headwinds took a toll, but at least they helped with evaporationl, and I really enjoyed the ride into Hanksville UT.  I stopped at the Bull Mountain Market to regroup with Jack and downed 2 lemon slushies while waiting.  Man did they taste good.

Jack and I checked out the RV park in town but found it unappealing.  Around a bend in the road we found the Whispering Sands Motel, which beckoned to us with air conditioning and clean sheets.   We just don’t need a hot tent in these temperatures.  The check-in clerk told us the motel thermometer was reading 112F and I could not believe that – it felt much cooler than that.  Still, my iPhone confirmed the temperature as 106F – surprisingly toasty.

For an hour we vegged in the room, then emerged to find dinner.  We walked across the street to Blondie’s Eatery and Gift, which touted “world famous” burgers and milkshakes.  The food, even the milkshake, however, was rather famously sub-par, a disappointment despite our appetites.   At least I scored a big can of Coors Lite next door at the underground convenience store, which was carved inside a mountain.

More serious vegging in the room brought the revived version of the soap “Dallas” on the TV, which I found amusing, with overblown drama at every turn.  Then a couple episodes of the “The Mentalist,” which is a pretty good show and quite funny at times.

We made a quick evening walk again to the underground convenience store for evening nibbles.  Both of us were bit by unidentified insects that itched intensely for a short while – didn’t feel like mosquitoes.

Back in the room, we made a change of plans.  The soaring temperatures, and some sore muscles and butt, have prompted us to rest a day here in Hanksville tomorrow.  Temperatures are forecast to drop at least a little bit within a day or two.   We’ll then plan to break up the longish ride to Blanding into 3 pieces, arriving there July 15.   All of this is aimed at having fun, and not working too hard.  Sounds fine with me.