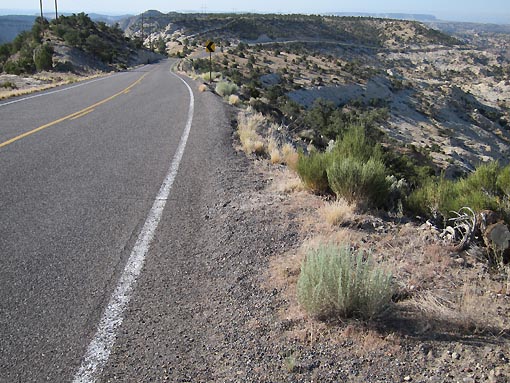 My trusty Thermarest mattress has started leaking, but it’s a very slow leak, requiring only a few puffs throughout a full evening.  At least the soft red dirt was comfortable all by itself.  The stars were stupendous, and I left the tent fly open all night, peering up into the night sky at all hours.

At 7AM, I noticed that Jack was already up and out of the tent.  Immediately I could see that he was looking much better, an immediate relief.   We both talked for a while with a fellow overflow camper, a white-haired senior adventurer from Atlanta who might have passed for Albert Einstein’s brother, affable and intelligent.

With a breakfast target of reaching Boulder, we set out on the road.  Good morning!  Wickedly steep climbing greeted us immediately with no warm-up.  I was reminded of a similar morning last summer climbing out of Diablo Colonial Campground in Washington state (link: http://www.twowheeljournal.net/?p=2869)

This was worse, though.  When we finally reached a plateau, we turned around to see a sign proclaiming what we’d just ridden: 14% NEXT 4 MILES.  Man!  Of course we know that actually means that there are 14% sections in the next 4 miles, but neither of us had ever seen so steep a grade defined on a road sign before.

On our Adventure Cycling maps, there is a section that touts, and warns, of the next section of SR12, called the Hogback.  It describes a 2-lane passage with no shoulder and steep drop-offs on both sides, so we were sort of looking forward to seeing what it was about.    With each passing mile, however, we both continued to look around wondering when the “terror” was going to start.  It never did – passage was very comfortable – much better than other places.  False advertising – what are the folks at AC thinking?

We completed the slow grind uphill into Boulder UT and found Hell’s Backbone Grill.  It is definitely another “crunchy” venue, serving up orange-yellow farm fresh eggs and wonderful coffee.  Jack and I sat outside on a porch surrounded by beautiful garden flowers, water features, and a resident cat for one excellent breakfast.   Service was outstanding – stop here when you go through!

From here, an unforgiving grind up to 9,600 feet, which took a total of about 3 hours.  The thousand feet between 8,000 and 9,000 feet were especially brutal, a non-stop mashing at 8-10% grade.  Still, I really enjoyed the process, stopping occasionally along the way to wipe away the sweat, look for critters, take photos, or simply to gaze at the dense stands of pines, aspens, or birches.  Jack and I both saw numerous deer on the way up – at one point a group of six or more of them grazing by the roadside.

At the Homestead overlook Jack and I regrouped.  A variety of RV tourists came by and visited pleasantly with us, along with a variety of pesky but unaggressive black flies, who were not quite as pleasant.  From the overlook, we encountered a series of scoopy hills and false summits that haltingly continued our climb.

Donning our rain jackets, we finally tucked into the now dearly prepaid downhill.  One and a half miles descended at 10% grade, which I found downright scary.  Jack, on the other hand, relishes such drops and soared out in front of me.

At one point during the fast descent, I glanced at my speedometer to read 0.0 mph.  Wah?  Was it broken?  Out of batteries?  Had I lost the magnet?  As I continued the rapid descent a hypothesis dawned on me.   Perhaps the high wheel RPM had displaced the magnet out radially by centrifugal force, and now it was no longer passing by the sensor.  I stopped and slid the magnet back inward a smidge.  Sure enough – that fixed it.

We continued down a terrific descent through 7,000 feet, encountering some “big ol’ fat” rain.  For unknown reasons, I really like riding in the rain like this (when it isn’t a day-long thing).   The gusty winds kicked us around a little bit, but it was all quite fun.  Nearing the bottom, approaching the microscopic town of Grover UT, the road yielded one last steep but straight descent.  Without pedaling, my cyclometer crept up to 48 mph, a new personal speed record for me on any bike.  Jack hit an even more impressive 52 mph – now THAT is moving, especially so on a loaded touring bike!

The rains quickly stopped and the sun heated things up in a hurry.  Ten hot miles brought us due north, leaving the pines behind and replacing them with stately red rock formations.   I started getting those OMG moments again.  When those are happening I am left wondering at how lucky I am to be pedaling in such splendor.

We hit the intersection of SR12 and SR24, which marks the eastward end of SR12.  We’d traveled its entire length.  The town of Torrey UT sits a mile or so west of here, so I pulled into a convenience store and regrouped with Jack to decide our next move, downing a lovely quart of chocolate milk (like nectar!).

With a Subway next door, a Day’s Inn beside that, and 95F outside, the executive decision was easy.  Let’s camp at the Day’s Inn tonight.   Relaxing on the motel bed, I mused about the day’s ride.  This was one of the best riding days I’ve ever had.  Challenging, ultra scenic and varied, safe and comfortable passage, weather extremes, serenely satisfying.

Follow up these positive thoughts with a foot-long steak and cheese, the All-Star game, and serious relaxation.  Despite the effort and exposure climbing back to altitude today (9,600 feet just past Homestead overlook), Jack was still feeling good, albeit tentatively.  It was really good to have him “back.”

One thought on “UTCO4 – Speed Records”