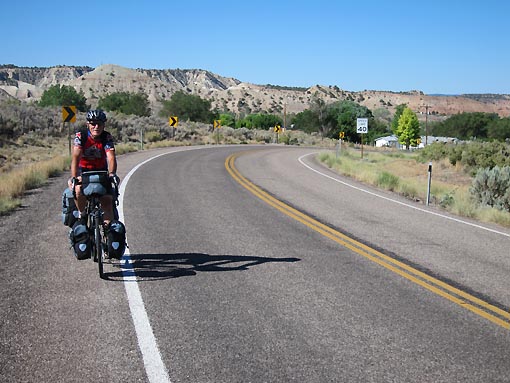 Wonderful low sleeping temperature again last night, maybe down into the mid-50s.   As it warmed up in the morning, we noticed the buzzards one by one flapping out onto a nearby bluff, landing on small trees, and spreading their wings in the morning sun.

We rolled to Clarke’s again for breakfast, which they executed in much better fashion than dinner.  Pancakes were bland, but the eggs were good and sausage tasty and peppery.  Jack was still feeling poorly, but was hanging on trying to fight through it.

Continuing east on SR12, we enjoyed a pretty descent through the tiny burgs of Cannonville and Henrieville, easy going for 8 miles.  We ran into a husband and wife cross-country tandem, with BOB trailer in tow, headed west.   They spoke of some steep climbing for us ahead.

A moderate climb out of Henrieville soon turned into some whopping 14% grade sections as we approached the area called “The Blues.”  These were the steepest grades I’d ever climbed, with or without a loaded bike.

At the summit at 7600 ft, I rested and nibbled raisins.  A Harley rider gave me a big wave and thumbs up, and did so for Jack, too.  The Blues is a gorgeous spot with intricate rock formations, albeit without the brilliant colors of other sites.

Jack and I then started a terrific 18 mile descent, dodging a dark rain cell in the process.  The scenery was again outstanding, prompting more utterances of “pinch me.”    Still inside a cyclist’s dream world.  Curiously, Jack’s altitude symptoms seemed to diminish during his climbing efforts, but they flared back up on the long downhill, with nausea and fatigue setting in again.  Weird – you’d think that he’d feel worse during exertion.

We reached Escalante UT at 5800 feet and stopped for lunch at the Circle D Restaurant.  Service was non-existent for 15 minutes.  We finally received drinks and made an order, then settled in for further wait.  Ant-cy, I hopped up to scout other restaurants in town and found one down the road that promised faster food.  When I returned, however, our food was apparently in process so we settled in for the wait.  Besides, Jack’s continued discomfort warranted plenty of rest.

My sandwich was very good – chicken, applewood bacon, chipotle mayo, tomatoes, and lettuce.  Along with fries and about 4 Cokes.  Worth the wait, almost.   Jack remained wiped-out and nauseous, but gamely fought through it and ate a lunch, knowing he needed to refuel.

At the edge of Escalante, we encountered perhaps the “crunchiest” store I’ve ever been in, and that includes that extra-crunchy place in Mazama WA last summer.  (link: http://www.twowheeljournal.net/?p=2869)  Inside the Escalante Mercantile & Natural Grocery, we each picked up a big bag of organic “Woodstock” trail mix that would serve us both throughout the trip.  In fact, I think every item in the store was “organic.”  Very friendly staff – good stop.

A 9-10 mile slow climb greeted us out of Escalante, reaching 6,200 feet at the top.  This section of SR12 is called the “Million Dollar Road,” and aptly so.  It is carved into some remarkably beautiful and rugged land.

We stopped at an overlook and conversed with some Harley riders.  Then, with fantastic rock formations rising all around, we descended through a set of amazing hairpin turns, dropping like stones.  I actually stopped to take a few pictures, but hated to brake so hard.  Another short climb followed, then another very steep descent into the canyons of the Escalante River.

Decelerating hard to stop at an overlook, the pitch of my brakes suddenly changed drastically.  When I stopped, I felt my rims and they were extremely hot – I’d actually started to melt the surface of my brake pads.  I only hoped that melting wouldn’t translate onto the beads of my tires.  I know that melted brake pads can be permanently ruined, but fortunately I’d caught this very early, and so knew the damaged surface would quickly wear away.

After waiting for the rims to cool, we continued down more wicked-cool hairpin turns and rising red rock canyons, finally crossing the Escalante River.  The next ¾ mile were utterly dreamlike, through adjacent mighty walls of red rock.  I stopped with the camera to take several “million dollar” shots of Jack riding through this wonderland.  Unbelievable stuff – does bicycle touring get better?

Since 5PM was approaching, we decided to check out the campsite at nearby Calf’s Creek, a USFS site, instead of attempting the remaining 14 miles into Boulder.   We rolled around the place but unfortunately found every campsite occupied.  Jack eventually engaged with a settled camper and gained permission for us to tent in the perimeter of their site.  Simultaneously, I found a park ranger who told us we could tent within an “overflow” site behind the rest room building.

The overflow site was actually huge, a big flat area of coarse red dust that looked more like a playground than a campsite, with the river flowing only 50 yards away.  A couple pavilions were there, along with picnic tables – perfect.  And only $7 – a wonderful bargain, especially given the beauty of the red canyon walls around us.

Once again, when Jack stopped laboring on the bike, his nausea and fatigue returned with a vengeance.  He put his head down on the picnic table and simply endured.  I know he felt terrible and admired his grit in quietly fighting through it.  We read on our iPhones that the only true solution to altitude symptoms is to descend (although some relief can be realized through extended O2 or hyperbaric chamber).  Here at 5200 feet, I was again hoping that a night here would improve things, but then, I’d thought the same thing yesterday in Tropic.  It started to creep into my mind that we might just have to get Jack out of here somehow, other than by bike, and give him a day or two rest at lower elevation.

We eventually set up our tents, and both of us found half a dozen earwigs had stowed a ride with us, apparently rolled up between the tent footprints and floors from the yard in Tropic.  Buzzards and earwigs…

The campground had 4 big hummingbird feeders set up, and a raucous collection of hummers constantly buzzed around them.  One station was empty, and so not in too much demand (although the birds continually checked it).  Another was full and open for anyone, unprotected per se, and saw the most action.  The other two were viciously protected by single birds, “kings,” who would deftly repel all comers.  The skill involved in this was mesmerizing to watch.  A half dozen birds would aggressively approach, and one single bird could defy them all in the blink of an eye.

Jack hit the tent very early, and I spent some of the evening looking at our riding plan, nibbling on trail mix and candy for dinner.   In the next few days, we would encounter a long 150 mile stretch through Glen Canyon which contained only 1 location for water and food.  Phasing the ride and stops accordingly was on my mind.  The most logical stop before this stretch is in Hanksville UT, but that was 100 miles away with more than 5,000 feet of climbing – I certainly was unsure if we wanted to attempt that tomorrow.   Best to simply see what the day brings.