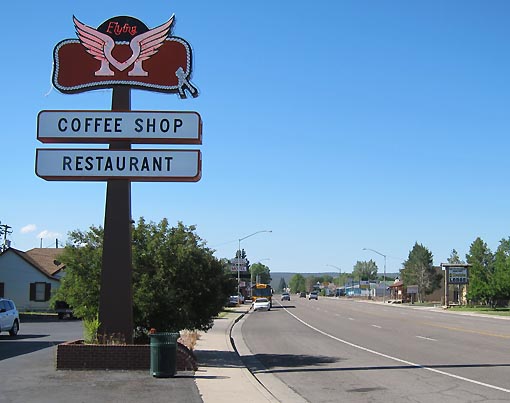 A late morning awakening to a full bladder.  I can typically make it through the entire evening without leaving my tent, but it is always a delicate balancing act between proper hydration and over-doing it.

Temps last night dropped beautifully, down into the 40s.  It’s perfect sleeping weather when you can rest warm in your sleeping bag, but still breathe the cold crisp air.   My tent site selection had not been ideal, since its surface had me constantly rolling into the side of my tent.  I finally resorted to placing my camp pillow under one side of my body, which worked fine.

In the morning, it warmed up quickly.  We talked at some length with our friendly neighbor again, learning that her family was vacationing from northern Italy, visiting the area national parks.

Out onto the bikes and around the lake.  A few mild ascents presented themselves, but mostly it was one fun 20 mile downhill into the town of Panguitch.  There was an especially steep 1 mile drop just before town that got our adrenaline pumping.

Through town, we finally found the Flying M Coffee Shop and Restaurant, and were happy they were operating on this Sunday morning.  I ordered pancakes and eggs, and decided on a slab of ham, too.  When the ham arrived, it was a 12” diameter cut about 1/3” thick, enough for 4 people!

Out of Panguitch, we took SR89 eastward, finally reaching the start of “All-American Scenic By-way” SR12.  A three mile 1-2% climb took us to the beginning of the Red Canyon area, with both temperatures and headwinds on the rise.  Here we were to find a bicycle trail heading eastward, but one of Jack’s tires decided to go flat beforehand.

He found the culprit – a tiny steel wire from a radial tire remnant – and fixed the tire without issue.  With the red rocks and pine trees surrounding us, we certainly couldn’t complain about taking a stop here.

We found the bicycle trail easily enough and continued our climb for another 3 miles or so.  The effort of the climb, however, was completely overshadowed by the awe at the scenery around us.  The word “ridiculous” kept coming to mind.  Stunning and magnificent are pretty trite, but they came to mind, too.  Cycling doesn’t get much better than this, unless perhaps it’s downhill.

We eventually reached a “summit” around 7800 feet out on a wide open plateau.  Cross and headwinds became a riding factor.  We stopped briefly at a store, then started a mild descent.  It soon became a ripping descent as we entered the boundaries for Bryce Canyon National Park.

Unfortunately, our route bypassed the road to the main park attractions (Sunset Point hoodoos, etc.) but instead descended through unbelievable formations that kept our heads constantly turning, despite our 35 mph speeds.

We both stopped at a visitor’s point announcing Mossy Cave and Waterfall, and decided to hike in and check it out. It was a short hike, about ½ mile back, to the cave.  The cave itself was nothing to write home about – although in the winter it apparently can host some very neat ice formations.   But it was a needed break off the bikes, a way to stretch out our legs, and a great opportunity to take some photographs of more ridiculous landscape.  Pinch me.

From the park, we continued our ripping descent into the small town of Tropic UT.  By the way, the stretch of SR12 eastward out of the park is very marginal for bikes – zero shoulder and traffic’d with tourists.  We decided to camp in Tropic, since there were several restaurant choices.  At the far edge of town, we found the Bryce Pioneer Village, which was both a motel and RV park.  They rented us a piece of grass for $12.  In general we dislike RV parks for camping, but the yard for tenting appeared uncrowded, quiet, and it comes with nearby showers and rest room.

Jack continued to feel bad, with that constant nausea that wouldn’t go away.  Tropic rests at 6300 feet, so I’m hoping the evening here will improve things for him.  We selected Clarke’s Restaurant for dinner, where Jack forced himself to eat.  Dinner food here is definitely lackluster, but the service was pleasant enough.

Following dinner, Jack left for the tent, while I perused through the aisles of the adjacent grocery store for dessert.  I recognized our server coming down one aisle, and she grinned and held out a credit card for me – Jack’s.  Her kindness was much appreciated.  And I knew Jack must be feeling pretty bad to have forgotten it.  It made me remember when this same thing had happened to me in Fort Thompson, SD (link: http://www.twowheeljournal.net/?p=3578) last summer.

At 7pm, we sat around the picnic tables and waited for the sun to set behind a tree and thus off the surfaces of our tents.  Roosters were crowing from a nearby yard.

A buzzard swooped into the top of a towering nearby cottonwood tree.  Then another.  Then another.  Pretty soon a dozen buzzards were roosting, shifting positions, and settling in for the night.  It was tough to get a photo of them from the ground, but it was fun trying for an hour or so.

I broke out my new earphones and listened to Todd’s Healing album tonight before sleep.  The familiarity and nostalgic charm of that music deeply soothed my soul in this strange place.