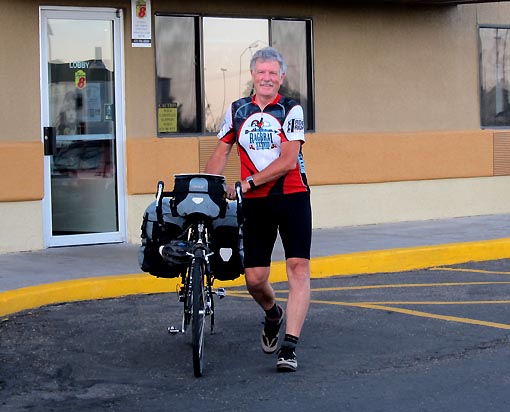 My darling Linda stayed and joined us for breakfast at Main Street Grill.  I use the word “darling” passionately, of course, but in this case I use it actively as well.  To arrive at this starting point, Linda has driven us all the way up to Cedar City, and will drive herself back today.  And then she’ll repeat the process some 18 days from today, to an even further finishing point in Colorado.  A darling.

After casting farewells, Jack and I were suddenly and officially on the road, with possibly the toughest climb directly in front of us.  Wait – time to stop for supplies.  We ditched into Lin’s grocery and scored water, raisins, soft drinks, etc., trying to fuel the climb without unnecessarily lugging weight up the mountain.

I felt great starting out east on SR14.  Still, my immediate preoccupation was to stay in “knee preservation” mode.   My knees are suspect – genetically ready to start twinging at any moment.  (Those knees will probably forever keep my Tour de France dreams at bay – hahaha.)  On a long tour with a heavy bike and lots of climbing, it seemed especially important to take precautions.

We followed a stream on our right on a fairly mild 2% grade for about 6 miles.   It then got steeper, around 5% or 6%.  I continued to feel pretty good, but Jack was lingering, so I’d stop and regroup regularly.  Pretty soon, the regrouping occurred every mile.  As we reached the range of 8000 feet or so, some black flies started being a nuisance, hovering along in our wakes and taking bites even as we rode.

Jack’s pace slowed considerably.   A fraction of this (for both of us) was undertraining, but we soon both realized that something else was going on.  I’d ride a mile, then stop and wait.  Fifteen minutes later he’d appear, then have to rest another 15 minutes before clipping back in.  Deep fatigue and a constant mild nausea were setting in, too.  Signs of altitude sickness -dangit.

Fifteen miles of non-stop climbing took us to about 9500 feet and onto SR148 headed north.  Finally we were on brand new roads.  Jack was struggling and not complaining about it.  I think maybe he felt so bad he didn’t have the energy to complain.

I reached the Cedar Break National Monument sign and stopped for another regroup.  This was the first cycling I’d ever done above 10,000 feet, and took pictures of an altitude app on my new iPhone to capture the moment.  When Jack finally arrived he was feeling mighty puny and completely out of water.  He lay prone on the sign pedestal for many minutes and I thought he might just go to sleep.

A mile later we spied a Cedar Break National Monument ranger station and parking lot.  We almost cruised by it, but Jack decided to go in and investigate for a water fountain.  We found it straight away and were grateful for it.  Lots of friendly tourists stopped us both and asked about our travels, assuming we’d come from far away.  “Oh, well, we just started this morning…”  Still, it reminded us of all the friendly folks we’d met last year, and how touring cyclists are often met with smiles and a measure of appreciation.

Signs indicated that we’d have to pay to visit the park site, but no one seemed to be collecting, despite many rangers on duty.  We strolled out to the vista point, and, well, we were completely astonished.   Using written adjectives to describe this wonder of nature is wholly inadequate, and so are the photographs.  Just imagine peering down into a 4,000 foot deep exquisitely shaped canyon fantasyland in every shade of red, brown, orange, and white you can imagine.

How could we have dreamed of rolling by this place?

A few more rolling hills took us to additional vistas – phenomenal.  Climbing some of the rollers at altitude was definitely noticeable.  We reached a summit altitude of about 10,500 feet.  After 85F and 90F down at Cedar City, we were enjoying a perfect 60F here at the top.  Both of us put on arm warmers for the descent.

Down, down we flew, then eastward on SR143 for more descent.  It was a GREAT long downhill, more than 13 miles to Panguitch Lake where we decided to camp for the night.  Jack hit 40 mph on this descent, pretty fast on a touring bike.

We found a nice campsite for $15, and our neighboring campers immediately recognized us from the Cedar Breaks vista points.  A very friendly lady came over to greet us and welcome us to the neighborhood.  We set up tents under a pine tree, overlooking pieces of the lake and a utility pond – a good comfortable quiet site.

Where to eat?  Burger Barn across the street didn’t sound good.  As a nimble vegetarian, Jack can manage almost anywhere, but I’m sure Burger Barn wouldn’t offer much.  Armed with some local advice about pasta dishes, we tried for more than a half hour to find the Bear Paw Restaurant, rolling through back roads around the lake.   When we finally realized where it was, a couple miles further, we decided it was too far, and instead settled on a place called Lakeside Dining, which was closer to camp.

It was sort of a quiet meal.  I downed a local brew (Zion Canyon India Pale Ale – yummy), mushroom burger, fries, and steamed veggies.  We’d descended only to about 8300 feet and Jack still definitely felt lousy and nauseous, but knew he had to consume calories for the tasks ahead.   His bottom was pretty sore, too, but the altitude stuff was more concerning.  For reference, we both took resting pulse rates while at the table.  Both read much higher than normal, his at 114bpm (normal in the 50s or 60s) and mine at 100bpm (normal in the 70s).

We returned to the tents in the quiet woods.  Temp was about 70F, the lake waters shimmered below us.