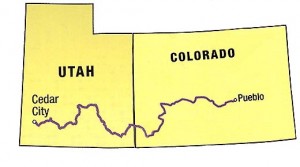 Jesse and I have continued our Sunday Breakfast Club rides to Jim’s Coney Island Cafe in Tempe. Our regular Tuesday group has since moved there too. The food is decent, and the atmosphere and service are excellent. Any Sunday or Tuesday morning, you might catch one or more of us there – c’mon out and join us.

I need to stay on the bike. Jack and I corresponded sporadically throughout the spring, talking about, but not getting serious about, a summer tour. Well, we’ve finally dared each other into it, although neither of us needed much prodding.

From there we’ll continue east into Colorado across the Rockies, with a planned finish in Pueblo CO. This route will take us through Montrose, Telluride, and Gunnison. We’ll get up above 11,000 feet in one spot.

We’ll follow Adventure Cycling’s Western Express Route, segments 3 and 4. Last year we found these maps detailed and well designed, albeit often outdated. We’ll supplement the maps with smartphone apps. The one I have is called Oh Ranger! – a park finder that can show you where the nearest place to camp is. We’ll see how it works.

Obviously, mountain climbing WILL be involved. I’m undertrained for that. I’ve been riding flat terrain most of the winter and spring, and on an unloaded bike no less. Jack is probably in the same place. Therefore, along with all our gear, we’ll bring plenty of patience. My guess is that the scenery will deserve it anyway.