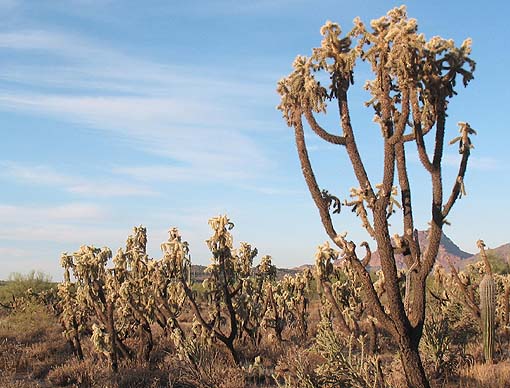 After a round of golf at Orange Tree yesterday, my friend Terry pointed out a very popular breakfast place there on Shea Boulevard, so Jesse and I decided to give it a try.

Once again, I used McKellips for my crossing west, and the Greenbelt north through Scottsdale.  I’m starting to tire of the Greenbelt riding, due to pedestrian traffic, and due to the bump-bump-bump of a sidewalk seam every 8 feet, but in the early morning it is still a very nice ride.  This time I crossed through Silverado golf course, too, which is quite beautiful this time of year.

I got a little bit lost approaching Shea, as the greenbelt went east when I wanted to go west.   But I think my compass was working well, because I followed my Google map almost perfectly.

Arriving 30 minutes early, I found Butterfield’s packed, with 2 dozen people camped outside and more inside.  That worked out fine, because our table was ready just minutes after Jesse’s arrival.  Both of us got the French toast – some really tasty stuff.    Once again, we discussed our golf games and politics.  I am working on a political rallying song and so bent Jesse’s ears with some of the lyrics.  Likewise, he laid some Rod Stewart lyrics on me.

For something different, I tried returning south using alternatives, but safety begs cyclists to use the Greenbelt.   This time I took it all the way to Tempe.  In fact, I missed the turn onto the Scottsdale Road bridge, and had to follow Tempe Town Lake all the way to the Mill Avenue bridge then south, before finally turning east.  No worries – a great day to be riding.