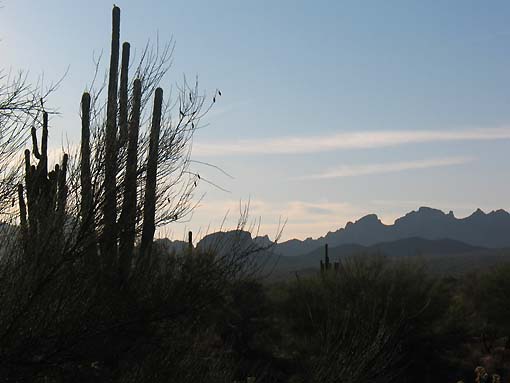 Jesse and I have modified our Sunday riding plans to start meeting at various breakfast venues in Scottsdale and Tempe.    This gives me a chance to explore the crossings between Mesa and Scottsdale, as well as the northbound options into Scottsdale.

Today’s  plan was to meet at the Breakfast Club on Scottsdale Road.  From Country Club Road in Mesa, I took McKellips due west, but ran immediately into a Road Closed sign at the river.  Backtracked, went north on Country Club to McDowell, and found two patrolmen barricading that way, too.  I stopped to talk with one.

“Hey you’ve got all the passages blocked.  I need to go to Scottsdale and I can’t take the 202.”  I then saw that there was some kind of bicycle race going on.

“Yeah, you should continue north up the Beeline, then take one of the routes west,” he said.

“You mean west across the reservation?” (I know about the dog ambushes there.)

“Yes.  You’re on the reservation now.”

What was strange is that heading north, I saw that nearly all the racing cyclists were on time trial bikes.  Stranger still is that, during the 3/4 mile roll north, I passed dozens of them, and this on my good old commuter Trek.  I am still wondering what kind of race it was – why would dozens of entrants on time trial bikes be plodding along the course at 14 mph? (Leave a comment and let me know.)

Found Oak Street and headed west, straight across the reservation.  My expectations turned into reality when the dogs started in on me. The first four encounters, I easily outran tired old dogs, but on the fifth one, three dogs anticipated me coming and ran out snarling way ahead of me.  As I approached, one of them turned really frantic, you know, lips curling and teeth bared.  I dismounted, all the while crooning, “Calm down, you don’t want any part of me…” and continued walking slowly on the opposite side of my bike.    The dogs’ owner was outside, and just slowly looked up, then back down, without a word.

In Scottsdale, I enjoyed my first riding on the Indian Bend wash greenbelt.  Funny that I have lived so long in the Valley and never ridden there.

Jesse and I met at Breakfast Club on Scottsdale Road.  Touristy with long wait, but good food, and good people watching.  To avoid the reservation on the return, I went all the way south to Rio Salado before turning back east.  49 miles total.