Yet another year helping out with the Casa Grande Century ride – held January 8, 2012.  This ride is one of Phoenix Metro Bicycle Club’s biggest yearly events, and accordingly is one of its more important fund raisers.  I’ve decided that this was my final year working on the organizing committee, for a while at least.  Time for someone else to step up.

Helping out with the ride is quite a bit of work, and yet, when I really think about it, such involvement (and anything similar, like serving as an officer) is one of the truest forms of philanthropy around.  I’m not trying to toot a horn here, but this is direct volunteerism that benefits and improves the community – it doesn’t get much more efficient than that.

I decided to post a few pointers for my successor.

Documents: This year the event was conducted over the same route as last year, simplifying the preparation of documents and markers.  In mid-November, I updated an advertisement brochure for 2012, and also updated rider map and cue sheets with new information (new dates, contacts and phone numbers for the most part).  Jules Moore, the ride director, helped me review these documents for release.  Once finalized, the documents were converted (from Excel and Powerpoint) into pdf documents and mailed to Jules for printing.

Example of the pamphlet is here:  CGCentury2012 Brochure
For the cue sheet and map you’ll have to sign up for the ride next year 🙂

Markers: Mid-December I started preparing all the markers for this year’s course.  As usual, both larger wooden A-frame markers and smaller cardboard markers were used.

Terminology: Although I still laugh and wink about it, we decided a couple years ago to abandoned use of the word “sign.”  It seems that the state, if asked about it, will expressly forbid the use of signs for an event, unless an expensive and lengthy special event permit is pursued.  By using markers (as opposed to signs), by keeping them small and close to the ground, by deploying them quickly in the morning and by completely cleaning them up by sundown, our markers thus fly beneath the radar screen of most John Q Law enforcers, at least I should hope so.  It’s my understanding that this works much in the same way that garage sale signs are tolerated.

Cardboard Markers: Despite our efforts, every year a few cardboard markers go missing, either run over, blown away, or never picked up.   So, following an inventory, the preparation usually involves reconstructing a handful of them from scratch.

I’ll document how these are constructed for future reference, although the procedure is fairly simple:

These markers are placed at (or actually just prior to) turns throughout the course.  In the past, a number of markers have also provided reference distance information or provided a series of “Burma shave” quips for riders.

It would of course be ideal to have 3 or 4 markers for every turn, but alas, the CGC course contains some 50 or 60 turns in it.  The effort to create and especially store 90 markers versus 360 markers is a big difference, and in the end, it was decided that 1 marker per turn would have to suffice.

In the past, we’ve considered the use of water-soluable chalk, and it still represents an option.  I believe the cardboard markers are more visible, but the chalk can more easily provide multiple indicators for each turn.   It’s a lot easier to store chalk, too.  A trade-off.

In the past, we’ve also considered the use of RouteArrows, small colored paper arrows with contact adhesive on the back, but decided against them.  Please see a writeup about them at http://www.twowheeljournal.net/?p=1960

The cardboard markers were never made for permanent use, but so far the original set has lasted through 4 years worth of CGC events (with a few replacements as noted).  Both the transparency and the primer seem to semi-seal the cardboard from light rain, although we’ve never subjected them to a full rainy day.  Note: I did pick up one after 2 months of inadvertent exposure in 2010, including lots of winter rain.  The marker was a little crusty but even then still useable.

Note that the transparencies can be easily peeled off the marker face and replaced with a new message (using a new transparency and new application of adhesive).

Each cardboard marker is weighted down with a good sized rock, maybe slightly larger than a softball.  These rocks should be collected prior to event day.

Wooden Markers: The other markers we use are larger wooden A-frames. These are constructed of 2’ x 2’ pieces of thin plywood, primed and painted similarly to the cardboard markers (same paint, although I used 2 coats of primer and 2 coats of yellow). These markers are further painted permanently with “PMBC” and a set of non-specific arrows (plus a few words like “Registration” or “Luggage”) to be used year round for any club event ride. I used a gloss black enamel and artist’s paintbrush for the lettering. Anyway, each year, these markers typically require a good hosing off, and sometimes some paint touch-up, following a year’s worth of abuse in the storage shed and the backs of trucks.

Here is a full set of markers ready to go before the event: 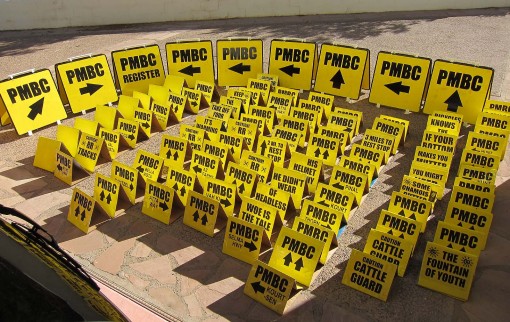 Deployment: Each marker is numbered and has a specific location.   Typically I’ve used the A-frames at Registration, at the turn-off between the Century Route and shorter routes, and at each Rest Stop.

In the past, we’ve used a “marker map” and “marker cue sheet” for each deployment team, giving a specific numbered list and absolute mileage away from the Start Point for each marker.  When the markers have messages with absolute distances (i.e. “89 miles to go”), this becomes important.

Exact placement of the turn markers is a judgment call.  You want the marker to be seen well prior to the need to turn, and thus it should precede intersections by 100-200 feet.  Markers should similarly precede the start of lefthand turn lanes.

Some markers are used to tell riders to continue straight through an intersection.  In many of those cases, it is clearer to place the marker immediately AFTER the intersection so that the intention is clear.

Deployment Team and Timing: Deployment instructions pertain to the existing CGC route – a new route would likely involve different methods and timings. On event day, the marker team meets about 90 minutes prior to the event start time.   Since the CGC is a loop 100 mile course, deployers are split up into 2 teams, one for the eastern leg of the course and one for the western leg.   Markers and rocks are divided.  It seems to work best to have 2 volunteers and one vehicle for each team.

No later than one hour prior to start, both teams commence onto the course, deploying markers as they go.  Obviously, you want both teams to stay ahead of all riders.  Budget about an hour for each 25 miles of route.  Thus, it takes about 2 hours for the western and eastern teams to meet in the middle of a 100-mile loop course.

For the CGC, the western team must deploy markers on both sides of the road, to accommodate two shorter out-and-back routes.  For this reason, it is planned out that the eastern team covers about 57 miles of route while the western team only covers about 43 miles (with approximately equal number of markers).

Cleanup: For the existing CGC route, marker cleanup on the century route can begin about noon.  By waiting until then, a team can make a full eastern leg circuit from the Start Point and go about 70 miles without running into the backend of the century riders.  Every A-frame, cardboard marker and its rock should be removed.

Unfortunately, cleanup of the remaining 30 miles of markers takes a while.  The last rider will typically make it to the Finish around 6:15PM.  Only two volunteers need stay for this chore.

Storage: In the past, the cardboard markers have been stored in plastic garbage bags, 8 per bag fitted in like wedges of pie, then stacked in the storage shed.  These can be taken to the shed immediately following the event or some later day.  Note that the club’s Mining Country Challenge is typically in early March, so you’ll want to get the markers (all the A-frames at least) back to the shed prior to that.

CGC 2012: This year’s event, held January 8, 2012, went very well although I never heard how many participated.  Still, I made my first real mistake this year.  After preparing all the markers, I inadvertently left two garbage bags of cardboard markers off the truck, and we had to mark the course without them.  Fortunately, the missing markers pertained only to the 1st 20 miles of the century route, and from then on the course was fully marked.  Riders were advised of this at registration; no one got lost, no one complained about it.  That I heard of anyway, and despite my embarrassment.

My friend Jesse, my son John, and his friend Colin volunteered in working a very long day on the markers this year.  I speak for the entire Phoenix Metro Bicycle Club in expressing thanks for their contributions.

One thought on “CG Century 2012 Markers”