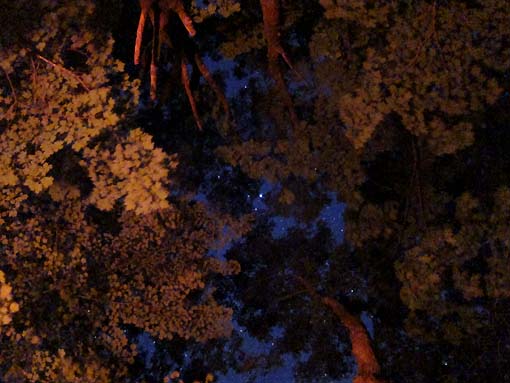 Once again, excellent stars last night, although somewhat blocked by trees.  I took this photograph last night aimed straight up, with the underside of the leaves lit by the flicker of our fire.

Roger took off early this morning, heading for Augusta, and we said our goodbyes.   Using last night’s coals, I started up a small campfire again and Jack and I moved especially slowly packing up gear, enjoying the site, taking our time in the filtered morning sunshine.

We finally rolled out onto US1 northward, looking for breakfast.  Our AC maps indicated that nearby Lincolnville ME and Northport ME had restaurants, but we soon realized that these were generally fine dining establishments or B&Bs otherwise not open for public breakfast.  After 15 miles or so we came upon a place called Family Tradition Restaurant, which served breakfast all day.  Perfect!

I’ve said I would hesitantly blog further about food, but these pancakes win the prize for largest.  Bigger than Kimmie’s.  Not in diameter, although these were only slightly smaller than the plate.  But each one was at least an inch thick!  It was like eating layers of a birthday cake.  I couldn’t make it through two of them but left only a small portion, and probably used a pint of syrup.

Gorgeous weather today but a stiff north wind played against our continued ride to Belfast ME.  We stopped at the bike shop there and I bought a replacement spare spoke, even though at this point I doubt I’ll need it.  Still, “any excuse to stop,” and we enjoyed looking around the town.   Belfast is wrapped around a knob of Penobscot Bay, and it gave us the true feeling of being at the ocean, with lots of sailboats and a coastal feel.  Our route included a pedestrian bridge with good views over the water.

Jack and I both began to encounter other cyclists.  A big group of 40 cyclists was in the process of riding from Portland ME to Bar Harbor ME, a supported tour.  Their itinerary had been delayed by a day due to Irene, and so they were arriving in Bar Harbor today by a combination of bike and bus.   It was a lot of fun talking with them as we rode, though it was a bit of challenge to keep up with them on our loaded rigs.   Our on-and-off conversations made the miles go by quickly, and we sailed another 15 miles up hilly US1 through Searsport ME and Stockton Springs ME.

Jack and I regrouped just outside Bucksport ME at an overlook to an impressive cable-stayed style bridge called the Penobscot Narrows Bridge.  We were told it is one of only three such bridges in the world.  Riding over it was interesting as well, since the roadbed has no structure around it, only the cabled trusses on one side, and it afforded great views down the Penobscot River.

We stopped on Verona Island for snacks, then plodded onward through Bucksport ME, crossing into Orland ME.  We were looking for a campsite on the AC maps called Whispering Pines, located 2 miles east of East Orland.  While climbing several of the hills, I started getting dizzy, due precisely to dehydration.   I think that massive portion of pancakes was requiring more water than I’d consumed.   Jack supplied me some of his water since my bottles were empty, and onward we went.

When we got to the campground, we found it closed down.  Some of the RV sites were still there and numbered, but the buildings nearby appeared to be private residences.  We considered a) stealth camping here, b) retracing to a different campground we’d seen, or c) checking out the Pine Shores Motel we’d passed.  We decided to go for option c to at least ask about the campground, although I knew I’d seen a “Closed” sign on the motel office door.

A nice lady greeted us, told us the campground was closed down, but offered a double room for $55.  The room was fine and we took it, noting that this act officially retired our tents for the tour.  I’m glad that our last camping night was at a good campsite like last night’s Camden Hills State Park.  Hey, the tents were even dry.

After 43 miles today, we’ve been in the room now about 6 hours, have watched one of two channels (CBS or PBS) on the the 12” TV, napped, showered, and nibbled at snacks.  Neither of us wants dinner tonight.  For me, those pancakes were just too much.  Bar Harbor is only about 40 miles away, which will hopefully be a pleasant ride tomorrow.  Both of us are excited and a little sad to be reaching our goal.  I am happy knowing that Linda is up in Bar Harbor right now waiting for us.

One thought on “RA93: Almost There”