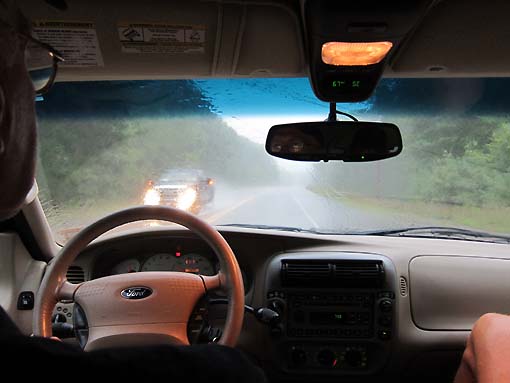 Periodic heavy rains greeted us this morning as we all (except for Roger and Jack) piled in to Frank’s car and rode off  in search of breakfast.  We soon piled in to Danielle’s Sebago Diner and enjoyed an excellent breakfast.  I hate to say it, but I’m definitely addicted to caffeine again after this tour, and getting my morning fix is starting to feel pretty good.  We also hit the WalMart for supplemental food since many of the guys plan to stay at Frank’s house for 4 or 5 days more.

Back at the house, we settled in to the tube again, catching some track and field, and eventually finding coverage of the final stage of the pro cycling event in Colorado.  The house’s hot water heater needed a repair, and so I and others took turns with a cold shower.   And I’m talking so deeply cold that your feet go numb.

Around 1PM or 2PM, the winds were really picking up outside.  I spent much of this time working on photographs for a presentation on the tour that Jack and I are planning.  And then…bink!  The power went out.  No TV, no lights.  Even the toilet wouldn’t flush since it relied on an electric pump.

The seven of us sat around and made the best of it for the rest of the day, eating, reading, fiddling with PCs or iPhones (as batteries permitted) and otherwise talking about aspects of the tour.  Irene arrived, rains pounded,  winds continued to howl, and big wind-driven patterns danced across the surface of the pond.  Frank’s house is largely protected due to it location, but the tops of the trees swayed wildly as the storm unleashed itself.   At one point we heard a big cra-ack as a tree fell nearby, and we thought it may have taken out a power line as well.

Evening fell, and the house was dark except for one candle.  Frank had purchased drinking water, and he also scooped up a bunch of lake water in a barrel to refill the toilet tank, so that flushes were possible.  We ate, and our refrigerated food was safe for some hours, but for how long?   We all turned in early, and I found my spot on the kitchen floor again.