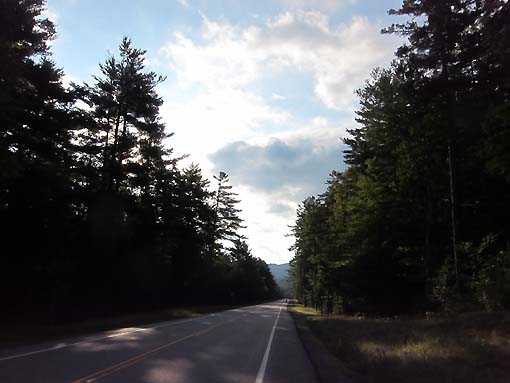 The group got up early this morning and all followed Frank on a beeline on US highways to his house, but I don’t quite know what they were smoking. The scenery is so breathtaking around here that, in my opinion, taking the backroads is a necessity.

Jack and I rose last, gathered our crap and started down the mountain.  The continued descent made it chilly but the scenery was magnificent.  We followed the AC turn onto Passaconoway Road and discovered one of the prettiest passages yet.  Quiet, winding, untraveled, pristine forsests, only a few campers here and there, descending along rivers, divine.

About 10 miles down we came upon Red Eagle Pond, pulled up our bikes, and just stared.  This is a spot you can only dream about.  A half mile of water spreading out with mountains and pines trees and clouds and blue sky all rising behind it.  And so calm the reflection is perfect.  Serentity on earth.  I think Jack could have stayed a week at this spot.  We did spend about 20 minutes there, which is what we’ll have to live with for now.

We soon reached Conway NH and found the Conway Café for breakfast.  Great little place, which even included a little movie threater, and the food was good too.  The next 7 miles had us looking for one thing: our last state sign.  We expected “Welcome to Maine” but what we got was “State Line Maine” as if some lawyer had written the thing.  But, we’d entered our 15th and last state (including Ontario)!

We rolled through Fryeburg ME and made a decision to stay on the AC route taking us north on ME5.  Frank had told us that we didn’t want to take this route due to hills, and rather to take US302 east.  But US302 was full of traffic, and anyway, we reasoned that, hey we just crossed North America – why fret about a few hills?

ME5 presented us about 5 extra miles and quite a bit of climbing through some gorgeous and little traveled roads, right through some perfect Maine forests, and Jack and I were very happy to have taken this route.    Through little towns of Lovell ME, Sweden ME, and on into Brigton ME.  One of the very steep downhill and uphill cycles almost reminded me of Top Thrill Dragster.

In Brigton ME we stopped for lunch at a pizza place, and ended up ordering a large mushroom and broccoli masterpiece which took us about an hour to consume.  That would all be fine except that Hurricane Irene was definitely approaching.  We ducked outside a couple of times to find dark gray clouds overhead, but we decided they were not part of Irene, but just part of the normal summer weather.  Maybe.

We took another pretty back road to Naples ME, and found a very pretty and touristy-looking town perched on a lakefront.  Jack and I stopped at a grocery store and stocked up on some provisions since we didn’t know what kind of setup we’d have tonight, stuff like tomatoes, cheese, ham, bread, and drinks.  From there Frank talked us another 8 miles in to his place in Raymond ME by phone.  Winds were starting to pick up, but still were only moderate.  Nevertheless, we were very happy to be finishing the ride today and getting to a safe place.

We pulled in to Thomas Pond Terrace and were presented with a great series of colorful signs welcoming us all in by name, with each sign titled with a state we’d visited plus all the stopping points.   I photographed each sign, although I’ll only post a sample here.  But each sign we’d pass made me grin more and more.   For Jack, Roger and me this was not the end of the tour, but for the rest of the team, this was (almost) it, and that realization brought forth many feelings.  Once again, for me, it was mostly one of some poignancy that this adventure will soon end.

We greeted all the guys at Frank’s place, a family homestead on Thomas Pond that is charming and in an idyllic location.  Visions of “On Golden Pond” came immediately to mind.  There were even two resident loons swimming out on the pond.  We all joked around out back for a couple of hours, along with two of Frank’s cousins who had set up the great signs.   We met a next door neighbor Tim, real nice guy, a true character, lively talker, about 85 years old, and avid hoarder of stuff.  You should have seen his porch piled high with paraphernalia.

In the evening, the seven of us sat around the living room watching one of the three channels Frank gets, and we of course took special note of the reports about Hurricane Irene.  It is supposed to hit our area tonight with rains, with winds increasing into tomorrow.  Despite the imminent storm, though, the sunset over Thomas Pond was quite beautiful.

About 63 miles today.  I think the AC routes are particularly rewarding in the gorgeous Maine region because so many of the the roads are heavily traveled, and the AC maps seem to get cyclists off them as much as possible.  Tomorrow we will plan to hunker down at Frank’s house as the storm passes.  It is very generous that Frank has allowed our motley team to stay here.  I am stretched out the kitchen floor at the moment waiting for the snoring to start.

4 thoughts on “RA89: Finally Into Maine”