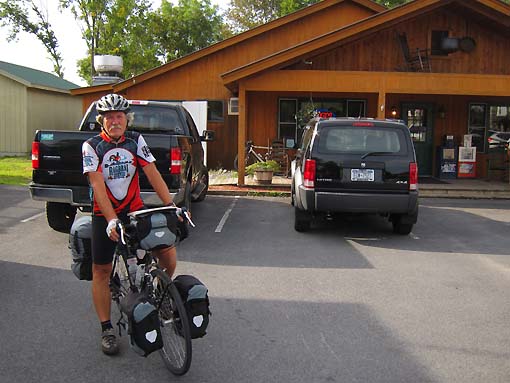 The guys all left early but Jack and I lingered as usual at the Ticonderoga Super 8, and eventually rolled over to the Hot Biscuit Diner in town for breakfast.  We then pedaled down to Lake Champlain for a ferry ride.  While waiting we talked to a number of families who seemed really interested in our bike trip.  It is kind of fun to get so much attention from nice folks.

You know what’s next… Our 13th state!  It’ hard to describe, but right away Vermont was different than upstate New York.   At first rolling hills of farms.  Maybe a little more populated (than the Adirondacks), and more colonial or something like that.  The farms and buildings had that old feel to them.  The little towns had 2 or 3 churches each, all with tall spires.  And lots of cemetaries.

We climbed lots of small hills through Shoreham, Cornwall, and rolled into Middlebury VT.  Riding conditions were ideal, with a fairly strong breeze out of the south but with plenty of hills and trees to neutralize it.   In Middlebury we stopped a checked out Middlebury College for a few minutes, then went in search of a bike shop.  My brake pads are significantly thin and I’d like to be carrying a spare set.  Unfortunately the shop had no stock of my type of brake pad, and so he directed us to a shop about 20 miles away in Rochester VT.

The shop owner provided some pointers on our intended route over the next mountain pass.  He described the Middlebury Pass (our originally planned route) as ultra steep on the descent, 18% at times, and as both unsafe and unfun for a loaded cyclist to ride.  He recommended an alternate route south, taking Brandon Pass, and Jack and I decided to pursue it.

This altered route added about 5 miles, added a few more feet of climbing, rolled us beside pretty Lake Dunmore for a while, and lessened the severity of the descent, stretching it into a longer distance.   In either case, however, we faced a fairly daunting ascent.  Four miles of 10% grade with very few breaks in the slope.  And then, one final mile at 15% grade.  You cyclists reading this know that a full mile at 15% is one long sustained grind.

But Jack and I know how to approach it.  With patience.  It took us a while but we both made it up without walking, albeit with heartrates in the 160 range.   This was probably the longest very steep climb I’ve ever done.

We stopped briefly at the top for nibbles (I brought a killer chocolate chip muffin up with me) and then started down.  The Middlebury bike guy was right – this descent was nothing but sheer pleasure.  No braking required, no technical turns, just smooth fast sailing for 6 or 7 miles.  If anything, the scenery got even prettier over the pass.  We were right in the heart of the Green Mountains.

Finally hit VT100 and retraced north to Rochester for the brake pads.  At the bike shop, there was very beautiful chicken pecking around in the parking lot.  We asked the shop guys for sugestions for a tasty dinner and they offered a few.  Our first try, at a place called The Porch, was a little strange.  We walked into this great old house all decked out as a restaurant and bar.  And the place smelled great inside.  But was empty.  Abandoned.  No customers.  No staff.  We called out hello.  Nothing.

But we scored on the second place, a book store / bakery.   Jack and I both had slices of quiche and bowls of soup (a gypsy vegetarian stew – really good).  The place had that book nook vibe to it too, with folk music playing and  tons of reading materials.  I’d go back there.

But alas, we left to head off to our campsite, south on VT100, then back north on VT107.  Very beautiful early evening riding along the White River, past farms and homesteads along a road often carved out of the river bluff rock.   I actually missed a cutoff to reach VT107 and rode some bonus miles in the wrong direction, but eventually realized the error and backtracked.  Jack and I caught up with each other at the campsite, White River Campground.

We found Roger just leaving, having found out that the cost was $30 per campsite with a 2 tent maximum per site.   The proprietor claimed that the tent limit was a state law but I suspect that’s nonsense.  The other guys were already checked in and set up.  They’d taken varying routes over varying mountain passes, but all ended up here.  Team RA unites yet again – the six of us here with Roger only a few miles away doing some clandestine camping.  We sat around the office picnic tables a while discussing the day and joking around for a while.

Now I’m in my tent, typing away as it gets cold, and enjoying my tent food for the evening – a peach sweet cream swirl made at that bakery back in Rochester.  I just talked to Linda on the phone, who is already in Virginia and on the way to Maine.  Does it get any better?  I don’t think so.

69.2 miles today.  I looked at a state map and we are almost 2/3 the way across Vermont already, west-to-east-wise.