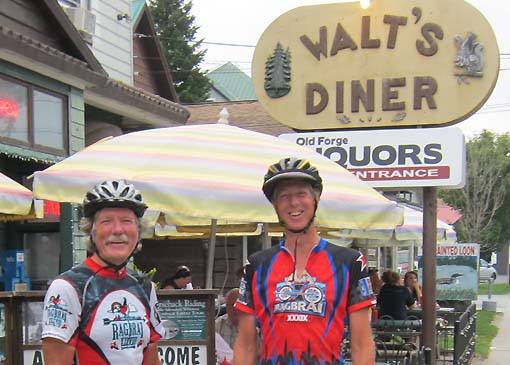 Nice evening of sleep last night. There was no grass at our campsite, so I learned that when you pitch your tent on the dirt in the rain, its floor is not only hard, but the tent bottom is really muddy when you go to roll it up.  Ah the little things we learn.

First thing out this morning a doe came prancing right in front of us across the highway.  Just like ten feet away! We just stopped and admired her – it didn’t seem right to try for a photo or anything.

We rolled into nearby Old Forge NY and stopped at a convenience store.  Both the lady cashier and a customer highly recommended Walt’s Diner for breakfast, so we reluctantly rolled past Kee’s Pancake House where the other guys were seated.  Walt’s Diner was packed and for good reason – their breakfast was superb.  Jack’s omelette was great and my eggs and blueberries pancakes were as well, and too huge to eat too.  Great ingredients, great service – Walt’s Diner has it going.

We took a nice “South Shore Drive” beneath the Fulton Chain Lakes, giving us some great scenery and low traffic.  Unfortunately, the skies continued to darken and finally opened up on us with a steady shower for about an hour.   We reached Inlet NY, then completed a short climb to Racquet Lake, contemplating lunch.  Instead we continued another 13 miles to Blue Mountain Lake NY.  Jack has done lots of camping in these parts and was quite familiar with all these towns.

We both had half of those monster subs left from last night, and so bought a drink from a small marina and sat on their dock picnic table, staring at the lake and boats and mountain, called Blue Mountain due its being covered in blue spruces.

The climb out of Blue Mountain Lake would challenge anyone.  I bet even Bill used his granny ring, but I wouldn’t bet real money.  In any case, it is probably a mile and a half of 10-12% grade, something like that.  It gets your attention.  Jacks says we’ve moved from the lakes region of the Adirondacks to the mountainous region.  Following the big climb we continued non-stop rollers, often rolling down past beautiful lake areas with lily pads and blooms.

About 8 miles out of Newcomb, the thunder started to roll and the skies darkened again.  Pedaling to Newcomb, by Willie Makeit, illustrated by Betty Wont.  About 3 miles out the rains started down in earnest.  Oh well, just part of the deal.  We found our camp at Harris Lake, a campground run by the New York Conservation guys.  Our four other amigos were already set up and tucked inside their tents, so we never saw them but yucked it up with Roger and Bill.  Our tent site, #22, is really tiny, again without grass, and their four tents occupied practically the entire area.  Jack and I decided to spill partially over into the adjacent #21 site, since, after all, it’s steadily raining, the park is nearly empty, and it’s a Sunday night.  I mean, how many more campers are they expecting?

As I sit here and type, we’ve received word through Gary that the ranger has asked Jack and me to move our tents fully onto site #22.  Jack and I have decided to “passively resist,” and simply just stay put.  We’ll see what happens.

About 72 miles today, as usual about 10% more than planned.  Still, I think yesterday and today were the longest days left on the plan – all future riding days should be shorter.  That doesn’t mean easier, with the mountains of Vermont coming up.  In the last 7 days we’ve covered the most ground (485 miles) of any 7-day stretch on the tour (although RAGBRAI was about the same).