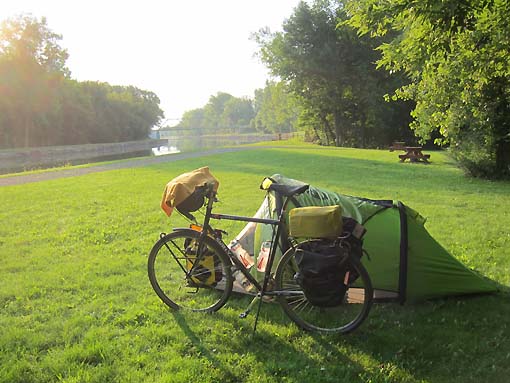 Out of the beautiful Holly NY campsite and back onto the AC route.  Jack and I’d planned to meet up with the guys at the next town but, as usual, we rose slower and were about an hour behind them.  In Brockport, we caught them just leaving Colleen’s Café (Jesse’s find) and raving about it, especially the French toast special.   Jack and I both ended up ordering it.  Great stuff, with 100% maple syrup from somewhere in New York.  Add in excellent coffee.  Colleen’s is a place with good atmosphere that really cares about the food and ingredients.

We again followed the Erie Canalway Trail today for many miles heading towards Rochester NY.  I took note of several liveaboard barges for rent that totally reminded me of those in Europe.  Likewise, the locks and bridges reminded me of our trip along the Meuse as well.

Nearing Rochester, we ran into another cyclist who took note of us, and offered to give us a tour of Rochester off route.  He took us northward up the Genessee River, noting that it and the Nile River are the only rivers in the world that flow northward (to be verified).  We rode right into the heart of downtown Rochester while Dave pointed out different buildings and structures.  The Erie Canal itself had once flowed through here and was now only an empty concrete aquaduct filled with homeless people and high quality graffitti.   A return leg south took us through the University of Rochester and finally back onto the Erie Canalway, where Dave had to depart.  We thanked him heartily – such encounters and detours are what touring is all about.

A stop in nearby Pittsford at a bike shop, where Jack decided to replace a rear tire and rotate front and rear too, all in order to eliminate any worry that his tires would make it to the Atlantic.  I think my tires should be OK, so  I spent the time playing around with my derailleur and lubing my chain, since dust from the unpaved trail was pretty severe.

Another spin to Fairport, where we stopped for gelato and ended up meeting with four touring cyclists just returning from a circle tour around Lake Ontario.  They were excited to be home and full of energy, asking us all manner of questions, sharing stories, and advising us on route options.  It was cool to meet them.

Instead of their suggested route, we opted for the AC route through Palmyra.  Neither Jack or I are ever in a hurry, and extra miles or hills don’t make much difference really.  Of course they take longer and require more effort, but getting there fast is never what bicycle touring is about.  What’s important is having fun while you are doing it.  Our route actually took us southeast through Palmyra, then an abrupt turn north toward the coast of Lake Ontario.  We passed many farms, especially bean farms and apple farms.  I fully expected to be way-layed by a few farm dogs, but only one loping Great Dane ever gave any chase, and that mildly.

North of Palmyra the route got a little hilly.  We’re talking hundred and two hundred foot hills, but they were certainly a departure from the flat flat days through Indiana, Ohio, and Ontario.  We know that hilly days are ahead in the Adirondacks and Appalachians – maybe this is some foreshadowing.  After 15 miles of it we finally reached the coast in the town of Pultneyville NY.  Jack and I found a restaurant and considered dinner, but the choices were limited and the view (of the lake) was subpar, so we decided to pedal onward the final 10 miles to our goal, Sodus Point NY.

If you’d think that a road along the coast of Lake Ontario would be relatively flat you’d be wrong.  We tackled 10 miles of rolling hills in to Sodus Point, a bit of a chore on top of what already was an 80 mile day.  And, lo and behold, we found the team at the South Shore RV Park.  Jesse, Bill, Gary, Frank, and drumroll….Roger!  Team RA reunites in its entirety yet one more time!  It’s amazing.  I almost thought this would not happen again after we departed in Sandusky/Huron OH.

We set up, joked around for half an hour, and shared some upcoming route information.  However, it was high time that Jack and I pursue dinner – we hadn’t eaten anything besides breakfast all day.  A mile and a half downhill into the town of Sodus Point.  This town is a seaonal beach town and was in full swing when we arrived, with ice cream shops, bars, and grill restaurants lighted up and bouncing with music.  We selected Abe’s Waterfront Bar & Grill and enjoyed a very nice dinner on the marina looking at the docked boats.  Jack’s: caprese salad and fettuchini al fredo, Mine: NY strip, baked potato, vegatables, salad.   Oh, and some Samuel Adams Oktoberfest beer on tap which is really good stuff.

A roll back to camp in the dark with all lights aglow.  Climbing a couple hundred feet to camp was a chore, but the good dinner with Jack sure seemed worth the effort.   About 88 miles today, longer than planned.  The detour into Rochester added a bunch of miles, and you’ve got to apply the normal 10% upward adjustment.  Tomorrow’s ride will also be long, up along the lake’s coast.  If today’s segment along the lakefront is any indication, we are in for some hilly terrain.

I am certainly noting a complexion of finality in some of the team.  There is increased talk of finishing the tour, or of how many days or miles are left, or of how more direct routes can be taken, or closer endpoints at the Atlantic Ocean can be chosen.  Various practical factors are at play, but fatigue is also playing a role, and I have felt some of this deep down fatigue myself.   Still, we are looking at two more weeks of touring on our plate and I am anxious to see what we will make of it.  The Lake Ontario coastal ride tomorrow should be great, and thereafter entering the Andirondacks will be a big change of scenery and riding conditions.

One thought on “RA80: North to Lake Ontario”