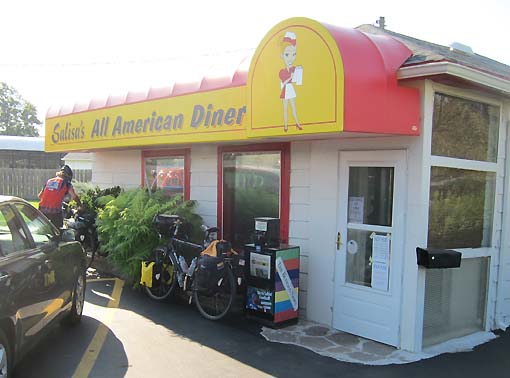 Up and out of the KOA.  I slept quite well – my earplugs seem well tuned to blocking out the freeway noise.  But really, KOAs are no places for self contained campers.  We only need 10 square feet of grass for our tiny tents, and that’s about it.  It is always nice to have a source of water and a place for #2 within bike distance..  But you don’t need much more, in my humble opinion of course.

North up and over the I190 bridge again. Jack and I dutifully walked our bikes halfway across, then finally mounted up and carefully rode the rest of the way.  Very carefully – for any slip would send you flying over the low railing and down a few hundred feet.  We are such scaliwags.  Then a makeshift course through eastern Niagara Falls, seeking out NY31.  When we found it, we saw that it was excellent for cycling, and was even designated as NY Bicycling Route 5.  The extra wide shoulder allowed Jack and I to ride side by side, a rarity, especially with the panniers.

Just leaving the edge of town, we passed by a café called Salisa’s that was packed with cars, and our bikes just seemed to turned themselves around.  A departing customer told us they made the best breakfast in town.  Sold.  My eggs and sausage were very good, pancakes OK.  Atmosphere 9/10.  Jack and I are getting pretty good at spotting the local “folksy” dining hot spots.

North then east to the town of Lockport, which has much history with the Erie Canal.  We found the canalway trail which was used originally for horsedrawn barges, and is now used for hiking and biking.  The surface is crushed powdery stone, which actually rides very well, only slowing down a bike a little bit.   The similarities in appearance to canals in Europe immediately struck me, too.

Through Gasport, Middleport, and Medina.  We tried one segment on the parallel roads but found the riding more interesting and carefree on the canal trail.  We stopped once or twice for beverages but were otherwise stuffed from the large breakfast.   In Albion we pulled in to town, thinking “ice cream” and found a Coldstone Creamery.  Oh well, better than nothing.  My coffee shake had good flavor but, in my opinion, was too high in fat, too creamy, to make a good milkshake.  Jack might counter that it was too creamy to make a bad milkshake.

The guys whizzed by and up the road.  Guess where we found them.  Yup.  With everyones’ heads stuck to electronic screens.  We conferred on lodging options for the night, and then I decided that if I was to endure this place I might as well grab some wifi, and so sat and sent a few emails.  Still, within 20 minutes Jack and I were out of there, leaving the McFoursome behind.    We rolled back down the canal another 12 miles or so into the town of Holley NY, in which the AC maps promised was a camping spot.

We explored some picnic areas immediately near the canal bridge, but the posted signs indicated the park closed at 10PM.  Rolling into town, we spotted a Holley policeman and asked about camping options.  He directed us a little bit further down the canal, and when we reached this area we were delighted to find a secluded place right on the bank of the Erie Canal, with picnic table and the sound of a rushing waterfall behind us.  Lovely. (And free.)

Frank, Gary, and Bill joined us about an hour and a half later.  Jesse has gone off on his own to find a motel.  We also heard that Roger was ahead of us but is now taking shorter days, so that likely we’ll catch up with him tomorrow.  Jack and I found (cop-recommended) Sam’s Diner in town for dinner, and even though neither of us were hungry we managed to thoroughly enjoy rigatoni dinners there.

Very nice to be back with the team at a gorgeous campsite here on the canal bank.  About 65 miles today of easy riding.  Frank even says he is cutting back on his food intake because our riding days have been so flat recently, which is probably a good idea.    Tomorrow we plan to continue on the Erie Canal trail for most of the day, then bend north to the coast of Lake Ontario.  As usual, I’m looking forward to it.

One thought on “RA79: Along the Erie Canal”