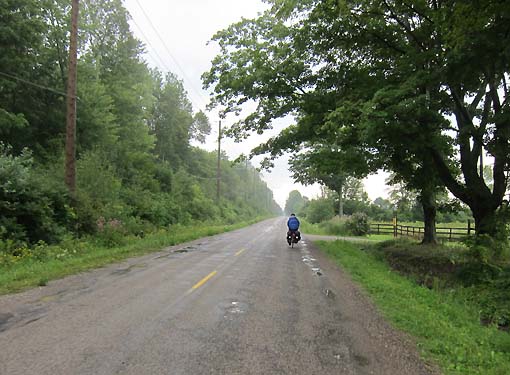 I woke up several times last night to the moon filtering through the trees and onto my pillow.  Does it get better?

By 6AM big drops of rain, thunder, and lightning were our companions.  I was forced out into it by nature.  Drenched, I returned to my tent with the rains continuing steadily, so by 7:45AM I decided to start packing up no matter what, figuring, we’ll either pedal off or at least check into a motel.  The camping rate at this park was practically the same as a motel anyway.

The rains finally slowed to a reasonable rate, so Jack and I rolled out of the park and into town, finding a modest café for egg sandwiches and beverages.  We talked to a cycling couple down from London Ontario for a 2-day trip, and bummed out about the rains.   Then out onto the Adventure Cycling route in full rain gear.

As is often the case, the rains brought a change in the winds, and they’d changed from the usual SW to now NE, as we drudged east into them.  The rains slowed and then became just a spit, so the riding was actually pretty good.  We crossed through small towns, just tiny intersections with names, Houghton Centre,  Clear Creek, Port Royal.  At one point we passed 4 hugely antlered elk inside a pasture, and stopped to take photographs.

In Port Rowan we explored around and found the Boathouse on the water for lunch.  Port Rowan is located at the “base” of a very long peninsula that juts out into Lake Erie, one called Long Point.  Submerged beside the peninsula, especially on the western side, are hundreds of boat wrecks, many from the late 1800’s.  There was a big poster showing them inside the restaurant, and we soon even found that the infamous Edmund Fitzgerald was located very close, immediately south.  Kinda cool.

While discussing partisan politics and otherwise killing time in the restaurant, the skies really opened up outside.  Back on went all the rain gear, and off down the road we went for another 20 miles.  As we approached Port Ryerse, it was obvious we were going to run into even more severe stuff as the skies got dark grey and the lightening started up again.  We hoped to make Port Dover before the onslaught but didn’t make it.  Blankets of big heavy rain started bashing us.  We rode for a couple of miles in it, completely drenched, but when a lightening and thunder clap were too close together we found a pavilion roof at a conservation park and rolled underneath, playing some games with rocks as we waited it out.

Riding so many hours in the rain returned memories of the Olympic Peninsula.  Just like the good old days.  It was actually kind of fun and a nice change of pace, and I’d rather ride in a headwind with rain than with just a headwind.

After only a 15 minute wait or so, the rains eased and we were back on our way, and soon in Port Dover Ontario.  Among other things, this town is known for motorcycle festivals that happen every Friday the 13th.    Beside that, it is a very pretty beach town, complete with the stereotypical ice cream stands, hamburger joints, restaurants and taverns along the water.  Despite the rains and some chill, but I celebrated with a chocolate ice cream cone.

Jack checked out the Erie Beach Hotel next door and found a double room at an acceptable rate.  They wouldn’t allow our wet bikes in the room (and I don’t blame them), but offered to lock them up in a tool shed for us after we removed our bags.  As we moved in, I think both Jack and I realized how cold we were, and so cranked up the room heater, layed out or hung all our wet clothes, and then both took long hot showers.

We walked beachside to the Beach House Restaurant for a cold beer.  Jack and I really enjoyed watching the final round and playoff for the Roger’s Cup PGA tournament.  The bartender gave us the number of a nearby pizza place and so we ordered right there from the bar, then walked over to pick it up.  They made some excellent pizza (half chicken & mushroom and half onion & black olive) and we enjoyed it while roasting in our warm room, watching the end of the playoff.  We have both tried blogging from this hotel but, while the wifi network itself is fine, the connection to the internet is most often absent.

46 miles today, less than planned, limited by the heavy weather.  Our plan takes us to Port Erie tomorrow, but we’ll have to ride a long way to make it.  We’ll see.  Jesse is only about 40 miles west of Niagara Falls tonight, having taken a straight path there on larger highways.    We’ll take either one or two days to catch up with him.