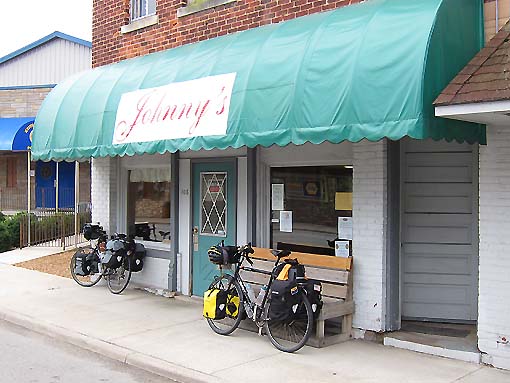 We got two warning sprinkles last night, enough for Jack to jump under the pavilion roof and me to zip up the tent.  Then some moderately heavy rain for a half hour or so.   It sounded wonderful to me and I slept very well all night, and awoke fresh and early at 6AM.

Jack and I considered the Pour House for breakfast, but instead found Johnny’s Café open for a good full breakfast.  Then out onto the road with a partial tailwind and nice overcast skies.   Our route took us parallel to the Ohio state line for four or five miles, and we actually posed at two different “Ohio” signs, thinking we might not see another one on these little county roads.

Our 10th state!  Wow, it actually is starting to feel like we’re making progress on this tour.  We rolled up OH500 through the town of Payne OH almost without stopping, then did stop to look around in Paulding OH, visiting a bank’s ATM in the process.  Nice courthouse in this town.

A few more miles took us to a larger town called Defiance OH where we stopped at a Dollar General.  I found new tent fan batteries, safety razors, and a new electric hair  trimmer (my old one completely corroded due to the humidity). Jack and I found a place for lunch called Breadstix Bistro which turned out have great food.

Further down the road we stopped at a little grocery store in Florida OH for a beverage.  Bill, Frank, and Jesse soon joined us and we clowned around in the corridor for a while.

Still further northeast we reached Napoleon OH.  I was immediately impressed by the stately courthouse here, almost of European elegance.  We rolled around the old downtown area, then discovered where the McDonalds was, and labored through a mile of heavy traffic and no shoulder to get there.   Sure enough, all our amigos were camped out, fries and McFlurries in hand and utilizing the wifi.  I told them they all had a sickness for McDonalds, what with all the neat eateries downtown.  However, my anti-McDonalds commentary did not go over very well with the McFans.

Napoleon was to be our destination for the evening, but we all decided instead to ride 14 more miles to a state park.  The ride was great, slightly assisted by the tailwind and accented by that perfect lighting of the 5PM – 6PM hour.  Our route took us by one of (if not the) largest Campbell’s soup factories in the nation.  We saw semi trucks loaded down with vegetables making deliveries.

Now practically in Grand Rapids OH, we are staying at the Mary Jane Thurston State Park.    It is a good quiet spot, very primitive.  We quickly set up tents, then Jack, Jesse, and I rolled into town for dinner and a beer.    We found LaRose’s Restaurant, a rather upscale place, but noted that folks in mini-skirts and jeans were entering, so in we went in our bike clothes.  We took a great table outside facing the Maumee River. Jack’s dinner was potato heaven, and I think he won the Phil Denisuk award with a beautiful apple dessert with ice cream.  I was in heaven with a local brew gold beer, a cup of outrageously good French onion soup, grilled salmon with hollandaise and asparagus.  (Jesse simply had beer – he’d already eaten at you-know-where.) Really, does it get any better?

79 miles today.  Longer than planned, but we rode it in order to reach this campsite.  We are now easily within a one-day shot to reach Sandusky OH, our point of departure for the ferry to Canada.  However, it will take another 70 mile day, and so Jack and I have decided to break that up into 2 riding days.  Roger, Bill, and Frank have decided not to go to Canada, while Jesse will go and Gary is on the fence.   I believe that Bill and Frank wish to ride longer days from here on out, and will probably arrive in the Buffalo/Niagara Falls area before we do, and go on east from there.  So today may have been the last day that we will ride together as a seven-some.  As usual, we’ll wait and see how things work out – it is certainly one of the amazing elements of this tour.   Riders like a mixture of riding and exploring and camping in varying fractions.