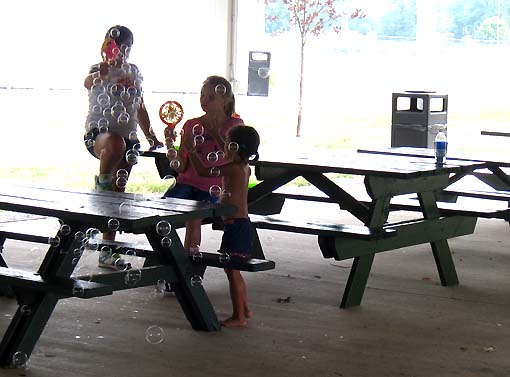 My hopes of finding things to do in Monroeville IN were dashed pretty quickly this morning.  This is a tiny town.

We packed up most of our stuff early because the pavilion is being rented out for a function later today.  I could just see a bunch of little kids jumping around on top of my bed mattress.  Holding plastic forks or something.

I talked to Jesse this morning and he is in North Manchester IN, only about 40 miles west of Fort Wayne.  He’s been catching up with us nicely, taking a slightly more northern route and a straighter pathway.  He will ride today and try to reach here this afternoon.

Well, Johnny’s café on IN101 was closed, and the Pour House Bar and Grill, which normally serves breakfast, is closed on Sundays.  I rolled all around the town and found about 100 houses and 4 churches.  But even the churches had no cars in front.  Where is everyone?  Two gas stations were the only things open, so Bill, Jack, and I scored a few doughnuts and beverages and sat around on the curb like true vagrants.  We considered a short ride up into Fort Wayne to find civilization.

Back to the park to do what?  Blog, munch on snacks, do some route planning, and wait for the ice cream place to open up at 3PM.   So, in addition to resting our bodies, we are certainly encouraged to rest our minds as well since there is so little to do here.  Some of us spoke with an extremely talkative and friendly guy who had been associated with the pavilion operations for a long time.  What an agile talker – he could angle off in any direction for many minutes.

A large annual family reunion is happening in the pavilion right now.  The family does not look very happy to be here, and aren’t too friendly to us yet, so I don’t expect to be joining them in celebrations or nibbles.  And we didn’t see any beer toted in, so we doubt things will turn to the upside.

Well, I was wrong.  Once everyone had eaten, it was determined that plenty was left, and so we were permitted to step up to the buffet for BBQ meatballs, weenies, noodle salads, and other tasty dishes.  The best item, though, was a slushy machine that they’d probably brought in for the kids, but we cyclists went after in a big way.  Koolaid red and lemonade flavors!

A friendly touring cyclist arrived in early afternoon to spend a few hours with us.  He had a nice Waterford touring bike that was fitted to break apart for normal airline sized luggage transportation – pretty slick.  As a solo traveler, he was covering more miles each day than we were, and so after a few hours of steady rain he departed to get more miles in.  Nice guy – I forgot his name unfortunately.

We watched the family reunion move outdoors, where there were games for the kids, balloon popping contests and ring toss.  It was a ton fo fun to watch them, but after a while I needed a break.  Even before the rains stopped, I left for the Whippy Dip for a vanilla milkshake.

When I returned, the rains had fully stopped, and the other guys went out for their dinner.  Roger and I sat inside the shelter and cranked up a bootleg VHS of Grease.  Rizzo was just about to mock Sandra D at the pajama party when Gary walked in with his mom and dad and sister.  We retreated outside and talked, and while we did the others came rolling back, including Jesse, who had ridden in from North Manchester.  The team was reunited yet again!  Team RA!  Team RA!

Gary’s sister took a series of photographs of the team, since we don’t think any photo has all 7 of us in it yet.  Probably every blog is going to show this one:

We visited and caught up out under the pavilion, then all graduated indoors.  Why, you ask?  To see the rest of Grease, of course.  There was talk of rolling it back to the beginning, so Gary and I ducked out on our bikes to the Whippy Dip again for dinner.  I got a cheeseburger and large vanilla cone, and then had the chore of riding the cone back to the park.  I had it all over my face and one hand by the time I got back.  With the pavilion lights low we had a regular movie theater set up, albeit from a 16” standard res color TV.  Grease is the word.

I decided to sleep outside tonight since it’s cooler, and sleeping on the tile floor just didn’t feel right to me last night.  Besides, it’s a good opportunity to air out my tent and give it a dousing with the NeutraAir.   Jack is actually out here too, but without a tent, just his mattress and pillow.

Some of us have agreed to take 3 days to reach Sandusky OH, the point of departure for a ferry across Lake Erie.  This will make the next three days a shorter.  I detailed out a possible riding plan this morning and have us reaching Bar Harbor on August 30.

One final note about tiny Monroeville IN.  This town welcomes in touring cyclists like no other town we’ve visited.  Allowing us to use the air conditioned shelter and pavilion and all its utilities and supplies is very generous by this town.  Every touring cyclist on the Northern Tier should plan to stop here.

5 thoughts on “RA69: Rest in Monroeville IN”