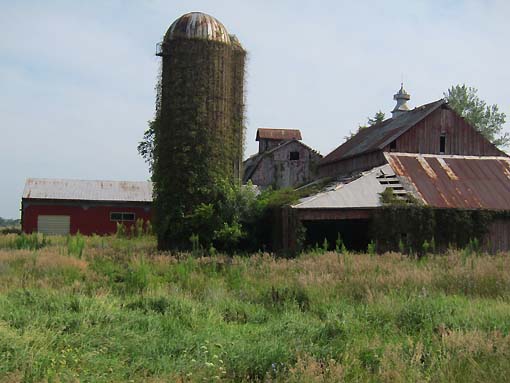 Nice sleep last night, with no earplugs.  A few kids bugged us late at night (shouts of “Are you guys camping?”) but that is pretty much par for the course in small town city parks.

Jack and I scrounged around Kewanee in the morning for a breakfast joint, and finally found Uncle Joe’s.  We entered as the only customers, but quite a few others soon joined us.  Average eats but very high on atmosphere.  A couple gave us the “awed” reaction respecting our trip.  We then jumped into a lengthy discussion with a semi driver.   He said he’d been asked to run for mayor of Kewanee but he couldn’t afford to because it paid too little.  He also said he was running trials for a hydrogen supplemental engine for tractor-trailer rigs, something he hoped would hit the market very soon.  And other topics like that.  In my book, going to Uncle Joe’s was the perfect spot for breakfast.

We rolled out and through the towns of Ocseola IL and Bradford IL, stopping for cold beverages when they were available.  We again were headed ESE, and the winds battled us at times, coming from the SSW.  We haven’t had a tailwind in many weeks – it’d sure be nice to get one sometime soon.  Very warm and humid again today, too, with predicted high about 96F.

Into the river town of Henry IL, right on the Illinois River.  We found a Subway for lunch – these can be really nice because the fountains are open and you can just get 10 refills if you want.  We wanted.  We ran into a couple of ladies there that also gave us the big “wow” reaction concerning our trip, always fun.

On a slog south out of Henry, I probably started daydreaming and missed a turn.  Jack was about a half mile back and sprinted up to catch me, yelling out “STOP!”  We refigured our route but alas, had to endure more than a mile of gravel.  Jack is duly giving me the razz about that.

Another 22 miles into the town of Wenona IL.  It looked really small on the map, so we didn’t know what to expect, but we found the guys hanging out at the library.  Two bars were open down the street, and lo and behold, a place called “Kim’s Sweet Shop” beckoned with ice cream and other sugary treats.  And let me tell you – they made one mean vanilla milkshake.  Made with real ice cream and milk, a little bit icy, with just the right vanilla punch, and a little bit of standing milk on the edges.  A thing of beauty.  A lime slushie for dessert.

Then the team joined up for light dinner and beer at Boardwalk Place.  The Amberbocks were good but my three tacos were served in taco shells that had gone rancid.  Good thing I wasn’t hungry.  Instead, it was a nice hour sitting around recounting the day, the heat, the humidity, everyone’s various routes, the corn, and other incidents.

Gary had received permision for us to tent in the Wenona city park.  On the Main Street sidewalk, several town locals even told us that we must use the new showers just installed.  When we rolled over there, we found Gary already there but unfortunately, he’d accidentally locked the shower door after he used it.   Gary and I rolled back around town trying to find someone with a key, the fire department, the police department, without luck.  Oh well.  Gary was finally told that a “guy in a green truck” would come by to open it for us.

We set up tents and hung around for a while, waiting.  Roger had his heart set on a shower, claiming he hadn’t had one since July 4.  The fireflies came out and it started getting dark, so we all decided that the shower was just not going to happen.  Roger, however, grabbed me and we headed over to the door with some tools in hand, attempting to pick the lock.  Inside of only 60 seconds, Roger had the door open.  With glee, he called out, “The shower is open. And I’m first!”  I’ll probably wait until tomorrow morning, so I’m now typing in the tent wishing I had pie.

Riding in this heat, (and humidity and wind) was a chore today, but you know, ever since the day of WHITLOCK, nothing else is too bad. Forecast for tomorrow is a bit cooler – we’ll see.  67 miles today.

By the way, Jesse decided to sit out the ride today, remaining in Kewanee IL.  I expect that he saw the weather forecast for hi temps today and cooler temps tomorrow, and so decided to wait for the cooler temps and then play catch up on a more direct route.  Check his blog for his take on it (I have no wifi at the moment).  As usual, I do love the way my RA teammates do their own thing, take their own route, and ride the way they want to.

One thought on “RA64: Midwest Heat”