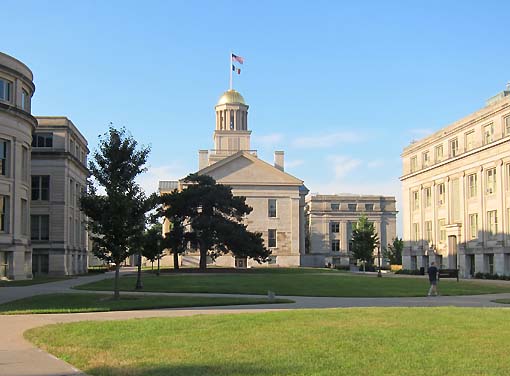 I woke up feeling weak this morning.  I’m sure it had nothing to do with the 96 oz of beer I drank yesterday.

Up through Iowa City and the University of Iowa in the morning – Jesse’s alma mater.     Jack and I stopped in West Branch IA for breakfast, this time an all-you-can-eat affair prepared by the Fire Department.  The line was pretty long but they were churning out pancakes at an impressive rate.  Sometimes the servers would flip them high into the air for cyclists to catch on their plates.

To Moscow and Wilton.  I felt sluggish all day and soon realized it was mostly dehydration, and so started chugging the fluids, stopping often.  Jack and I linked up in Wilton for lunch and I got a tasty beans and sausage over rice dish at the Carbo Hut.  We met a couple who’d done a fair amount of touring and talked for a while.  As we were leaving the town we noticed that not many tents were left and not very many cyclists either.  A look at the map told us that “services” had already closed.  Apparently the Ragbrai folks want you to speed up and get off the course on the last day, but we were still slow-playing things.

We spied Roger out of town and I stopped to harrass him while Jack continued on.  But I suppose the “stable horse” mentality eventually kicked in.  Only 20+ miles to go.  I hopped on the bike and rolled through without much further stopping.  As we reached the outskirts of Davenport, families were out in their lawns cheering people along – it was pretty cool.  A handful of hills were throw at us as a finale, then finally down to the Mississippi River and the ride’s end.

For 20 minutes, I rolled around the grounds looking for the Ragbrai “Homeland Express” trucks for my baggage.  I eventually found a sign that indicated the Ragbrai Campground, but no baggage.  I had to ask three different Ragbrai Information people before one gave me some complex instructions on where to go, down along the river, up through town, half a dozen turns.  What?

I soon got lost in the middle of downtown Davenport, and found myself at a walking Street Fest.  I figured a Ragbrai booth might be there, but no.  Worrying that Jack might be waiting on me, I called him twice but only got his voice mail.  What now?  The Ragbrai information guy had told me St Ambrose University, and so I got directions from a local.  Another few miles up a big hill.  Jack eventually called (using Jesse’s phone) and confirmed the directions, guiding me in.

What were the Ragbrai people thinking when they put the baggage 5 miles from the rides’s end?   Why at St Ambrose University?  Why not at Harvard University?  The lack of information or signs or maps (from the “Finish” seemed a real oversight.  Fortunately, Jack and Jesse were waiting for me.  We re-organized all our stuff back into panniers, then re-discovered the joy of fully loaded riding, chugging another 3 miles up the hill to the Days Inn next to I-80.

Time to vegetate.  In air conditioning.  Papa John’s pizza, liters of Coke, Costner’s “JFK” on TV, long shower.  Does it get any better?

Ragbrai is a seriously wonderful event.  I enjoyed it even more this year than last year, which wasn’t easy.  The last couple of days tuckered me out, thanks mostly to Bud Lite and riding too hard “for fun,” so a rest day tomorrow is very welcomed.  About 76 miles today, with a weeklong Ragbrai total of 488 miles.