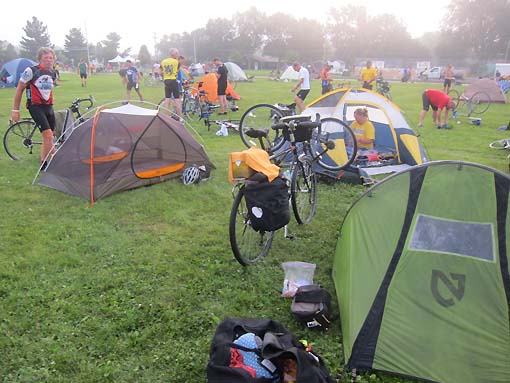 Following 22 miles of riding from Grinnell IA, I repeated a breakfast this morning with the egg muffin guys, and sat around trying to enjoy a religious rock band playing while sitting in the shaded beer garden.  A fellow was sitting next to me with Bloody Mary in hand, and I said, “Jeez, this band could drive me to drink.”

I lost Jack before breakfast and I never saw him again today on the route.  Instead, I started seeking out all live bands in each town, which often took me to the beer garden.  Well, when in Rome… by the fourth town today I’d already consumed 4 beers.  Before the town of Marengo IA I picked up a smoked turkey leg to go, then sat having lunch in the Marengo city park watching a whole bunch of cyclists do line dances in the pavilion. To the right, to the right…

We entered the “Amana Colonies” in Iowa, which were a group of Germans who fled from the Lutheran church in Germany to New York, and then landed in Iowa around 1840, or so I was told.  These towns including West Amana, South Amana, Homestead, and Oxford.

Another 6 miles or so took me to a sprawling farm with a big pond with signs that read “Swimming Beer Party.”  Well, I guess I had to check that out.  I stopped for a photo, then decided another beer was in order, camped out on the lawn, and very soon spied my 2 Dutch friends from the other night.  Jons and his dad and I then proceeded to spend the rest of the afternoon drinking beer.  The property owner was fairly wealthy, and had bought a Ragbrai beer license simply because he wanted to have a party in his yard.  So he did charge money for the beer  but was also giving them out left and right, and strolling around telling stories.

Afterwards the three of us (wild and crazy guys) rode in to camp together.  I’m not sure if was all the beer, but Jons’ dad really moved out, and I was dripping wet keeping up with him.  I also set a new personal record for arrival time into camp:  7:25PM.  My bag was sitting there beside the Ragbrai truck along with only 3 or 4 others – all security long gone (You’re supposed to pick it up before 6PM).  Also, I stopped at nearby Pork Belly but neither Phil or Paul were at their tent or around anywhere I could see.

I set up my tent and called Jack, who had just finished dinner with Jesse.  Jack and I then rendezvous’d on the bikes for a spin to the concert stage.  Tonight’s name performers were “38 Special.”  We finally got into the stage area, which was overly hot even though sort of outside.  And the band?  Blah.  Low energy, going through the motions.  Sound quality so-so.  We left after only 4 tunes or so, which included a dippy guitar solo and a drum solo (sigh).  (Not) So Caught Up in You…

Some flame jugglers were actually more entertaining outside the arena.  They dropped the batons so often that Jack and I figured we might be able to do better (well, at dropping them anyway).  Slice of pizza for dinner.  That turkey leg (and 6 or 8 beers) sorta filled me up otherwise.

79 miles today, the longest mileage day for this year’s Ragbrai.  Tonight’s tent pie: strawberry-rhubarb, made by different church ladies.  Tomorrow is the last day of Ragbrai, after which the rolling party will quickly break up as cyclists return to their lives.  Almost hard to believe.  A little sad even as I think about it.