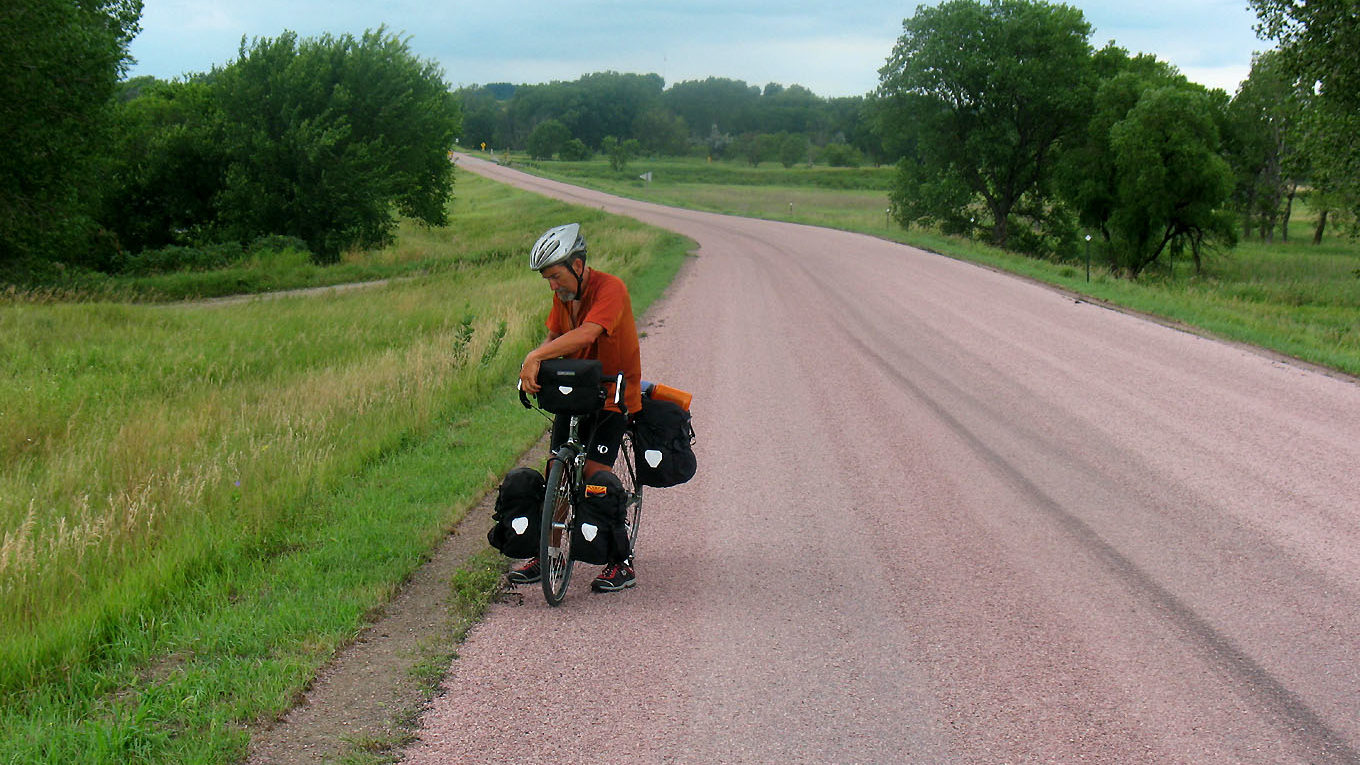 Bob and Diane both woke up real early. At the sound of them, I got up too and walked over to use the park’s restroom. It had a great tiled shower with hot water and sinks with mirrors, good for a thorough cleanup. Nice way to start the morning.

Randy was up when I returned, and table settings were being prepared by Diane and Bob. They poured coffee for everyone, and then effortlessly (it seemed) started bringing out plates full of pancakes, blueberries, syrup, butter, and cartons of OJ. Did I say our new friends were generous? This was really exceptional. Diane’s blueberry pancakes, made in the Airstream kitchen, were outstanding.

Joe announced he was going to play some golf this morning. The Springfield Golf Course was immediately adjacent to the RV park. He and I had talked about golf last night, so I asked him if he would mind having a partner for 9 holes. Randy didn’t want to play, but said he’d be very happy lounging around camp reading, since we had a short riding day today. Bob and Diane were about to hit the road, so we said our goodbyes and profuse thank-yous. It had been a real pleasure to meet them and spend so much time.

Joe and I then rode bikes over to the pro shop and checked in. Of course, neither of us had clubs. Joe had about a dozen balls and lent me half of them. For nine holes it cost $14.60, which also gave us access to a dusty old collection of 1970’s era golf clubs piled up in the basement and some moldy old golf bags. Perfect.

We sifted through the clubs, each picking out what might be useable. All except one of the woods were actually made of wood. At least the shafts were steel. Our irons ended up being a mixture of different brands.

Joe was great company out on the course. He and I played about the same level of bogey golf. The course was actually quite interesting, with some big elevation changes, blind tee shots, lots of trees, tilted fairways, and sloped greens. Its best feature was the occasional great vista out over the Missouri River. Neither of us kept a scorecard but I figure I shot something around a 45 – ho-hum bogey golf. I finally managed to par the final hole, a medium-long par 4. Using those crusty clubs (my alibi) it felt pretty sweet.

Back in camp, Joe packed up the truck and we said our goodbyes. Randy was also fully packed up, so I rapidly broke down my tent and packed up as well. By 11:30am we were climbing the hill out of the park and saying goodbye to Springfield.

At Casey’s I grabbed a big lemonade and a couple of donuts. Road food. We headed north on 37, then east on 18A (Apple Tree Road). The southeast winds combined with a chip seal mess on the road made the riding difficult. Slow going, around 9-10 mph, for maybe 10 to 14 miles, not that much fun.

We finally turned north again and met up with 52 going east. This road had no shoulder and quite a bit more traffic. Combined with the easterly wind, and this road was even less fun.

As we approached Yankton, the clouds quickly got grayer, and the skies quickly opened up on us. It happened too fast for me to get any rain gear on. Randy and I rode for about a mile through downpour and headwinds. We climbed several rollers with truck traffic spraying up water and long streamers of rain, then finally pulled in under a tree. We stood for about a minute, and Randy said, “No use standing under a tree, I guess. We can’t get any wetter than this.”

I had switched out my sunglasses for yellow panes, but they fogged so badly that I eventually went without, blinking and wiping as I rode. In a strange way, I felt contented to be experiencing some hard-core rain riding on this tour, since we’d encountered almost none so far.

The rain reduced to mere spitting, and then stopped. Randy and I found the bike path turnoff from 52, south to the river bank. Pretty soon it felt like we were in RV heaven. We rode through miles of nicely kept RV campgrounds along the river, chock full of vehicles, families, dogs, and mesh gazebos.

Approaching Gavins Point Dam, we stopped at a bench perched at the waterline with a great view of the dam. Time for a good snack. For a while, Randy and I reflected on our tour of the Dakotas and talked about bicycle touring in general.

He stated an opinion that bicycle touring is about the ride, not about the achievement of doing it. I certainly concur. He said he wasn’t sure if he would continue on east past Ragbrai.

I disagreed with Randy on one thing. He stated that anyone could ride a bicycle across the country. I couldn’t agree with that. The circumstance or disposition of most folks is simply contrary to the task. Likewise, I believe that a rider such as Randy has acquired a great many cycling and camping skills that take years to amass. I think it is a special combination of fitness and guts and mindset that allows someone to do it, and not all that commonplace.

I hoped that Randy would continue east from Iowa. As I saw it, by the end of Ragbrai he’d be close to 2/3 the way across anyway.

I tried to phone Linda but Randy’s cell phone was out of range. Randy declined my offer to join the family by SUV for a few days, and decided to camp here in this park tonight, and so we said our farewells in front of a riverfront restaurant.

Randy had taught me a lot about camping and cycle touring, sometimes by word, but most often by example. I told him that my 2-week 840 mile trek with him had been great every minute, and this included all the good and all the not-as-good. It had been a real privilege to join him for it.

Five more miles to Yankton. I stopped at a convenience store and asked for directions to the Ice House. The clerk screwed up her face. “That place is colorful and not typical of Yankton.” I was intrigued already. She gave me directions, which were a little more detailed than I could remember, but it gave me the general idea.

I had to stop at one more convenience store to finally find it, and when I did I saw our empty SUV parked by the curb. Cool! Entering the Ice House, the barmaid asked me, “Can I help you?”
“I’m looking for my family.”
“Well, they’re not in here.” There was a collection of laughter from the scruffy patrons, who seemed to be a friendly drinking crowd. I liked the place right away.

I exited the bar, and finally saw my family walking towards me from the riverside park! Everyone looked so good to me! We bought some beer from the Ice House, took it over to the park, and sat for an hour sharing travel stories. My, it was SO GOOD to see my family again.