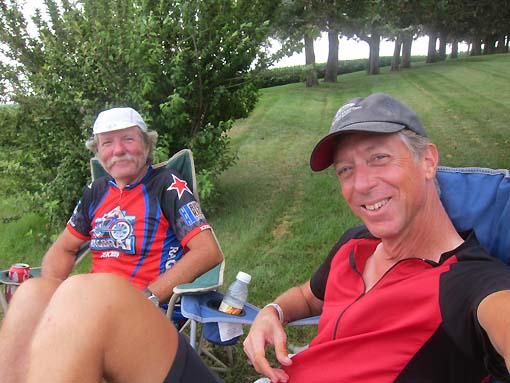 Yet another excellent day at Ragbrai.  As has been the trend, wi-fi and especially electricity has been difficult to come by.  I’ve been trying to keep the laptop charged so I can at least write, but my phone has been dead.  No wi-fi for a couple of days either.  I could go out of my way for it (at the library for example), but there are too many other things to do.

Overcast skies today kept the temperatures lower, only into the low 90s.   Starting in Altoona IA, we travelled more Iowan farm roads into the towns of Mitchellville, Colfax, and Baxter.   I’d actually say that today’s towns did not prepare very much that was memorable, that is, no live bands or unusual exhibits that I saw.  A couple of houses set up big water slides and it was great fun to watch drunk cyclists do fast macho zips down the slides, ending with a big belly flop in the mud.  Other than that, the normal array of food at every turn: ice cream, BBQ, pork, etc.,etc.

In the town of Colfax, Jack and I talked to a couple of locals who sent us over to the Weitner corner drug store for a milkshake.  We found a real live 50s-style ice cream parlor/soda fountain place.  And no lines!  They made their milkshakes with real ice cream and malt and milk, excellent stuff.

Yesterday, my pie source (Kelly’s) told me that it was their last day for this year, so today I ended up buying a piece of apple pie to go from some church ladies.  Later, I saw Kelly’s table during the ride.  What? Sorry, Kelly.

You run into strange riders at Ragbrai.  I just love the guy or gal who approaches alone from the rear with the road completely clear, like 100 yards in front and behind clear, then brushes closely on the left while calling out, “On your left!”  I usually respond by leaning slightly onto the pedals and blasting by such riders without a word, never to see them again.  Sometimes I think they just like to hear themselves say “On your left!”

A fair amount of hills nearing the end today before rolling into Grinnell IA.  This town has a little bit of significance to me since Janel seriously considered this school for college, and she and Linda even visited here.   I found Jesse in camp and we soon set out to find a beer.  Jack found us before we left and joined us.  I also tried to coordinate a meeting with Phil and Paul downtown which never worked out.

Purchased a new bike trunk, since a tube of “diaper rash” ointment exploded in my old one.  Last night I tried to wipe it all out but it was just too greasy and smelled like, well, like babies.  [The diaper rash ointment was an experiment – a cheap alternative to cycling chamois butter.  Well, a somewhat failed experiment.]  I then had a beer and some remnant pieces of Jack’s pizza at Pizza Hut.

Jack and I spent the next hour at the main stage downtown watching a fun band do some fun tunes.  I’m not going to say they were great, but had some good vocals and played a few tunes really well (Toto’s “Rosanna” and The Tubes “Talk To You Later” in particular), and they did some crowd-pleasing funk-disco as well (you know, Sly and K.C.).

Now back in the green pod, enjoying my apple pie.  Sorry Kelly, but the church ladies make better pie.  62 miles today.  I’ll continue to say that Ragbrai miles are luxury miles.  And I’m really glad we inserted Ragbrai into the plan.  Riding it without any support, other than the Ragbrai truck, is a lot of fun.  It pushes you out of camp and into the town where things are going on, tons of people are around (including locals from all around the area), good food is available, and the well-funded Ragbrai concerts each night can be good.  Looking forward to tomorrow.