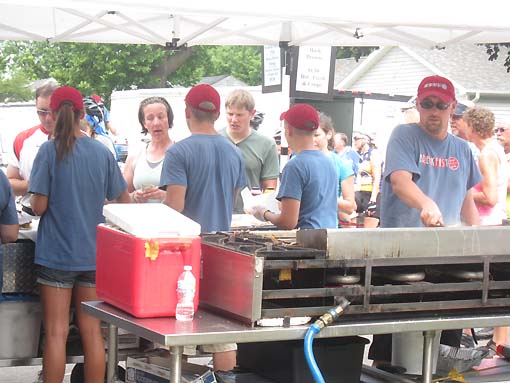 Another typical great day at Ragbrai.  Morning spin with Jack away from Boone, through the little town of Luther which had practically nothing set up.  At the 22 mile mark we found Slater IA and at least there were a few breakfast options.  In fact, we had fun watching the operations of the breakfast muffin guy (an oversized knockoff of an Egg McMuffin).  The guy working the egg griddle was a maestro.

Lots of little Iowan town after that, spaced fairly close together. Sheldahl, Alleman, White Oak, Elkhart…  None of them really stood out for me, having the typical array of travelling food vendors and a few small local efforts.  I continued to disconnect and then reconnect with Jack which is fairly amazing in this sea of riders.  I think that’s because even if we don’t ride at the same pace always, it seems we’ve got sort of the same rhythm in enjoying this event, stopping at plenty of places and finding good spots to hang out.

We were riding together when we spotted Roger clanking an empty can against a sign that read, “BEER FREE WATER.”  It was in front of a home that did not have a license to sell beer at Ragbrai, but anyone can “give” it away and then accept donations.  These are fairly infrequent and golden finds.  The host typically makes some bucks because people are very generous in donating, and the beer usually flows like water.  At this house, not many people stopped so Roger was doing what he could to get the party revved up.  Inside of about 10 minutes, he’d herded in about 40 riders and had to stop, else the beer would would run out too quickly.  He was a riot calling them in.

I bought some “tent pie” early, and enjoyed plenty of yummy treats during the day – breakfast egg-sausage muffin, ice cream, four or five Sprites, four or five gallons of water, popsicles, three snow cones.  Wherever a live band was playing was a natural stop for me.  Most of them were garage bands, and some sounded like they were practicing on stage, but it was all fun.

Jack and I rolled together into Altoona, our destination town tonight.  The Ragbrai truck operations are really great, and every story we heard about problems finding your gear or a decent campsite have been wrong so far.  Jack and I set up in a lovely sports field right by the trucks along with about 5,000 of our cycling friends.  I decided that a shower was in order (since the last one I’d had was in Sioux City) and so utilized the mobile shower setup.  We then scored a really fine smoked beef brisket dinner, with beans, chips, and water at the concession right here in camp.  Sweet!  And I mean, this sandwich was overflowing with choice tender smoked brisket – excellent stuff.

Jack and I met several nice people camping around us, then took off on the bikes downtown, hitting an ATM in the process.  Our real destination was the Altoona Aquatics Center where a huge concert setup was prepared.  I mean, it looked like a mini Woodstock – Altoona IA did a GREAT job with this.  Huge grounds lighted up, huge stage, big sound mixer station, beer bar at the rear, rows of outhouses.  A real production.  The main act was Grand Funk Railroad.  I do not know how many of them are original memners, but they put ona great show, with very talented musicianship.  These guys are GOOD.  Vocals are excellent, sound quality excellent.  Some Kind of Wonderful.  I’m Getting Closer To My Home.  We’re an American Band.

So now I’m eating my peach-raspberry pie and recounting the day.  Does it get any better?

About 58 miles today.  This was probably the easiest day of Ragbrai riding on paper.  Jack and I only sporadically see our other RA groupmates… Roger, sometimes Gary or Jesse or Bill, and we haven’t seen Frank since day 1.  Likewise, we’ve seen Phil and Paul in their Pork Belly camp, but rarely on the road or in towns.  In this way, Ragbrai is a wonderful week of fun for us all, sort of a “midway” of delights at a fair.  The “Sturgis” of cycling. Or maybe the “Mardi Gras.”  By the way, I’m told that Lance Armstrong is here and rides in tiny doses along the route, but Jack’s and my schedules are just too full each day to meet with him.